You woke to a clear, crisp morning at Iramoko Marae. After a hearty breakfast you met with Sylvia Tapuke. Sylvia talked about the journey you will take over the next few days. You will travel across the Taupō supervolcano following in the footsteps of tohunga Ngātoroirangi. On this journey you will talk to local iwi and scientists to see how volcanoes have formed and how they affect those who live near them.

You wanted to complete the web conference at the marae but work had begun on a farm nearby and the quiet valley was filled with the noise of fence posts being bashed into the ground. You headed out to the coast at Matatā in search of a quieter spot to talk to Alfriston School. It took a while to find enough coverage to complete the conference but eventually you succeeded. Ben Kennedy and Graham Leonard joined Sylvia to answer students’ questions. It was great to see how much curiosity these students had and learn more about supervolcanoes. Before long you realised that supervolcanoes are volcanic centres rather than a single volcanic cone. These systems don’t have super eruptions often. The last Taupō super eruption was 25,500 years ago. Graham reassured us that it would take hundreds of years for Taupō to build up enough magma to produce a super-eruption. You can find out more by listening to the recorded web conference.

After the web conference you spoke with Pouroto Ngaropo who you met yesterday during the Pōhiri at Iramoko Marae. Pouroto talked about the battle of the maunga and how the volcanoes had moved. Taranaki was banished to the coast after being defeated by Tongariro. Pouroto also talked about the three iwi who live in this area. Ngāti Awa, Ngāti Tuwharetoa and Ngāti Rangitihi. These iwi all have a common ancestor Ngātoroirangi who came on the Te Arawa waka from Tahiti. Ngātoroirangi was a powerful tohunga who journeyed from Maketū to Tongariro and helped bring fire to this area. You can learn more by watching the video.

The Pacific Ring of Fire

Pouroto took you to Kawerau to see Mount Pūtuaki. Ngātoroirangi climbed Pūtuaki in preparation for his climb of Mount Tongariro. He told you about the love story of Pūtuaki and the rivalries between mountains. Pūtuaki is one of many volcanic cones in the area and Graham talked about why we have volcanoes in the North Island. Graham explained that like earthquake activity, volcanoes in New Zealand usually occur along the plate boundary. Beneath New Zealand, the Pacific plate is pushing into the Australian plate and is being forced down into the Earth’s mantle. This creates a zone of subduction where the plate melts. Magma rising from this subduction zone produces a line of active volcanoes known as a volcanic arc. Most of New Zealand’s active volcanoes are caused by this process. New Zealand’s volcanoes are part of a larger zone of active volcanism at plate boundaries that rim the Pacific Ocean – the "Pacific Ring of Fire". Pouroto talked about the geothermal energy of this area. This energy is used to generate electricity and hot springs attract many visitors to the area. You can find out more by watching the video.

An hour’s drive south brought you to The Buried Village. This museum and tourist centre gives visitors an insight into what occurred during the night of 1 June 1886. There had been no warning of an eruption. Kiharoa Milroy a local teacher, talked about how some people had foretold the eruption. The day before, a party of tourists claimed that they had seen a Māori war canoe appear out of the mists on Lake Tarawera. It was being paddled by Māori in traditional dress and disappeared when it got close to the tourist boat. A tohunga, in Te Wairoa claimed that it was a waka wairua, or spirit canoe, and that it was an omen of a great disaster which would strike the land. In the early hours of the next morning, people were woken by violent earthquakes. Outside, the sky was lit up by lightning. Later it was reported that Mount Tarawera had split open. A huge column of fire could be seen shooting up into the air, forming a black cloud of smoke and ash. Molten rocks were flung out of the volcano, landing in the lake with a hiss.

Later that morning a rain of rocky ash and mud fell from the sky. People watching took refuge in the whare of Te Wairoa. The ground kept shaking, and a hail of ash and hot mud struck the village. Some houses, with people still inside, were buried. Other houses were left empty as their owners fled the village. You could see the half buried whare that have been excavated from the rocks, ash and boiling mud which buried them during the eruption. You can find out more in the video.

Before it got dark Ben took you to a spot where you could find out more about how volcanologists work. He called it his playground. At first glance it didn’t look much until you realised that you were looking at a record of old Tarawera eruptions. Ben showed you different layers of ash and logs that had been burnt and buried. These layers tell us about how big and how explosive old eruptions have been. It was incredible to see how much ash has erupted. You can see this in the video.

It has been a fantastic day exploring the spectacular country that has been shaped by volcanic activity. Tomorrow you will continue your journey across the Taupō supervolcano. 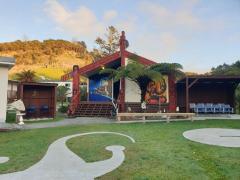 You woke to a beautiful morning at Iramoko Marae. Image: LEARNZ. 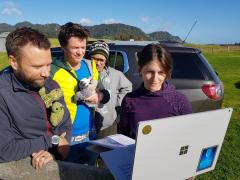 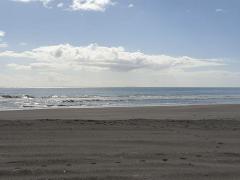 Out at the coast you could see the active volcano Whakaari, White Island steaming on the horizon. Image: LEARNZ. 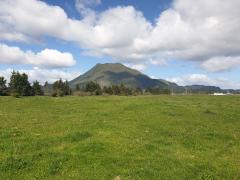 Mount Pūtuaki is an old volcanic cone close to Kawerau. Ngātoroirangi climbed Pūtuaki during his journey from Maketū to Tongariro. Image: LEARNZ. 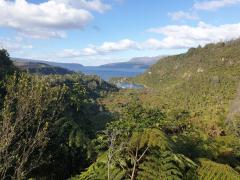 Looking across Lake Tarawera to Mount Tarawera which erupted in 1886. Image: LEARNZ. 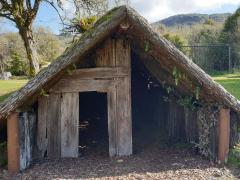 This whare was partially buried during the 1886 Tarawera eruption. Image: LEARNZ. 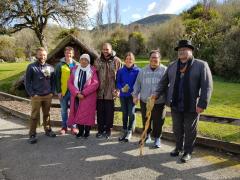 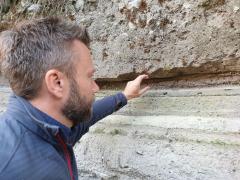 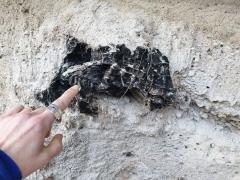 This burnt log is preserved in layers of ash. What do you think this log can tell us about previous eruptions? Image: LEARNZ. 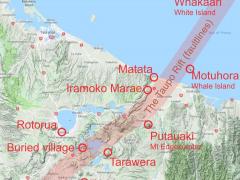 This map shows the volcanic arc and the areas you visited today. Image: Graham Leonard.