You had to be up early this morning to help with the milking at Thorvald and may have been surprised to discover sheep in the dairy shed rather than cows.

Thorvald is nestled in the Neudorf Valley about 40 minutes’ drive from Nelson. You arrived at the farm in the dark to meet Julie. Julie and her partner own and operate a farm which supplies milk to Thorvald. Julie is proud of her flock and knows many of them by name. She explained that these girls have been bred specially to produce lots of milk. You could see that sheep are milked in a similar way to cows. Technology helps monitor the process. The milk that each sheep produces is recorded and even the milking cups have an automatic shut off so the sheep are not over milked. It didn’t take long for Julie to milk a flock of 80 sheep but this is not the end of the process. Julie has to keep this area clean and wash down all the milking equipment with hot water and a special cleaning solution.

After milking you were keen to try some of the milk. You may have expected the milk to taste quite different from cow’s milk but it actually tastes very similar, only creamier. Sheep milk is not common in New Zealand but historically people started drinking sheep milk long before they tried cow’s milk. Sheep milk was also used for making cheese and yoghurt. Feta and Roquefort are well-known cheeses that have traditionally been made with sheep milk, so it’s great to see these cheeses and others now being made in New Zealand.

Once you had finished an extra creamy cup of coffee you and Julie met with David the owner of Thorvald. You then connected with Te One School to complete the web conference. Te One School is in the Chatham Islands so it was neat to be able to talk to them and answer their many questions about animal welfare and food safety. You can find out more by listening to the recording of this web conference.

Thorvald began making sheep milk cheese and yoghurt last year and David was keen to show you how this is done. Before milk can be turned into cheese or yoghurt it has to be pasteurised. This involves heating the milk to over 80 degrees Celsius for about 15 seconds to kill any harmful bacteria. The milk is then cooled and culture added to make yoghurt. Francis is the cheese and yoghurt maker at Thorvald and you watched as he poured yoghurt into containers ready to incubate. After incubation, the yoghurt will set and then it is chilled ready for eating. David had some yoghurt for you to try and again it tasted similar to yoghurt made with cow’s milk but seemed thicker and creamier. This yoghurt has been really popular and I could see why.

Cheese takes longer to make and involves separating the milk into curds and whey by adding rennet. Rennet increases the acidity, causing the milk proteins or casein to tangle into solid masses or curds. These curds are then pressed and drained. Different types of cheese have different amounts of moisture in them. Once the cheese has been made it is soaked in salty water to preserve it and add to the flavour. The cheese is then left to mature and moulds can to added to create different tastes. You could see racks of cheeses stored at certain temperatures and levels of humidity and discovered that soft cheeses may only be aged for a few weeks while hard cheeses can be aged for up to two years to create a stronger flavour. You were lucky enough to be able to try a whole lot of different cheeses and I was impressed with the variety of great flavours.

Making the most of sheep milk

Before Thorvald cheese and yoghurt can be sold it must be tested to ensure it meets standards and doesn’t contain any harmful bacteria. Products are then carefully packaged to keep them clean and then refrigerated. Labels tell customers more about the nutritional value of sheep milk. Analysis shows that sheep milk has more vitamins, minerals, energy and protein than cow’s milk and is easy to digest. David talked to you about the ‘use by dates’ that allow them to track all their products and know which sheep the milk originally came from. Products are then refrigerated and transported to shops. You can find out more in the videos.

It has been a day of new experiences and tastes, and I hope you have enjoyed discovering how to get more from sheep. 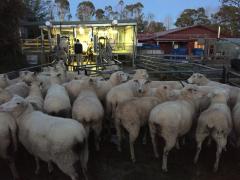 Sheep awaiting milking outside a specially designed milking shed. What differences do you think there are between this shed and a shed for dairy cows? Image: LEARNZ. 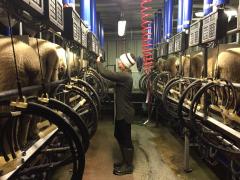 Julie milks sheep to supply milk to Thorvald where it will be made into cheese or yoghurt. Image: LEARNZ. 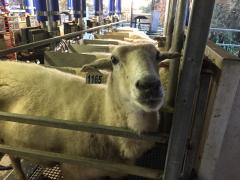 These sheep have been bred to produce lots of milk. Which sheep breeds are known for their milk production? Image: LEARNZ. 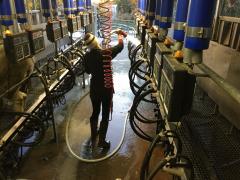 After each day's milking Julie has to clean all the milking equipment. Why do you think hygiene is so important? Image: LEARNZ 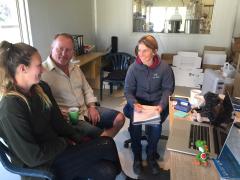 Julie, David and Shelley talk to Te One School during the web conference. Image: LEARNZ. 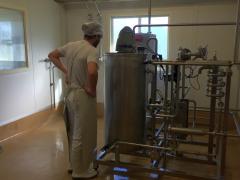 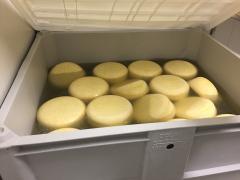 Cheese is placed in brine; this salty water preserves the cheese and adds to the flavour. Image: LEARNZ. 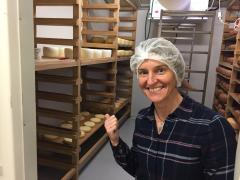 Shelley checks out some of the Thorvald cheeses. Image: LEARNZ. 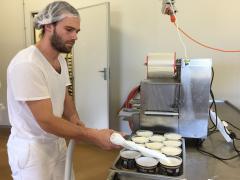 Francis pours yoghurt into containers ready to be incubated. What is yoghurt made from? Image: LEARNZ. 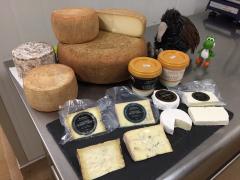 Time to taste some of the final products. Image: LEARNZ.