The Argo Float programme involves scientists from 45 countries. The purpose of the programme is to collect data about the oceans and help us learn more about climate and weather.

The name ‘argo’ comes from an old Greek story.

Jason gathered a team of 50 people and started his voyage on a ship called 'Argo'. Together they were known as the 'Argonauts'.

The name argo from the Greek story was chosen as the name of the robotic floats to emphasize the strong relationship between data from Jason (the satellite) and data from the Argo Floats.

The Argo Float programme is an example of successful international co-operation. Scientists from 45 different countries have worked together and agreed on how Argo data should be collected and used. 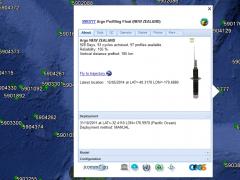 Next step learning:  write down three advantages you can think of in scientists working together rather than all by themselves.