The air and the sea exchange gases such as carbon dioxide. Ocean currents are caused by tides, winds and changes in water temperature and salinity.

The sea is the salty water that includes the Arctic, Atlantic, Indian, Pacific and Southern Oceans. The sea covers 70% of planet earth. The sea moderates the earth's climate and has important roles in the water cycle, the carbon cycle, and the nitrogen cycle.

The air and sea are very closely connected

Gases move backwards and forwards between the sea surface and the air. Sometimes the movement of these gases is part of a cycle, for example the carbon cycle.

How easily gases are able to move between water and air depends on the sea conditions:

The sea is always moving. When huge masses of sea water move they cause currents. Here are the main reasons for why there are currents in the oceans.

Deep ocean currents are caused by changes in water temperature and salinity. These change the water’s density. Deep ocean currents are sometimes called submarine rivers and cannot be detected easily except where they come to the surface. When the current comes to the surface it's called an upwelling. When the water sinks it is called a downwelling. Argo floats that stay at 1000m for 9 days at a time are shifted around by these deep currents. 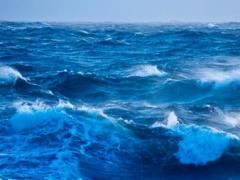 The surface can be very different from the rest of the ocean below. Colder water and salty water are both more dense and sink causing ocean currents. Winds stir up the surface water. 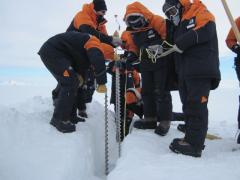 Sea ice forms on top of sea water. Salt is squeezed out of the ice as it freezes and collects under the ice. This makes the sea water more dense. Image LEARNZ

Next step learning: find out about a large ocean current; its name, where it starts from and goes to and what effect it has on the weather