What is an Argo Float?

Argo Floats are robots that float at different depths in the sea collecting information. They surface every 10 days and send their data about temperature and salinity to a satellite.

An Argo Float is a steel float weighing about 25kg, with instruments inside. An Argo float is able to do three things:

By changing its own buoyancy, an Argo Float is able to float at different depths. It changes its floating depth regularly every 10 days like this:

*Note that changes in technology now allow the Argo Float to send data to satellites in 20 minutes rather than several hours. This means it has to spend less time on the surface where bad things can happen to it eg getting hit by other floating objects.

How do Argo Floats measure the ocean?

that explains what an Argo float is, how it operates and how the data helps us understand ocean circulation and climate.

While the Argo Float is underwater it measures three things about the ocean:

While the Argo Float is on the sea surface it sends its information to a satellite. This information is called ‘data’.

When the Argo Float comes to the surface every 10 days it sends the following data to a satellite:

The position of the Argo float tells us how far it has moved since the last time it came to the sea surface. The position is given as latitude and longitude.

Regular Argo Floats are the ones described above. They are steel cylinders about 1.2m long and weighing about 25kg. They are designed to be strong enough to descend to 2,000m below the surface of the sea.  At a depth below 2,600m they will crush and be destroyed.

Deep Argo Floats are designed to go down to depths as far as 5,000m. The pressure at this depth is 2.5 times greater than at 2,000m where Regular Argo Floats descend to. Deep Argo floats are glass spheres not metal cylinders. A sphere is able to withstand much greater pressure than a cylinder. The voyage of the RV Tangaroa in June 2014 will test the new Deep Argo Float. 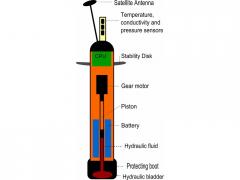 A regular argo float is a steel cylinder about 2m high. It contains a battery, a buoyancy device, measuring equipment and a satellite antenna. Image source 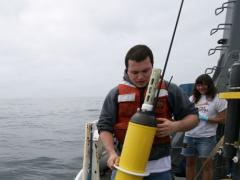 An Argo Float ready for deployment. 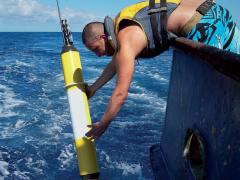 An Argo Float being deployed over the side of a ship.

Next step learning: Find out about other research in to the deep oceans