You have survived your first night aboard the Tangaroa but some of you may be feeling better than others. Sea sickness is a funny thing, not everyone suffers from it but often people get over it after a couple of days at sea. I’m hoping that I will find my sea legs sooner rather than later!

After leaving Wellington in the dark it was great to wake up and climb up to the Bridge to see where we were. You could still see the east coast of Wairarapa so you knew that you still had a lot of travelling to do. The northerly wind was making the ride a little bit bumpy as RV Tangaroa had to steer into the wind. The boat pitched and wallowed at times making everyone hang on to the railings so they didn’t fall over. Apparently we will arrive at our first Argo Float site at around 1am tomorrow so the scientists on board have been trying to adapt to their new rosters of either 3pm to 3am or 3am to 3pm. The ambassadors thought that sounded as if it would be pretty hard to get used to.

The first audioconference was with Elm Park School and Kiri Kiwi, their ambassador, had been looking forward to talking to her class. The students had thoughtful questions and Phil explained that the Argo floats are not collected after they have sent their data. They are left in the sea to continue collecting data and one Argo has kept working for an incredible nine years. Most floats don’t actually stay on the surface; they sink so they are not a problem for passing ships and wildlife.

Deep ocean currents are sometimes called submarine rivers and cannot be detected easily except where they come to the surface. Argo floats that stay at 1000m for nine days at a time are shifted around by these deep currents. You can listen to the audioconference to find out more.

The alarm rang and you headed to the muster station to go through a drill of what to do if you have to abandon ship. You were all allocated jobs such as preparing the life rafts, throwing the ladder down and giving out the survival suits. It was nice to know that this was all so well organised but hopefully you will never have to test the theory.

Tomorrow you will see some of the scientists at work and help deploy the CTD. 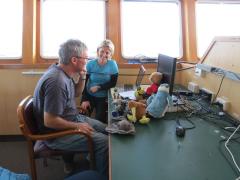 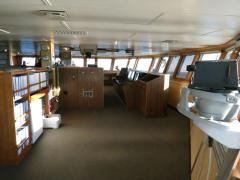 On the Bridge of RV Tangaroa. What does Tangaroa mean in Māori? 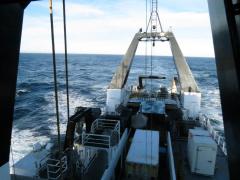 Looking back over the boat to see where we have come from. Which side would you see the North Island coast - from Starboard or Port? 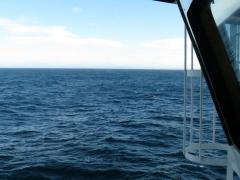 Nothing but sea out here. What wildlife might you expect to see on this journey? 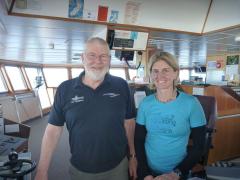 Roger is the Captain of RV Tangaroa and he has been Captain for 23 years. 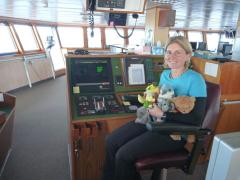 Shelley and the ambassadors try out the Captain’s chair. Who helps the Captain with his work? 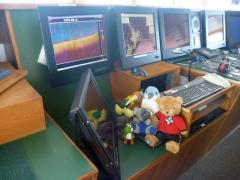 The ambassadors take a closer look at some of the navigation equipment on board. What technology is used to help navigate the ship? 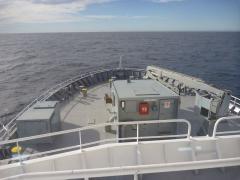 Looking out over the bow of RV Tangaroa. Why do we need to travel so far from New Zealand on this trip?