PhD Student at the University of Auckland and NIWA.

I like to learn a new skill onboard because I know that there are lots of opportunities to practise while you are on the voyage so you can gain experience doing that particular task. Also many months after the voyage you start to see the results of the analysis of data you helped to collect and this is an amazing feeling: your contribution to a study that is helping everyone to understand how our oceans work.

Odd working hours but after just a few days you get used to it and it’s not too bad actually! You see amazing sunrises that you wouldn’t normally see if you get up at a later time in the morning.

My doctorate research is focused on the eastern boundary currents off New Zealand which bring both the warmest and coldest waters into the region. I will study changes in the currents that influence the climate and the local physical environment thereby impacting biota including fisheries off the east coast of New Zealand.

When you have to collect lots of samples you need for example lots of bottles and you have to be very organised in the way you tag and name the bottles to give no room for confusion. Onboard we often find that a big job like washing, tagging and naming bottles is better done when you split a big task into several small ones. Working in teams is very efficient and important to save time and keep everybody busy.

One time my watch’s mate and I were drawing samples from the CTD cast. We were a bit tired since we had a long watch. We tried to collect a water sample from a bottle and nothing came up from it. We panicked as we thought we had ran out of water on that particular bottle even before we sampled it. It turned out that we had forgotten to open the nozzle that allows air to enter the bottle so that water is released from the spigot. It wasn’t too dramatic but we learned that attention is crucial when you perform a repetitive job: no matter how many times you do it you still have to keep an eye on it!

I have a BSc in Geophysics and Mathematics and a Masters in Geophysics from VUW, New Zealand (Physical Oceanography). Currently starting my second year as a PhD student at the University of Auckland and NIWA. This is my third voyage around New Zealand waters and the Southern Ocean.

My family - we have a young son who keeps us busy.

Watch the video where Denise talks about her emerging career as a scientist (18Mb mp4 file). 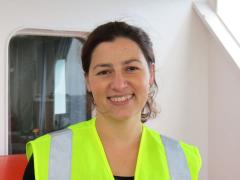