This morning we went rafting on the Tongariro River. One of the goals was to see whio on the river. In the afternoon we went looking for tiny river critters. We finished off the day looking at native freshwater species at the National Trout Centre.

The day started with our first field trip web conference. Krysia Nowak and James Cooper were our experts. It was an interesting discussion with a few schools taking the opportunity to ask questions. The recorded version can be accessed from the web conferences page.

After some morning tea we met up with Garth Oakden from Tongariro River Rafting. Garth took us for a white-water rafting experience on the Tongariro River. This is a great way to get outdoors and experience a river habitat and its surrounding wildlife up close.

It was lots of fun bouncing along down the rapids. You can check out the action in today’s video. It was also exciting to see a pair of whio and their chicks on the river. As you may have read in the background pages, whio are a great water quality indicator. If the water is clean with lots of food, the whio will like it.

Seeing whio means the Tongariro River is in a healthy state. Seeing whio also means that people have been helping to trap predators such as stoats, rats, and weasels. These animals prey on whio, a threatened endemic species. Garth and his wife Leigh are the founders of the Blue Duck Project. It was set up to bring whio back to their traditional habitat along the Tongariro River. Today, there are 800 traps set along 40 kilometres of the river, and it is common to see whio while rafting. You could say it is Garth’s way of giving back to a river that has provided so much for his rafting company over the years.

What a great rafting trip we had. It was so good to be able to experience the clean, clear, cool water of the Tongariro River in this way. I certainly recommend paying Garth at Tongariro River Rafting a visit if you ever come by this way. I know Egbert and I are keen to do it again!

We worked up an appetite on the river. So, after lunch, we met up again with Krysia and James. Our first task was to search in the Tongariro River for little critters known as macroinvertebrates. These are animals that do not have a backbone, e.g. an insect or worm.

It was easy to find some of these macroinvertebrates. James worked at brushing some off a rock at the edge of the river and Krysia held a net to catch them. They transferred the critters to a tray filled with water. Then we went about identifying them using an identification chart. I was amazed at just how many macroinvertebrates they were able to gather in such a short time. You might like to try a similar activity at a stream or river near you.

The types of macroinvertebrates that are living in a river are a good indicator of the river’s health. Some macroinvertebrates, such as caddisfly, stonefly, or mayfly, like cool rivers without too much sand or mud and they do not like pollution. Therefore, to find plenty of these macroinvertebrates would show that a river is in a healthy state and that the river food web is stable. Species near the top of a food chain, like trout and whio, rely on a good supply of such invertebrates.

From the river we went with James to the Genesis Freshwater Aquarium at the Tongariro National Trout Centre. The aquarium is quite cold and dark because that is how our native fish species like it. There is also water running down a long open fish tank, so it sounds as though you are right next to a river. The rest of the trout centre has all the information you need to know about freshwater ecology. It is a cool place to visit. You must stop and call in when you are next driving through this way with your parents - you will enjoy looking around.

In the aquarium there were both native and endemic fish on display. There were also examples of unwanted fish species. Many of our native and endemic fish are nocturnal and hard to see. It was great to be able to get up close and really study these guys. One night, you could try using a light to help you to look for native freshwater fish near a local stream or river.

Most of the species in the aquarium need clean, clear, cool freshwater to survive. If you ever find these animals, it is likely that the environment they are living in is healthy. Sadly, many of these species are in decline. We all need to play a part in making sure we do not lose any of our native and endemic fish species forever. James has some ideas of what you can do to help in the video.

It has been a fantastic first day of the field trip. I am looking forward to tomorrow. 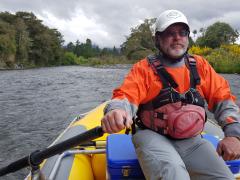 Garth Oakden is the owner of Tongariro River Rafting. It is a great way to get up close to the river and its wildlife. Image: LEARNZ. 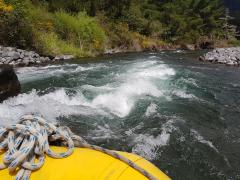 It is lots of fun bouncing along down the rapids. Image: LEARNZ. 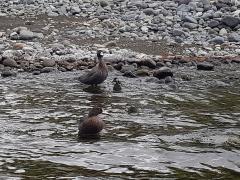 Whio are becoming a more common sight on the Tongariro River. What has helped their numbers grow? Image: LEARNZ. 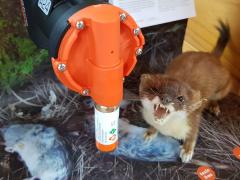 Predators like these stoats are targeted in a network of traps along the Tongariro River to help whio populate. Image: LEARNZ. 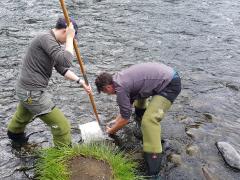 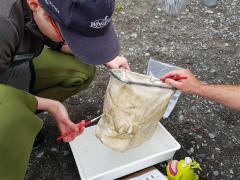 Krysia and James carefully empty the macroinvertebrates out of the net and into a tray of water. Image: LEARNZ. 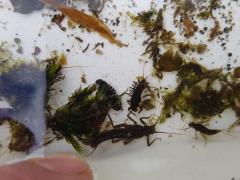 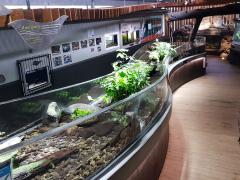 The aquarium and the National Trout Centre. Why does it need to be kept cool and dark? Image: LEARNZ. 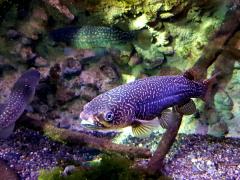 This giant kōkopu is one of 5 types of what that are commonly eaten in New Zealand? Image: LEARNZ. 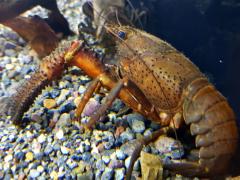 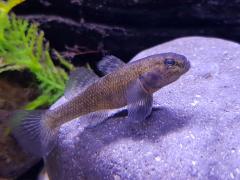 This common bully is not so common after all - at least not throughout the rest of the world. It is only found in New Zealand. Image: LEARNZ.