This morning the ambassadors and I headed to the Ministry for Primary Industries (MPI) in Whangārei. I was looking forward to discovering more about the knowledge and tools being used to manage kauri dieback.

We began our day with the second field trip web conference. Our expert was Travis Ashcroft and our speaking school was Pukekohe Intermediate. It was another enjoyable session with some thoughtful questions. Great to have other schools on board too, with time at the end for extra questions.

After some morning tea in the MPI staffroom, Travis talked to us about some of the technology being used and developed to help fight kauri dieback. One tool used to manage kauri dieback is aerial surveillance. This involves flying close to the ground in a grid pattern and taking photos of areas where there are kauri. The photos can show kauri dieback symptoms such as yellow leaves and thinning foliage. Once these sites are identified, the next step is getting down on the ground to find out why a tree looks sick. Often this involves taking a soil sample and having it tested in a laboratory to see if kauri dieback is present.

The only problem with aerial surveillance is that sometimes a tree shows symptoms of kauri dieback but doesn't have it at all. There might be other reasons why it is showing these symptoms. Kauri can also have the disease for a long time before they show any signs of it. So images that show what looks to be healthy kauri, may not be at all.

Even so, aerial surveillance has helped to create maps of where the disease has spread so far. This information can then be used to make decisions about what needs to be done in an area to help stop further spread of the disease.

NB: if you would like to find out more about how kauri soil samples are taken and how they are analysed, watch the following videos from the 2015 Kauri Dieback field trip:

A new tool being developed is called remote sensing. Remote sensing is technology used to create maps without having to physically touch the area being mapped. Remote sensing technologies are usually operated from a plane or satellite.

Travis showed us a map that had been made using remote sensing. I was amazed that this technology was able to show different types of trees within a forest. Watch the video where Travis explains more about remote sensing.

Not far from the business district of Whangārei is AH Reed Memorial Park. The park is a remnant of the original Northland kauri forest. Maturing kauri trees known to be at least 500 years old can be easily viewed close up from a raised walkway through the forest canopy. It was here that we went next with our experts.

It was good to be back in a forest setting and up close to some big kauri. I get such a good feeling from being next to these magnificent trees. We talked about an app the Kauri Dieback team are using to record details about kauri. The data is linked to GIS (Geographic Information Systems) software. It can be used to inform future work in that area. It can also clearly show changes to the trees over time when data data is compared at a later date. Data collection is always an important part of field work, and the app makes it much easier to do this. You can watch the video to see the app in action.

Finally today, Travis talked about Mātauranga Māori. This belief system as it relates to kauri, means that the forest is one big interconnected system. The health of kauri forests can therefore be monitored by observing the health of other species that live there, such as birds, plants, and insects. These species are called cultural health indicators. The idea is that stress in a forest will show up in these indicators. The health of these indicators may inform whether the disease is present, as well as the level of impact this is having on the forest.

It was another great day which ended with a drive to Auckland. Our last day of the field trip will finish in the Waitākere Ranges. 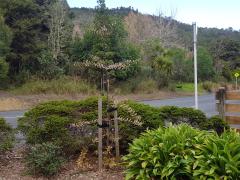 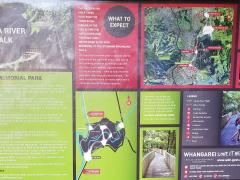 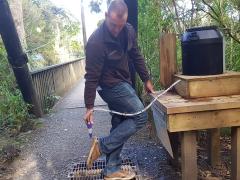 How does cleaing your shoes help when entering and leaving a kauri area? Image: LEARNZ. 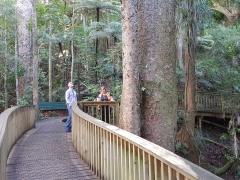 What are the advantages of having boardwalks for viewing kauri? Image: LEARNZ. 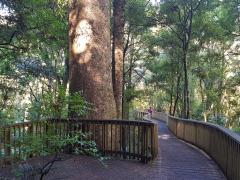 It's a humbling experience being up close to such massive, old kauri. Image: LEARNZ. 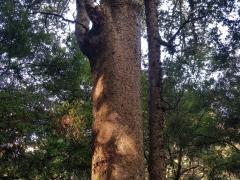 One of the old kauri with plenty of growth left in it at AH Reed Memorial Park. Image: LEARNZ. 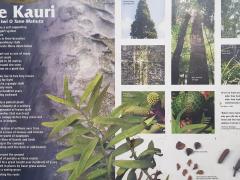 You might like to read this poem I found on an information panel at AH Reed Memorial Park. Image: LEARNZ. 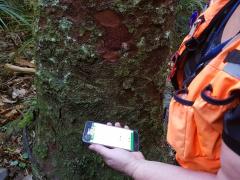 Taking a measurement from a kauri tree. This app helps make the data recording process out in the field so much easier for scientists. How else might technology help in the fight against kauri dieback? Image: LEARNZ.