Matariki signals the Māori New Year. It is a time of renewal and celebration in Aotearoa New Zealand that begins with the rising of the Matariki star cluster.

Matariki is the Māori name for the cluster of stars also known as the Pleiades or the Seven Sisters, in the Taurus constellation. Matariki is a shortened version of Ngā mata o te ariki o Tāwhirimātea, or 'the eyes of the god Tāwhirimātea', but it is sometimes incorrectly translated as 'little eyes'.

According to myth, the children of Ranginui, the sky father, and Papatūānuku, the earth mother, separated their parents. The god of the winds, Tāwhirimātea, was so angry that he tore out his eyes and threw them into the heavens.

Matariki rises in mid-winter and for many Māori, it is the start of a new year. In Aotearoa New Zealand it comes into view low on the north-eastern horizon. It appears in the tail of the Milky Way in the last days of May or in early June, just before dawn. According to the Maramataka (the Māori lunar calendar), the reappearance of Matariki, brings the old lunar year to a close and marks the beginning of the new year.

Matariki is not always celebrated at the same time

Various Māori tribes celebrated Matariki at different times. Some held festivities when they first saw Matariki in the dawn sky. Some celebrated after the rise of the full moon or at the beginning of the next new moon.

Matariki rises in the north east in early June. See how to find Matariki in this video. Matariki’s reappearance in the north-east sky is not visible in all parts of New Zealand, especially in areas to the west of mountains. For some iwi in Taranaki and Whanganui, and on the West Coast of the South Island, the new year begins with the rising of Puanga.

Matariki is a star cluster, not a constellation

A cluster is a group of stars that are near each other in space. When seen from Earth, the stars in a constellation appear to be close together in a pattern, but they may be a long way from each other. There are about 500 stars in the Matariki cluster, but only six or seven are visible without a telescope.

Some iwi speak of the seven Matariki stars as a mother and her daughters. The mother is Matariki, and her daughters are Tupu-ā-nuku, Tupu-ā-rangi, Waipunarangi, Waitī, Waitā, and Ururangi. Others have named nine stars, including Matariki.

Cycles of life and death

In the past, tohunga (priests or experts) looked to Matariki to predict the success of the next harvest. The brighter and clearer the stars seemed, the warmer the growing season would be, ensuring a good harvest.

Long distance waka voyages were not done in winter. Matariki rises in the night sky in mid-winter so Matariki was not used for navigation. Tohunga kōkōrangi (expert astronomers) used stars and star clusters to help them navigate great distances across the Pacific. Today, there is a revival of these traditional navigation skills. Crews have sailed double-hulled waka from as far as Rarotonga to Aotearoa New Zealand, guided only by traditional methods. 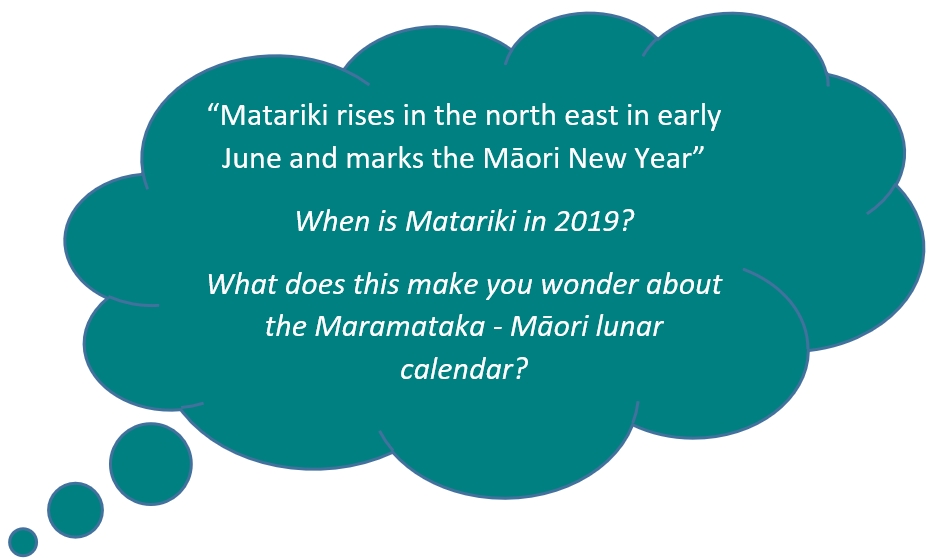 Matariki, or Māori New Year celebrations were once popular, but stopped in the 1940s. In 2000, they were revived. Only a few people took part at first, but in just a few years thousands were honouring the ‘New Zealand Thanksgiving’. A special feature of Matariki celebrations is the flying of kites – according to ancient custom they flutter close to the stars. Matariki is a time of remembrance, paying respect to those who have passed on and a time for new beginnings to plan for the year ahead.

Matariki festivals and celebrations happen throughout the country during June and July. Check your local council, school or marae for events taking place in your area.

Ready for a quiz? Try the "Matariki" activity.

How will you celebrate Matariki? 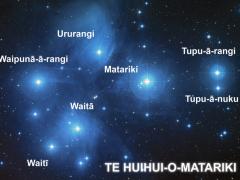 Matariki is a star cluster which rises in midwinter and marks the beginning of the Māori New Year. Image: Wikimedia. 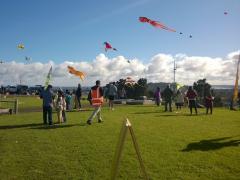 Some Matariki celebrations include flying kites. Why do you think this is? Image: Wikimedia. 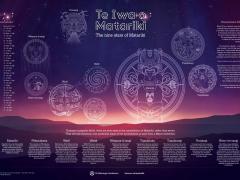 The nine stars of Matariki are thought to have power over different parts of the environment. Image: Te Wānanga o Aotearoa. 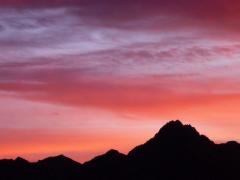