You woke early today, determined to make the most of the final day of your Icelandic adventure. It’s hard to believe how quickly the week has gone. When you first arrived in Reykjavik Ben introduced you to Anette Kærgaard Mortensen from Landsvirkjun, the National Power Company in Iceland. Anette talked to you about the Krafla Magma Testbed. It was great to catch up with Anette again today at the power station.

Anette is a geologist and she talked to you about how the Iceland Deep Drilling Project accidentally drilled into magma back in 2009. The project had planned to drill to 5 kilometres in depth. It all went smoothly until they got to 2100 metres deep. The drill hit a magma intrusion, a blob of molten rock left over from an eruption in the past. This magma is between 900 and 1000°C. Usually this would mean that the drilling had failed. But instead of plugging the bottom of the well with concrete, they lined it with steel and managed to control the magma. Then they pumped cold water down, right next to the magma, causing the rock to fracture and allowing ground water through. The hot, high pressure ground water was released up through those fractures into the well and, at the surface, turned into superheated steam. This was a world first and proved that drilling into magma to harness energy is possible.

This deep drilling project paved the way for the Krafla Magma Testbed, a project involving scientists from all over the world. Magma is a lot hotter than rock, so can generate a lot more energy. The challenge is to be able to drill deep enough to get to the magma and to be able to keep the well stable. It sounds a bit like a science fiction movie but it is hoped that this long-term project will lead to a reliable source of energy. Anette explained that this project will also help scientists to gain a better understanding of how volcanoes work. You can watch the video about this.

Anette showed you around the Krafla Power Station. When magma is close to the surface it heats the rocks around it. This geothermal heat is common in most parts of Iceland. When water runs down through the hot bedrock, the water heats up, resulting in hot springs on the surface and steam chambers underground. In low-temperature areas, hot water is mainly used to heat homes, while high temperature areas produce hot steam under pressure. Steam is led from boreholes to turbines inside the powerhouses of geothermal plants, transforming heat into electricity. Anette took you into the massive turbine room and then out to where steam is vented from wells. It was incredible standing next to a steam vent and hearing the roar of the steam escaping.

How to drill into rock

You met Marlène Villeneuve who is a rock engineer. She told you about the equipment needed to drill deep enough to reach magma. The drill rig isn’t like a drill you might use at home. These drills are more like mini tunnel boring machines where fluid is circulated to bring the chipped rock back to the surface to keep the hole clear. The hole or well is lined with steel casing to keep it open. You can find out more about how to drill into magma by watching the video.

Throughout this week you have visited some spectacular places and seen how Icelanders make the most of the volcanic landscape. People have learned over hundreds of years to respect the power of nature and not build in areas where volcanoes can erupt. Detailed maps have been made to identify areas at risk from volcanoes and earthquakes. Icelanders also have a strict building code. Marlène talked to you about how houses are designed to withstand earthquakes and the weight of ash and tephra from volcanoes. Icelanders have also come up with novel ways to protect property. You could think about the lessons that you have learned this week and how you might better prepare for natural disasters.

You have managed to fit a huge amount into your week-long tour of Iceland. It’s been a hectic few days but an incredible experience. I have learned so much about volcanoes and now appreciate the active land we live in that much more. You ended the field trip with a well-earned dip in the hot tub. You had time to reflect on all the awesome places you’ve been and people you’ve met. As the sky darkened you began to see the green glow of the Northern Lights and it was the perfect finish to an amazing journey.

I hope you have enjoyed the field trip as much as I have!

Mā te wā, see you on another field trip soon. 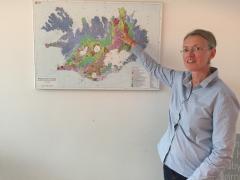 Anette shows you the location of the Krafla Power Station in Iceland. Image: LEARNZ. 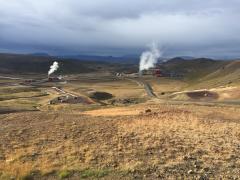 Looking out over the Krafla Power Station in Northern Iceland. Image: LEARNZ. 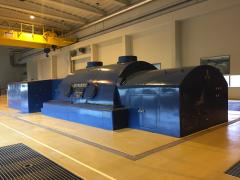 The turbine hall in the Krafla Power Station. This is where the thermal energy from steam is transformed into electricity. Image: LEARNZ. 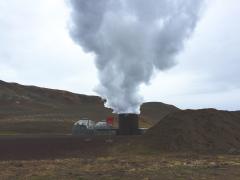 Steam roars out of a vent in an old geothermal well at the Krafla Geothermal Field. Image: LEARNZ. 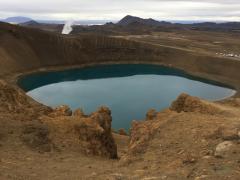 Veti Crater is close to the Krafla Power Station and well worth a visit. Image: LEARNZ. 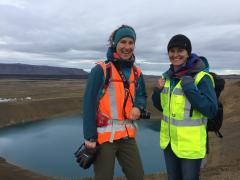 Marlène and Shelley enjoy a look around Veti Crater at Krafla. Image: LEARNZ. 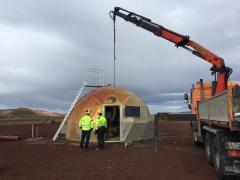 Maintenance work on one of the geothermal well heads at Krafla Power Station. Image: LEARNZ. 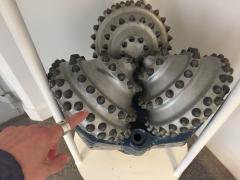 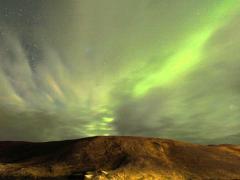 You watched the green glow of the northern lights from a geothermal hot tub on the last night of the field trip. Image: LEARNZ.