I am a physical oceanographer, but not many people know what that is. I try to understand the physics of the ocean, how and why it moves. We do this to better understand the marine environment and the ocean's role in climate change in order to provide sustainable solutions.

Day to day I lead a team of 11 biophysical scientists, they range from marine ecologists who understand the critters and their environments, dolphin and whale experts, to people who create simulations of the ocean with computers. We work with industry and government organisations on research projects.

I started out by studying engineering science at Auckland uni. I was heavily into sailing and was keen to become a yacht designer, this initially got me interested in oceanography. I went to the states and did a PHD at MIT. Returning to New Zealand, I worked at Otago Uni for 25 years. I taught, researched and supervised graduate students, the latter was one of the best parts of the jobs. I am a serial obsessionist, having worked on many things. While in Otago, I worked on the physics of human swimming and the physics of yachts in waves. A highlight was in the early 2000’s when I worked with Team NZ as their team oceanographer (making wave and current predictions).

I’m really driven by curiosity. Every day there is a new challenge presented, I really enjoy the creative process of finding solutions. I also love that I get to work with a diverse range of people.

My science obsessions include making highly detailed maps of tidal currents from measurements to better understand the physics of the tides, the interaction of atmospheric systems with the continental shelf and tidal energy; trying to understand how much energy we can make from large tidal turbine farms.

Deadlines when you are trying to be creative.

Currently we are trying to understand where things like plastic and pollution go, once they get into our ocean. The ocean is turbulent and chaotic, it is critical to determine how well parts of the ocean are connected. One way we do this is with computer simulations of the ocean.

One experience I am proud of started with an accidental conversation with someone who worked as a Biomechanic (someone who worked on making competitive swimmers swim faster). He was talking about the drag that slows people down while swimming. With my background working with Team NZ I had learnt that a large part of the drag on boats and swimmers is due to the waves they create. However, in swimming research their estimates were really low and didn’t reflect this.

Working together with the Biomechanic we were able to combine complimentary skills. We worked in a controlled facility where we were able to tow plastic humans underwater. We were able to show that the drag due to the waves was 50 to 60 percent of the drag on professional swimmers. The findings from this study meant that the swimmers could develop their techniques to lessen the drag and ultimately swim faster! I feel proud of this as it was outside of my normal experience but had a big impact in a specialist area.

One of the things I do is measure currents in the ocean, we do this on a moving boat using a fancy echo sounder. Often, we will sail around in circles for 13 hours (a tidal cycle) taking measurements to produce detailed tidal current maps. On one trip, we were several hours into our day and were feeling very frustrated as our instrument was performing poorly. I had checked everything, all the settings seemed fine, but I couldn’t work it out. Then the skipper said “Ross…. Did you check it before you put it in the water?”, which I replied “No……” He told me to have a look, I found that I left the protective cap on the instrument, which very much needs to be removed before use! It was one of my bozo moments. 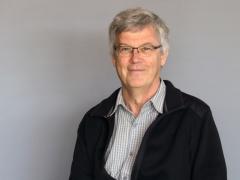