Eddy and I headed to Kerikeri airport this morning for a 9:45am departure to Auckland. A second flight would take us from Auckland to Napier.

The flight from Kerikeri to Auckland only takes about 40 minutes. As we flew south, I looked out of the left-hand side of the aeroplane and caught a glimpse of the bay and its many islands (hence Captain Cook calling the area Bay of Islands) before we climbed past the rain and above the cloud. With natural hazard preparation on my mind, I remembered a conversation I had with someone about volcanoes in Northland. My understanding is that volcanic activity led to many of the land formations in the bay.

I investigated this further and learned that the Northland region has two recently active volcanic fields. There is one around Whangārei, and another is the Kaikohe-Bay of Islands volcanic field. Their last activity was around 1300–1800 years ago which created several scoria cones in the area. Interestingly, one of these scoria cones is directly in line with the flight path when coming into Kerikeri. If you are on the left-hand side of the aeroplane, you should get a view of it! I have included an older photo of this volcanic cone in today’s diary images.

From the 2016 What’s the Plan, Stan? field trip to Auckland, we learned that Auckland is vulnerable to volcanic eruptions. Much of Auckland is built on this volcanic field. Although these volcanoes won’t erupt again, any future eruptions will occur in new, unknown locations. Likely hazards and effects of the next Auckland eruption depend on what type of eruption occurs and for how long. Auckland is also at risk from ash fall from active volcanoes in the central North Island.

Before long, it was time to go through security for the next departure. We made our way through the gate, boarded the plane, and found our seat. When all the passengers and bags were on board the doors closed, and we made our way onto the tarmac. Before take-off we listened to the safety briefing, then it was up, up and away!

As I looked out the window during the journey, I thought of how natural hazards are part of life in New Zealand. They have shaped the country’s stunning landscape but have also caused devastation and loss of life.

Many hazards are the result of New Zealand’s location. It lies across two moving sections of the earth’s crust, which are pushing against each other. Tsunami, floods, landslides, storms and coastal erosion are also potential hazards. On this trip you will learn how to identify hazards in your local area. You will also find out how to prepare for these to reduce their impact.

An hour later we landed in Napier. After picking up our bags and a rental car, we headed into the city for some lunch.

The first thing you might notice in Napier are the buildings. Napier is famous for its Art Deco buildings, a style that was all the fashion back in the 1930s. When a 7.8 magnitude earthquake destroyed the city in 1931, Art Deco was the style of construction during the city’s rebuilding phase.

In this area of the country you will be close to the Hikurangi tectonic plate boundary. This is the boundary between the Australian tectonic plate and the Pacific tectonic plate, and it lies just off the coast. This boundary could produce large earthquakes and tsunami. All the more reason to be alert during this field trip so we are prepared! 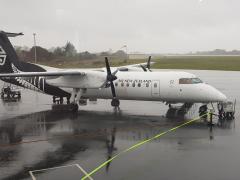 It was a wet and windy start in Kerikeri this morning. Image: Andrew Penny, LEARNZ. 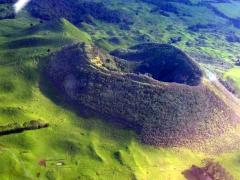 One of Northland's scoria cones created by volcanic activity 1300-1800 year's ago. You can see this cone from the aeroplane before landing in Kerikeri. Image: Andrew Penny, LEARNZ. 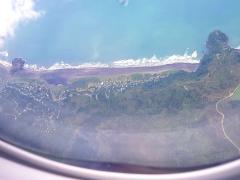 An area of west coast just north of Auckland. What natural hazard would you need to think about and prepare for if you lived in this area? Image: Andrew Penny, LEARNZ. 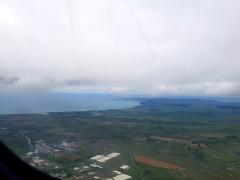 On our descent into Napier, looking over the Ngaruroro River towards Te Awanga and Clifton. Image: Andrew Penny, LEARNZ. 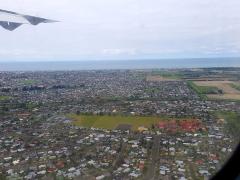 Getting close to landing now! Looking out over Napier City towards the coast. Image: Andrew Penny, LEARNZ. 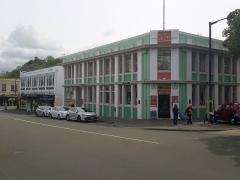 A typical Art Deco styled building in Napier town centre. This building happens to be the Art Deco Centre. Why does Napier have so many buildings in this style? Image: Andrew Penny, LEARNZ. 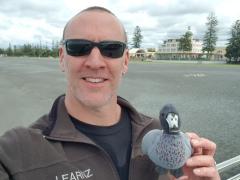 Andrew and Eddy at the beach in Napier. What should they do if there was a long and strong earthquake? Image: Andrew Penny, LEARNZ.