North Canterbury turned on a stunning day for us today. The cloudless sky and mild Spring temperature were perfect for exploring Tiromoana Bush.

We began the day with our second field trip web conference. Once again David Norton was our expert. Kaharoa was our speaking school. The students asked well thought out questions. These led to some great discussion and learning about ecological restoration. The ambassadors and I picked up quite a few tips for our own potential restoration projects.

If you missed the live version, you can always listen and watch the recording. You will find this on the web conferences page.

After the web conference we had a bite to eat and a cuppa. Then off we went with David to explore some selected parts of Tiromoana Bush. Our first stop was Kate Pond. This is a wetland created as part of the restoration project. It was lovely sitting at the picnic table chatting with David. He gave an overview of the goals for Tiromoana Bush and the basic plan of how to achieve these. Watch the video where David explains this in more detail.

David remarked about how much everything had grown around the wetland since it had been planted. This is one of the satisfying things about a restoration project. When you see progress there is a feeling of achievement. David got quite excited when we ventured further around the edge of the wetland to check progress on some planted kahikatea. It was cool to think how one day they would be towering above everything, just like the kahikitea in Riccarton Bush.

From Kate Pond we made our way to a new restoration area. It was basically an old section of pasture once used for grazing when Tiromoana Bush was a farm. A fence had been set up to keep rabbits and hares out. Doing this gives new plants a better chance of survival. Much of the grass had been sprayed as part of the preparation of the site. Again, this gives new plants a better start.

David showed us the mixture of plants that had been planted. It all looked a bit bare, but I guess you must start somewhere! I’m sure in a few years I’d come back and not recognise the place.

The next site we visited was a more established area of planting. We could see huge differences compared to the previous site. The plants were obviously bigger. One of the cool things was that the grass had begun disappearing under the shade of these plants. Instead there was the beginnings of a litter layer. Looking further you could see new seedlings sprouting up. This was the developing understory of what will one day be a forest.

What I also found interesting was that I could see dead gorse. David said that gorse can act as a nursery for new growth. Those plants then get bigger and shade out the gorse where it eventually dies. Maybe my least favourite weed is not so bad after all!

Natural succession (with a bit of a helping hand)

We headed further up the hill and it got cooler and darker. David had taken us into an area of established kānuka. There was an array of understory and forest floor plants that were quite thick in places. David said that these plants had only started growing once the grazing animals had been removed. Also, a greater variety of these plants had grown where one or two kānuka had been removed by some of David’s students. This had allowed more light to enter and a greater variety of plants, spread by bird droppings, had established.

David explained that this is a process called natural succession. By getting rid of the grazing animals, nature had been given a chance to fill in the gaps. The only plants they had planted in this area were tōtara. And they had to do this as no tōtara are nearby to allow them to spread naturally. One day these tōtara will become the dominant tree in the forest, with the kānuka mostly dying out as they make way for them.

It has been an awesome day looking at the restoration plan of Tiromoana Bush in action. I have only been able to give a summary of the day here in my diary. I encourage you to watch the videos where David gives a better explanation of it all – he is the expert after all! I guarantee you’ll not only learn something about restoration planting, but David’s enthusiasm will inspire you to get involved in it too. 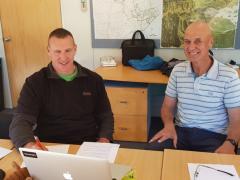 Andrew and the ambassadors with expert David Norton on this morning's web conference. Image: LEARNZ. 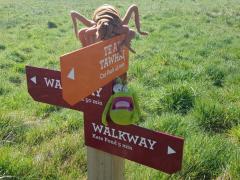 The ambassadors show the way to Kate Pond on part of the Tiromoana Bush track. Image: LEARNZ. 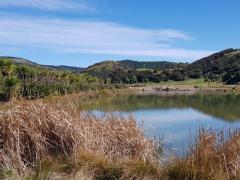 Kate Pond. Is this a natural wetland? Image: LEARNZ. 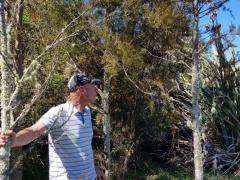 David stands next to some established restoration planting. These are kahikatea. One day they will grow tall and dominate this area around Kate Pond. Image: LEARNZ. 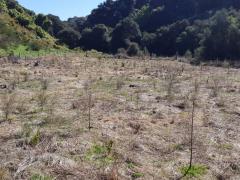 Here you can see a new restoration planting area. What has been done to help give these plants a good start in life? Image: LEARNZ. 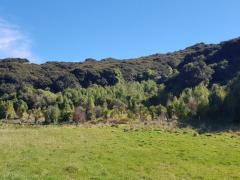 Heading towards a more established restoration planting site. How is this different from the previous site? Image: LEARNZ. 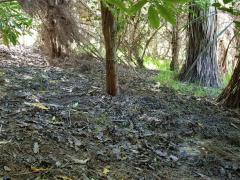 You can see how the old grass/pasture is being shaded out and stops growing as the restoration planting gets more established. Image: LEARNZ. 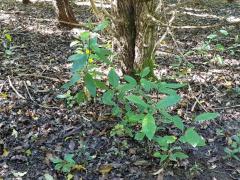 As time goes by, birds carry seed that starts the growth of a forest understory. Image: LEARNZ. 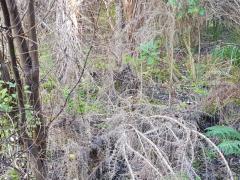 Here you can see how the gorse is overtaken by the restoration planting and eventually dies. Image: LEARNZ. 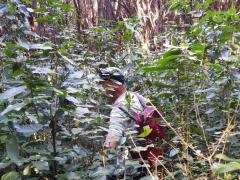 You can hardly see David as he makes his way through the variety of plants making up the undergrowth of this stand of kānuka. Image: LEARNZ. 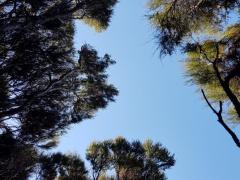 How has creating these breaks in the kānuka canopy helped the undergrowth? Image: LEARNZ. 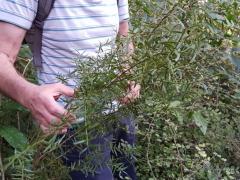 These young tōtara are the future of the forest. Why have they needed to be planted by people? Image: LEARNZ.