The importance of protecting a range of New Zealand marine habitats

There are also other marine protected areas outside marine reserves. These include marine mammal sanctuaries, benthic protection areas and mātaitai reserves. 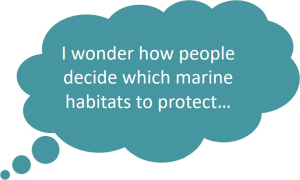 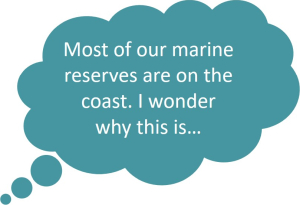 The rocky shore is a popular place for both people and animals. Here you will find rock pools and reefs. At high tide, water covers this habitat. When the tide goes out it exposes the reefs. Living things of the rocky shore must be able to cope with changing conditions because of the different waves, tides and weather patterns. What lives on a reef varies depending on its location and factors such as temperature and light intensity.

Sandy shores and beaches are areas of sand that cover an area of coast. Animals living here have adapted to live in or on the sand. They are often small and complex. Some animals of the sandy shore can burrow into the sand to avoid threats like waves and predators (e.g. crabs, shellfish, shrimps and urchins).

Sandy shores and beaches are important for birds, which feed here often. Many shorebirds also nest in the sand and dunes on beaches.

Zones of the rocky and sandy shore

This is the area of rocky shore or sandy shore between the high-tide mark and the low-tide mark. At high tide, water covers this habitat. Low tide exposes this zone, allowing us to walk around the shore. Living things in this habitat must be able to cope with ever-changing water conditions. This zone is light-filled: it can host plants and algae that photosynthesise. Animals have plenty of hiding places in this zone.

Water always covers this zone. It includes the area from the low-tide mark to the open ocean. There can be lots of waves and movement in the water, including currents, in this zone. Animals living here need to be excellent swimmers and/or adapted to hold on.

The open ocean extends out from the edge of the subtidal zone. Open ocean only includes water to a depth where light can still reach: the ‘photic zone’. Open oceans are often unprotected.

Some New Zealand marine reserves include areas of open ocean, such as:

The open ocean habitat is home to big predatory fish such as tuna, marlin, sharks. It is also home to large migratory species like humpback whales and sea turtles. Also, zooplankton are an important part of the food chain in the open ocean.

Deep sea habitat is below the open ocean. There is not much light in this area. Living things found in the deep water have adapted to these dark conditions. Deep-sea fish can look very strange. Some have big eyes to capture as much of the limited light as possible. Their skin is generally red or black, and some have enormous mouths.

Fiords are inlets of sea that glaciers carved out over a long time. Fiordland is home to many fiords and has a network of marine reserves. These special habitats are some of the more pristine and isolated areas in New Zealand.

Huge volumes of freshwater run-off from the steep land in the fiords washes all the tannins from the forest into the sea. The dark freshwater layer doesn’t all mix with the marine layer. Instead it sits on top, blocking out light further below. This means species adapted to low light conditions are present near the surface, e.g. black corals. Black corals are bright white but turn black when they die. There are also isolated populations of species, like the Fiordland bottlenose dolphin.

New Zealand is also responsible for some of Antarctica. The area is pristine and mostly untouched, with thriving ecosystems. It includes marine protected areas such as the Ross Sea. 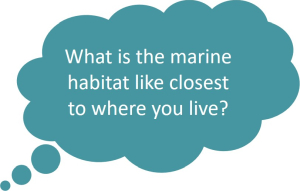 Check out Marine Reserve Habitats of New Zealand from DOC's Protecting our Marine Reserve education resource for activities to do before and after the field trip. 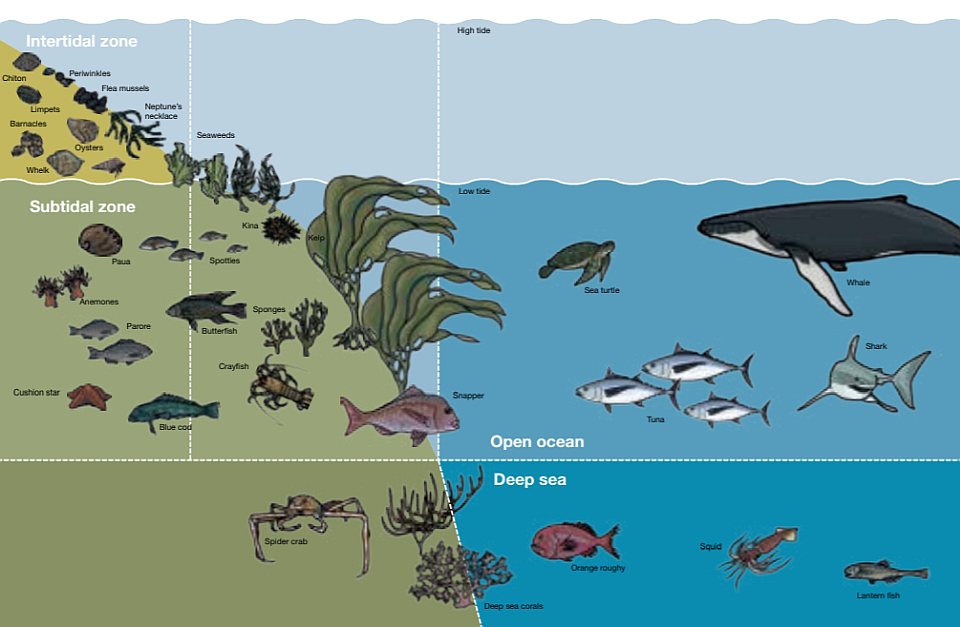 There are a wide variety of marine habitats in New Zealand that are home to lots of different species. Image: DOC. 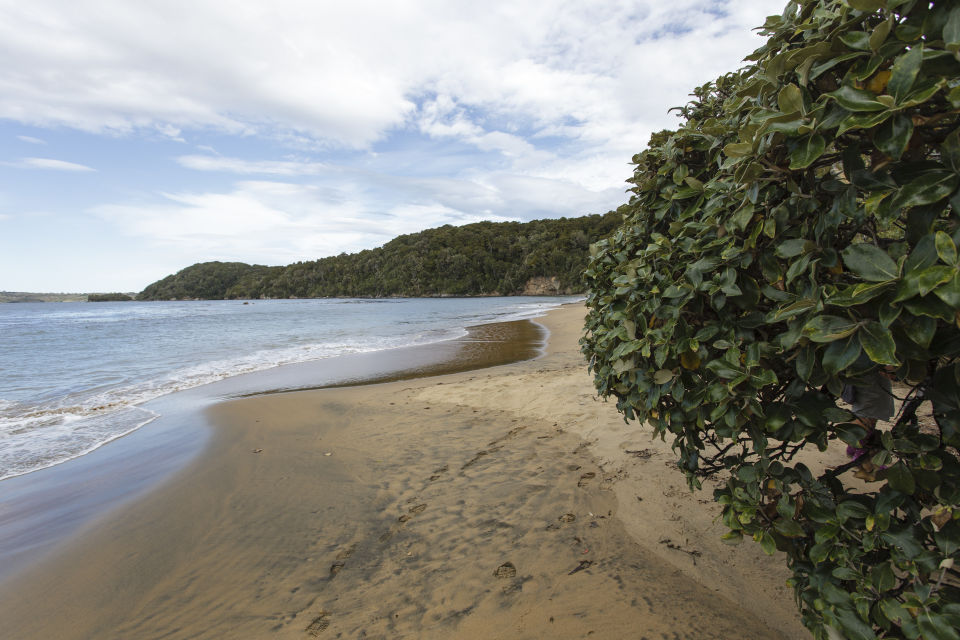 Sandy shores and beaches are areas of sand that cover an area of coast. Image: V Zintzen, DOC. 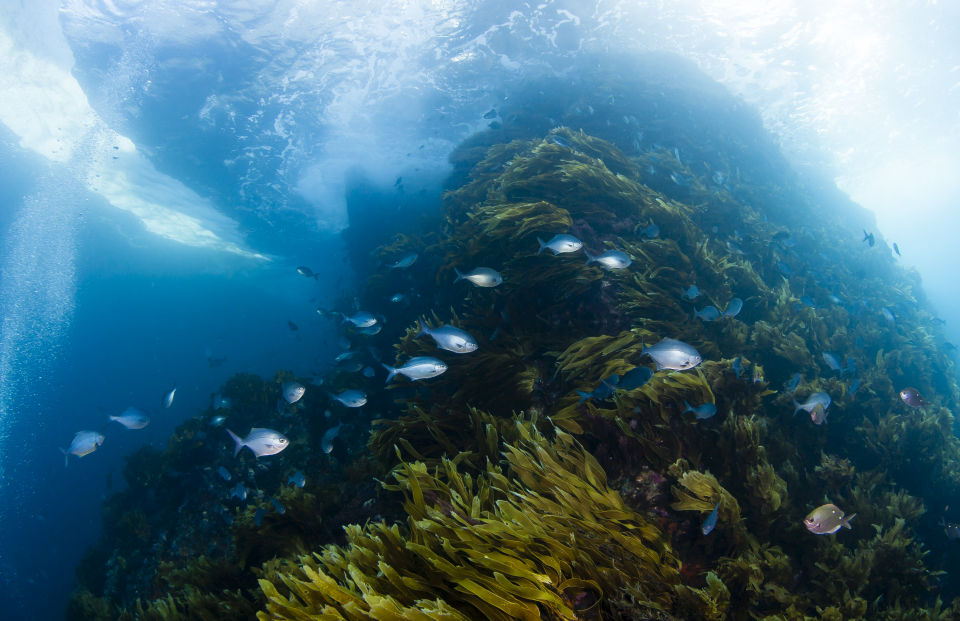 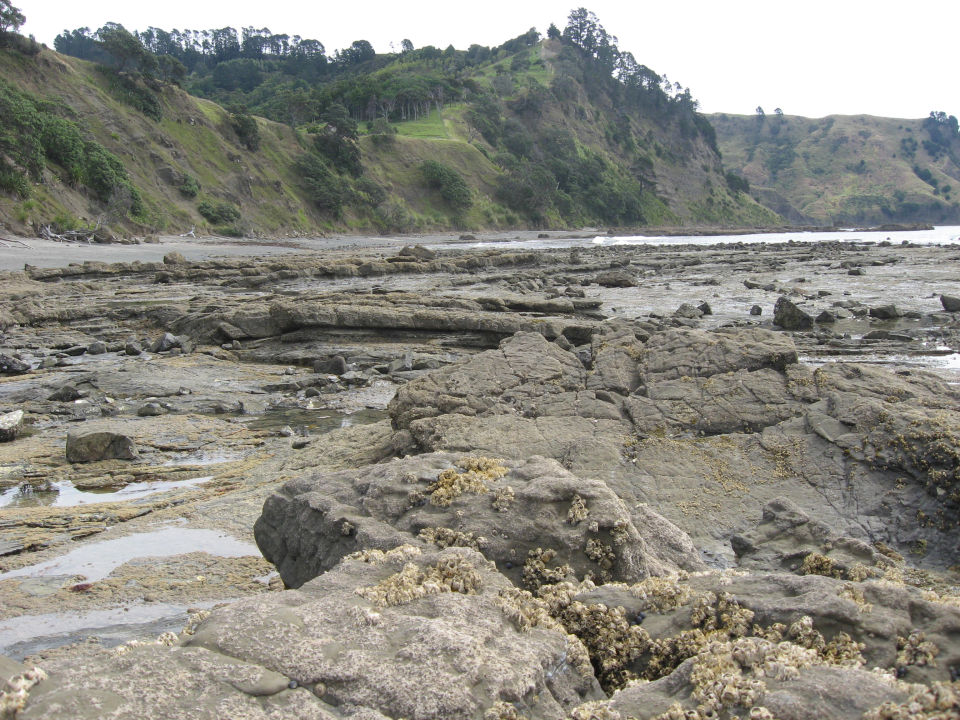 A rocky or sandy shore of the intertidal zone is exposed at low tide. What adaptations might animals and plants need to be able to live here? Image: Andrew Penny, LEARNZ. 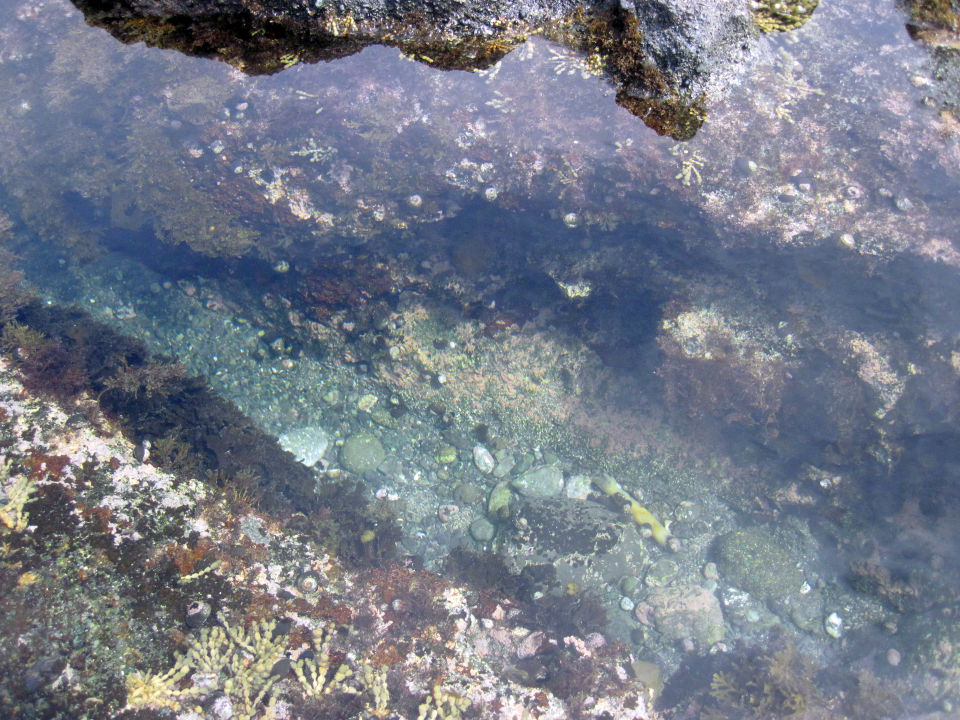 There are often rock pools on the rocky shore at low tide. What might you find living here? Image: Andrew Penny, LEARNZ. 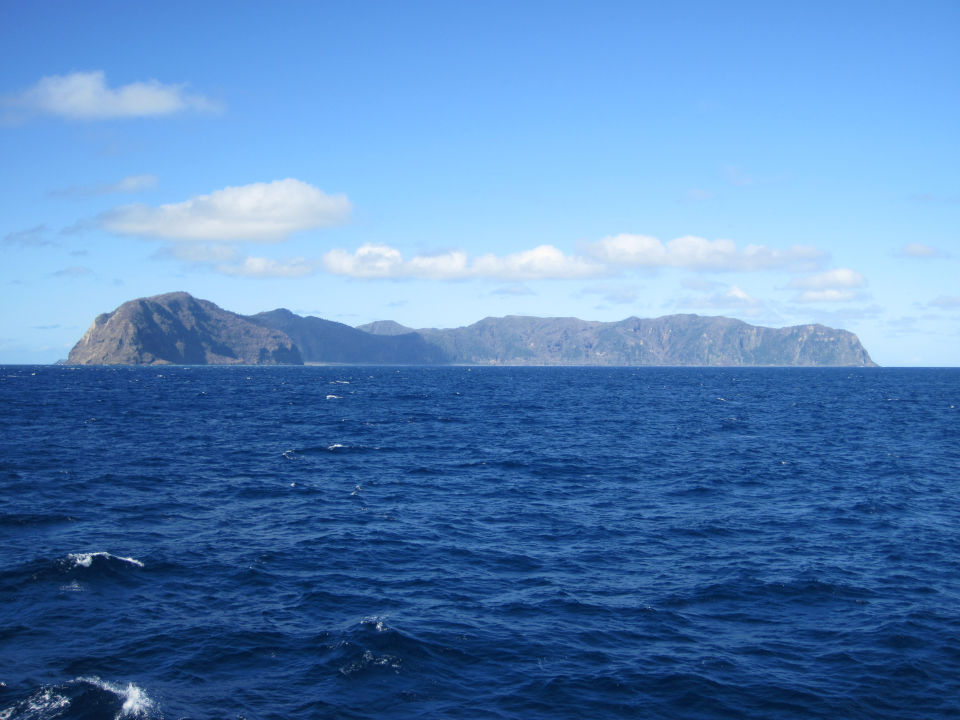 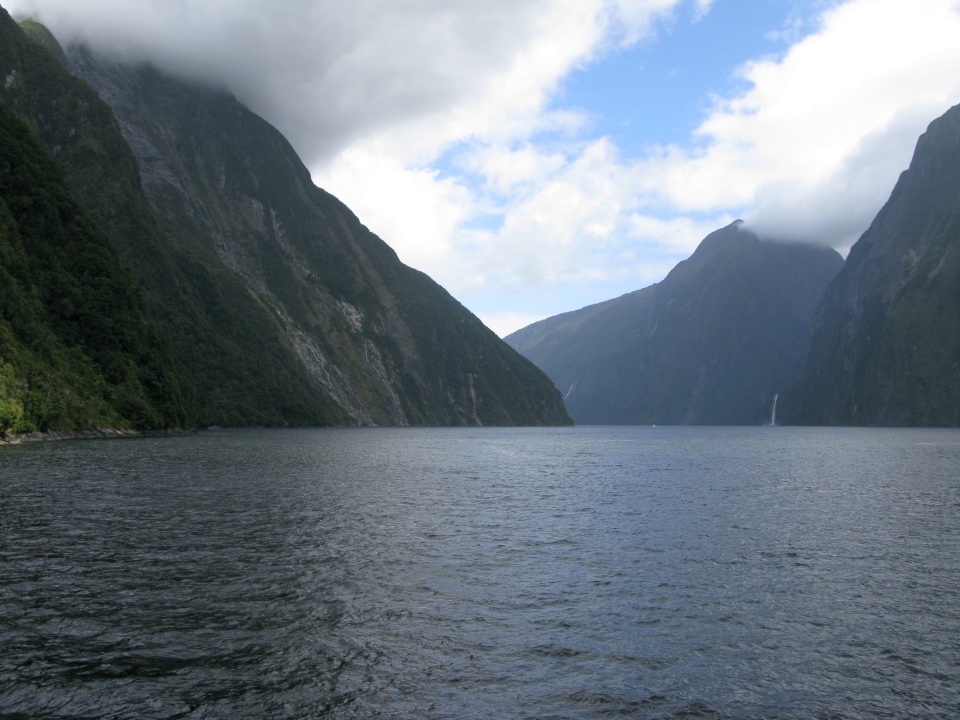 Fiords are another important marine habitat for New Zealand. Fiordland is home to many fiords and has a network of marine reserves. Image: Shelley Hersey, LEARNZ. 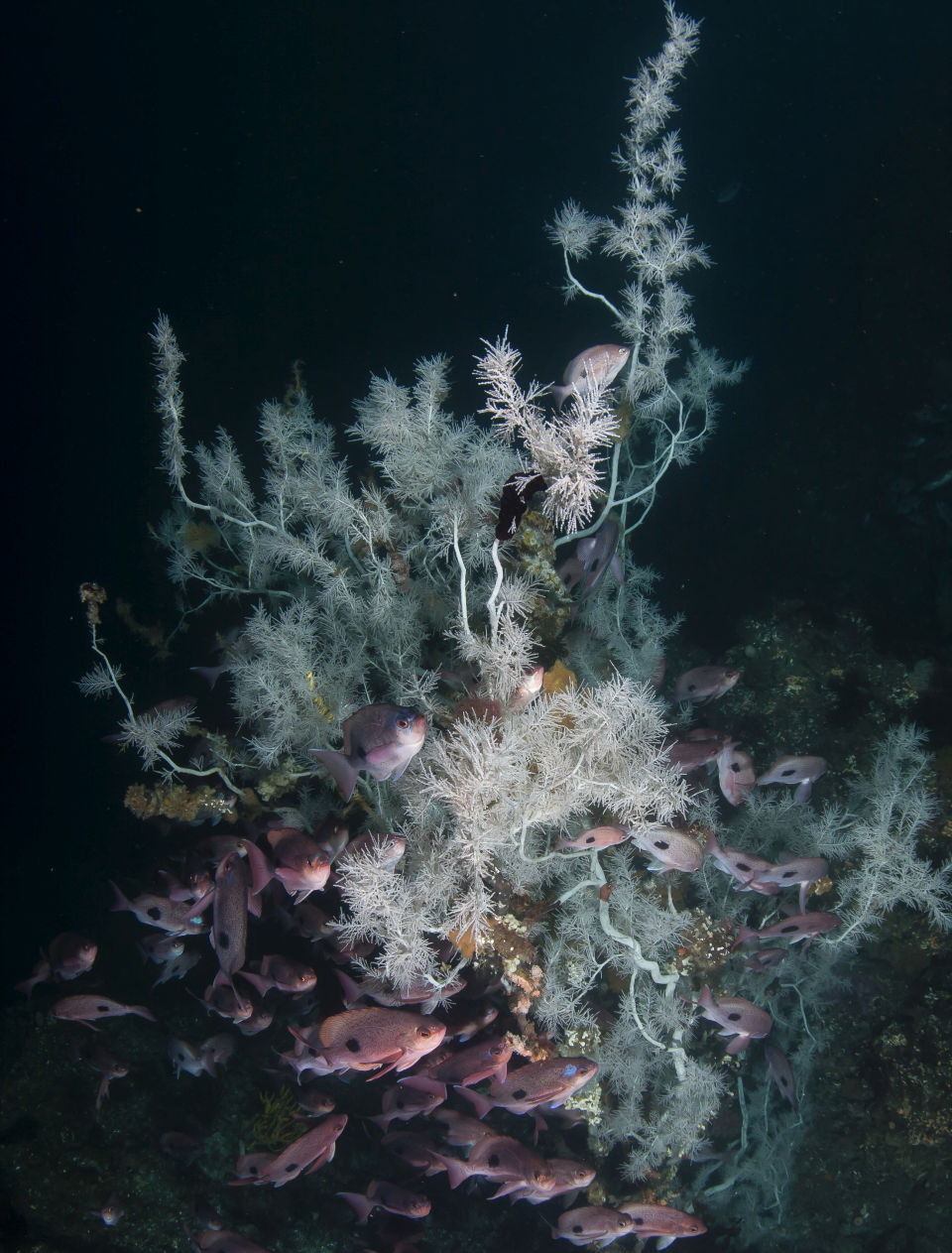 The dark freshwater layer in Fiords doesn’t all mix with the marine layer. Instead it sits on top, blocking out light further below. This means species adapted to low light conditions are present near the surface, such as this black coral. Image: V Zintzen, DOC. 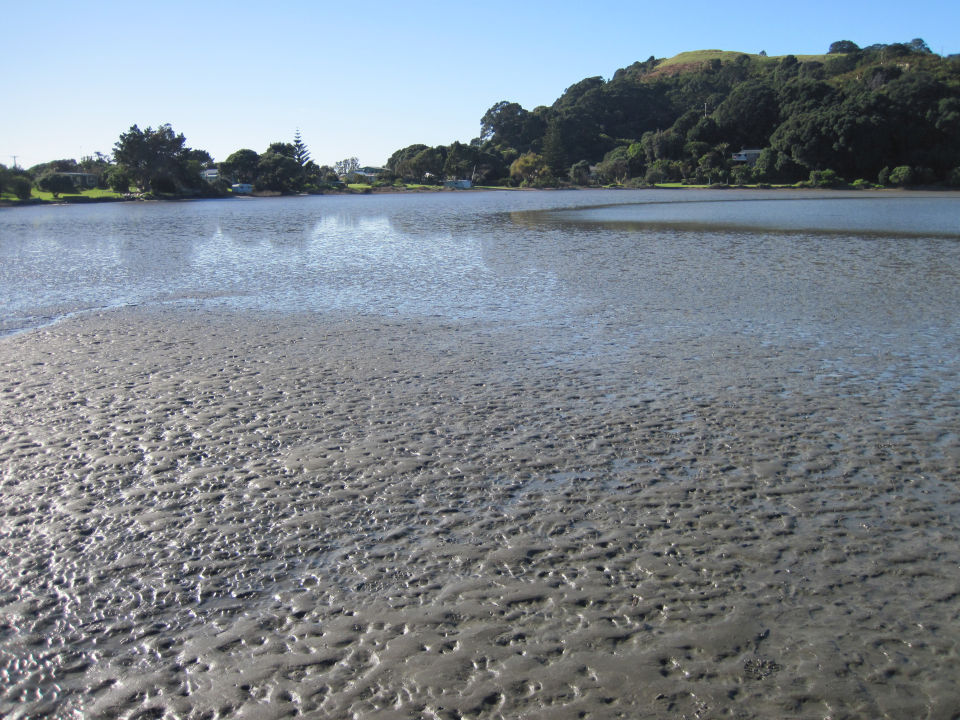 Estuaries support a large quantity and range of species. Their accessibility makes them a good option for marine based citizen science projects. Image: Andrew Penny, LEARNZ. 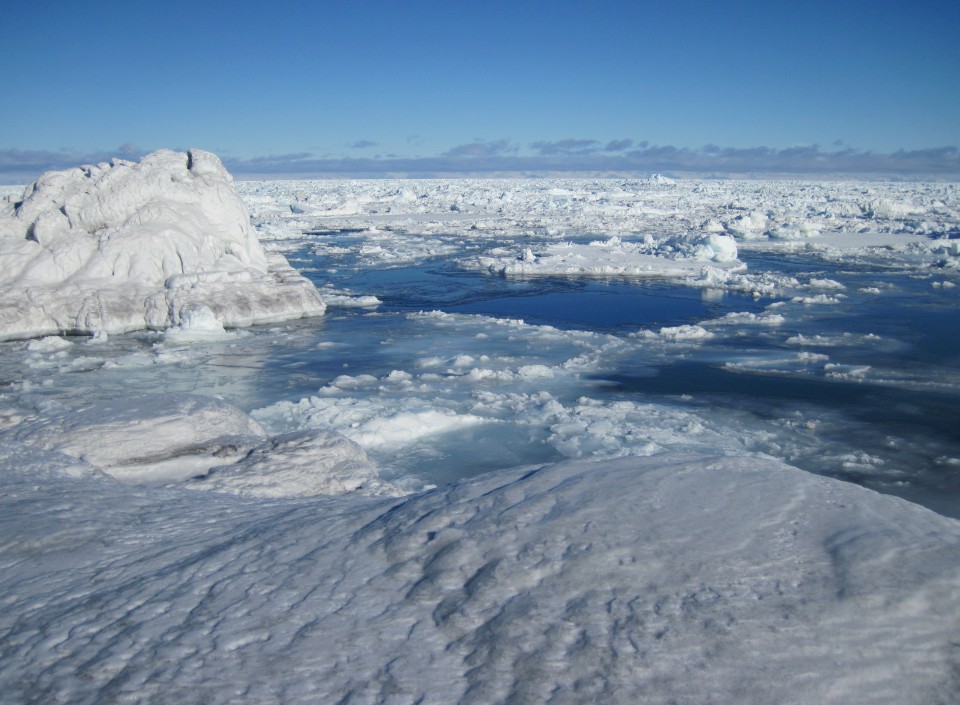 New Zealand is also responsible for some of Antarctica. It includes marine protected areas such as the Ross Sea. Image: Shelley Hersey, LEARNZ.