The Environment and Modern Landfills | LEARNZ
Skip to main content

The Environment and Modern Landfills

A modern landfill has to meet strict environmental conditions to be allowed to operate.

Modern landfills are very carefully managed to make sure they are environmentally friendly and are good neighbours to the land owners next door. In New Zealand a landfill needs to have consent under the Resource Management Act (RMA). Redvale opened in 1993 and was the first landfill to comply with the RMA.

Part of the consent process includes assessing all the environmental impacts. Here are some of them:

Ensuring that rubbish is always kept under control is very important. This often means locating landfills away from populated areas. Redvale is only 30 kilometres from Auckland CBD, yet it has still won a range of environmental awards.

Landfills use heavy machinery to transport and compact the rubbish.

Rubbish usually contains rotting organic material and other materials that smell. Transporting and compacting the rubbish must be done to avoid bad odours being released.

There are also mobile spray units and a perimeter spray curtain that neutralises odour coming from the landfill.

When rubbish is placed in the landfill there is a risk that the wind will pick it up and blow it away. At Redvale there are fixed and mobile litter fences that catch rubbish should it blow away.

Dust can also be an issue. At Redvale, dust levels are monitored and controlled with spraying.

A modern landfill is designed to be a long-term solution for storing waste. That means it needs to be in a place where there are no active earthquake faults that might fracture the ground and release liquid (also called leachate) into the groundwater.

Because rubbish is often light weight and easily blown away, a modern landfill needs to be protected from very strong winds.

Redvale landfill has a consent condition which means operations must be shut down when the wind exceeds a certain speed. 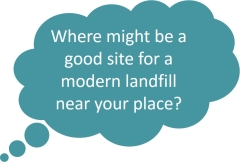 When it rains the water seeps down through decaying organic and inorganic wastes, forming leachate. Leachate contains poisons and must be collected and managed. At Redvale, leachate is collected and vaporized. A special landfill liner acts as a barrier between the waste and the ground. This stops leachate seeping into the ground and acts to channel the leachate to a collection point before being treated.

At Redvale, the landfill is capped with a thick layer of soil to minimise rainfall absorption. Rainfall that runs off the top of this soil layer is collected, treated, and the clean rainwater is diverted into streams.

LFG is produced as organic waste decomposes under anaerobic conditions. LFG contains up to 60 percent methane, a dangerous greenhouse gas. At Redvale, a system of wells within the landfill collects LFG where it is piped to a treatment plant. The LFG is then used as fuel to run 12 generators. The generators produce enough electricity to power up to 12,000 homes in the surrounding community.

Remote sensors monitor water in nearby ponds and streams. There is also monitoring of LFG, dust, as well as an on-site weather station. Information from these sensors is sent by coded signals on a computer based wireless system called telemetry.

It is normal for any project that disturbs the land to have a rehabilitation plan. This plan will describe how the land is returned to the same or better condition when the landfill comes to the end of its life. 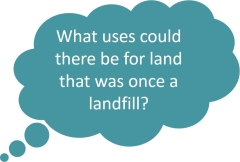 Challenge: Choose one environmental impact and describe how, in an older rubbish dump, it might affect the environment. 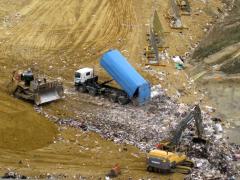 Making sure rubbish is kept under control at all times is very important. Image: LEARNZ. 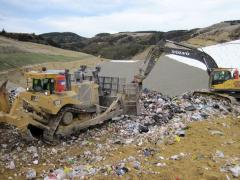 Landfills use heavy machinery to transport and compact the rubbish. Image: LEARNZ. 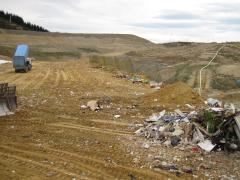 Wind-blown rubbish is a problem that needs to be managed carefully. Image: LEARNZ. 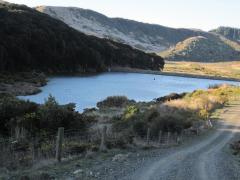 Rainfall that runs off the top of the landfill soil layer is collected and the clean rainwater is diverted into streams. Image: LEARNZ.