Wellington is known for its wild and windy weather. Our capital city is also known for its active landscape. Earthquakes, landslides and floods are common. Today you will be looking at why Wellington has earthquakes and which areas are most at risk.

You headed out to Lower Hutt to meet with Rob Langridge from GNS Science. Rob is an Earthquake Geologist and has spent years trying to understand earthquakes. Rob had given you the address of a place to meet near his office. It wasn’t obvious why Rob had chosen this location until he explained that you were standing on the Wellington Fault. You could see how the street dropped away along a relatively straight line. This line is obvious from the air and aerial photos are often used to help map faults like this. When a fault breaks or ruptures during an earthquake the land moves. This movement can be vertical or horizontal and leaves a scar on the land which can be mapped. Technology has made it much easier to map fault lines.

Rob talked about how LIDAR is used to give an accurate picture of the surface of the land. LiDAR (Light detection and ranging) works by shining a laser at the surface and measuring the time it takes for that light to bounce back to the receiver. Very fast computer systems can record this data and translate it into heights. LiDar is used to identify fault lines, and measure changes in land elevation. You can watch the video to find out more.

The last major earthquake to shake Wellington was not caused by the Wellington Fault. The largest earthquake ever recorded in New Zealand occurred on the Wairarapa Fault. During this quake, the whole Wellington Region was uplifted and tilted. More recently the Kaikoura earthquakes caused damage in Wellington. This is why it is important to know where active faults are. You can look on the GNS Active Fault Database to find out where faults are located.

You returned to GNS Science in Avalon for the web conference. It was great to talk to students from Kaikoura Primary School. Students wanted to know how earthquakes are monitored and Rob talked about GeoNet. GeoNet is a national monitoring network which monitors earthquakes, tsunami, landslides and volcanoes. Following the web conference, Rob took you to the GeoNet Communications Room. This is where geological events are recorded and analysed. It was amazing to see how often there are earthquakes. There are over 20,000 earthquakes every year in New Zealand but most of these are too small to feel. You can visit GeoNet to see where there have been earthquakes today.

You headed to Wellington City Council to meet with Derek Baxter (Bax) and Alex Robertson. Bax and Alex showed you some clever technology. This technology is helping people understand how Wellington responds to earthquakes. You could see the damage caused by the Kaikoura earthquakes in 3D models, simulations, and GIS systems. This technology is helping to identify at risk areas and share information. You can watch the video to find out more.

To prepare for future earthquakes we need to study the impacts of past earthquakes. You met Nic Donnelly at Land Information New Zealand (LINZ). Nic is a surveyor and after large earthquakes he must go out into the field and measure land movement. It is important to know how far the land has moved during an earthquake. Major land movement will damage water and sewer pipes as well as buildings. GPS technology has made Nic’s work far easier and more accurate. It was amazing looking at photos from the Kaikoura earthquakes. You could see where the land had moved more than four metres sideways and two metres upwards. You can learn more by watching the video. 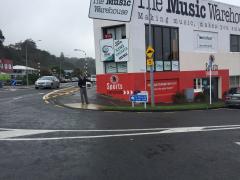 Rob points out where land drops along the Wellington Fault. Image: LEARNZ. 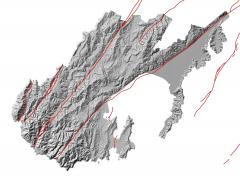 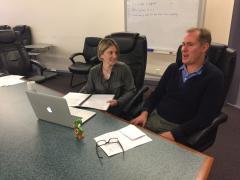 Shelley and Rob talk to students from Kaikoura Primary School during the web conference. Image: LEARNZ. 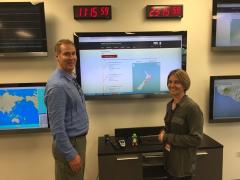 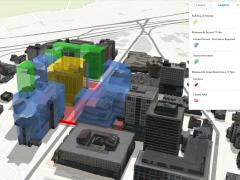 3D maps help share information with the public and show which areas need to be evacuated. Image: WCC. 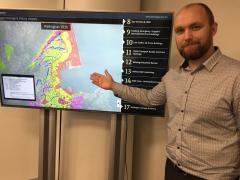 Alex shows you how GIS (Geographic Information Systems) are used to respond to earthquakes. Image: LEARNZ. 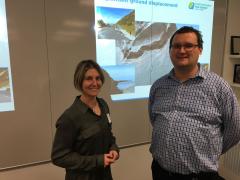 Nic Donnelly from LINZ talks to Shelley about how he measures land movement after earthquakes. Image: LEARNZ. 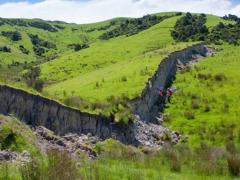 This photo shows how land moved during the Kaikoura magnitude 7.8 earthquake. How is this movement measured? Image: LINZ