Reminder: Follow me on Twitter this week for field trip highlights as they happen. Do this by following @andrewpenny01 #memorialpark2 .

A chilly southerly and darkening skies greeted you this morning as you made your way up to the Memorial Park and underpass construction site. It had rained throughout most of the night so I was hoping for a rain break long enough for today’s activities. The ambassadors at least had all their fingers crossed!

A building of significance

Your first stop today was at the historic Home of Compassion Crèche. This is an historic building and work is underway to relocate it so that it becomes part of the Memorial Park. On site you met up with historian Matthew Tonks who spoke to you about why this building is so significant.

There are several reasons actually – here are some of them. It is architecturally significant, as well as a physical reminder of the nun Mother Suzanne Aubert and her pioneering social work. It was also the first building to be built in New Zealand specifically for child care. This in turn shows a time in New Zealand where society’s attitudes to working mothers were becoming more accepting, as well as laying the groundwork for other childcare centres.

The building doesn’t have to be moved far, so you might think that with a couple of cranes it would be a relatively easy job. Not so! There is not enough room to get the cranes close enough to the building so engineers have had to come up with a different solution. Firstly though, the Crèche has had to be strengthened for the move. Site engineer Htut Win took you inside the building to show you just how this has been done. As well as being strengthened, several heritage items like the veranda and internal matai flooring have been removed and stored for putting back later.

The actual move will be done in three phases using hydraulic pullers and lifters. Htut took you back outside to show you one of these hydraulic pullers and the platform which has been built to slide the building along. It is fascinating to see this creative engineering in action. Be sure to check out the video for Htut’s full explanation of the move and a special graphic showing how it will be done.

After the final move to its permanent location, the Memorial Park Alliance will restore the Crèche’s exterior. The Crèche will be strengthened to earthquake standard, including isolating the base from the rest of the structure (this is called base isolation).

Next you met with geotechnical graduate Michelle Knapstein. Michelle is involved with drainage around the underpass. This is another very important part of the project, especially since part of the tunnel sits below the water table. You had a look at the outside of part of the tunnel wall that workers are currently filling with gravel. Most of the stormwater that flows towards the tunnel will drain through this gravel, where it then connects up with a stormwater drain covering the length of the tunnel. You also had a close-up look at the water proof coating applied to the outside wall which ensure the underpass remains watertight.

Back at the Memorial Park Information Centre you continued the discussion about drainage. You met civil engineer Katherine Heays who showed you how a computer programme helps the construction team know exactly where the water will drain to and collect, and therefore where all the stormwater systems need to be positioned.

This technology is known as GIS (geographic information systems). And it sure is clever! You can watch the video and see some of the graphics that GIS has created for the drainage part of the underpass project – very cool indeed.

The last part of the day was spent talking with St Claudine Thevenet and Brightwater School on the audioconferences. Once again these discussions were very informative. It always amazes me just how much new information comes out of the audioconferences, especially when we are discussing parts of such a massive project.

See you tomorrow for the final day three of the field trip! 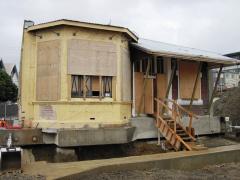 The Home of Compassion Crèche is nearly ready to be moved. What can you see that has been done to strengthen the Crèche before the move? Image: LEARNZ. 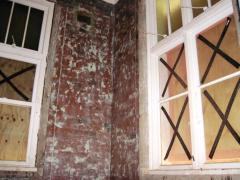 Inside the Crèche you can see a fibreglass sheet that has been put over all the brick work to keep it together during the move. Why is there tape in the shape of a cross on the window panes? Image: LEARNZ. 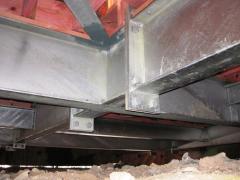 Underneath the Crèche you can see all the steel reinforcing. Image: LEARNZ. 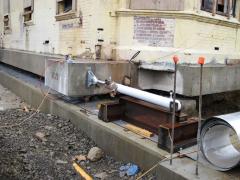 A hydraulic pully system will be used to drag the Crèche into position where it will then be lifted onto its new site. What is the sheet of stainless steel there for? Image: LEARNZ. 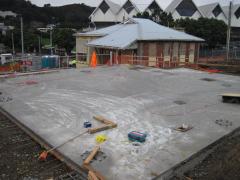 Here you can see the new site for the Crèche. What do you suppose the round parts on the concrete with the bolts sticking out are for? Image: LEARNZ. 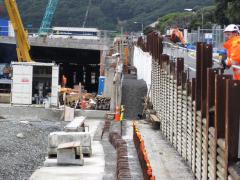 Here you can see the old retaining wall on the right used when the trench was being dug. It was going to be removed when the new tunnel wall was put in place. What is it now being used for? Image: LEARNZ. 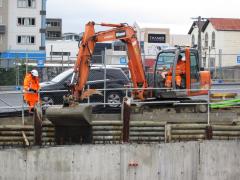 A digger puts more gravel behind the tunnel wall as part of the drainage system. What will this gravel do? Image: LEARNZ. 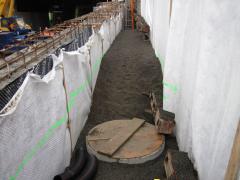 A closer look at the gravel in between the old retaining wall and the new tunnel wall. What do you think the round piece of wood is covering? Image: LEARNZ. 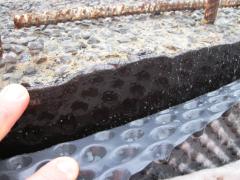 A closer look at at the material put onto the outside of the tunnel walls. How does this help the walls? Image: LEARNZ. 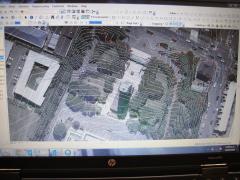 One of the graphics that GIS is able to create. What do you think the lines on this image show? Image: LEARNZ.