Today was the day that you have all been waiting for, the day when you would finally see Pukeahu National War Memorial Park ahead of its official opening. Emma Beech a geotechnical engineer who you met during the first Memorial Park field trip had promised to give you the grand tour of the park.

You had to wear all your high-vis safety gear because much of the park is still a construction site. Lots of safety fences were being taken down in preparation for tomorrow’s dawn ceremony to bless the park. The whole park was a buzz of activity as last minute tasks were being completed. Luckily, the sun was shining and you were given special permission to wander around and explore the park.

I was surprised how green the park looked. Large trees and lush grass gave the impression that the park had been there for a long time. All these plantings have been carefully chosen and planted to ensure they match the different cultural elements of the park and will still look good in years to come. 165 trees in total have been planted and this includes six different species. 32 pōhutakawa trees, five Northern rātā trees, 25 kōwhai trees, 75 olive trees and 10 tītoki trees have been planted, along with 18 eucalyptus trees for the Australian Memorial. Tree pits were carefully built before the paving was finished so these trees have enough space to grow without their roots damaging the paving. You can see these and other parts of the park being developed during the last Memorial Park field trip.

Symbols of peace and remembrance

When the designers of the park were deciding what to plant they had to think about what would grow well in Wellington and what they would symbolise. Both native and exotic species have been chosen because the exotic trees will reflect other countries. Over time, memorials from other counties will be introduced into the park. Red roses have been planted because red is the colour of rememberance and these roses will flower in time for Anzac day. Olives and poppies have also been planted as a symbol of peace and remembrance. As you walked around the park and listened to Emma explain different aspects you were able to appreciate just how much time and effort has been put into every detail. The Park design was chosen after the Ministry of Culture and Heritage ran a competition to design a memorial park nearly ten years ago. I’m sure the designers are feeling very excited to finally have the park completed. You can find out more about the design of the park in the videos.

You met Paul Flannery the site manager for the Australian War Memorial beside the towering columns of sandstone that make up this monument. Paul explained that he works for the Australian government. This memorial is being built to honour the Anzacs and in return for a sister monument that the New Zealand government has built in Australia. The red sandstone symbolises the rock of Australia. Aboriginal and Māori designs have been carved into granite incuts in the rock. Gum trees have been planted alongside the monument and the huge columns are an impressive sight that stands out as you enter the park. You can see this in the videos. Tomorrow you will see the Tangata Whenua Gardens unveiled at the dawn ceremony.

Before the audioconferences you had time to take a look at the restored Home of Compassion Crèche. This building has huge historic significance as Suzanne Aubert ran a crèche here in the early 1900s for the poor and so single mothers could go to work. It was amazing to see how well the crèche had been restored after it was moved from its old site so that it could be a part of the Park. You may rememeber this building from the second Memorial Park field trip with its broken windows and peeling paint. Now the crèche has been restored to its former glory showing that heritage can be preserved while development continues. You can watch the video about this.

You spoke to Clifton Terrace School and Brightwater School during the audioconferences and found out more about the development of the Memorial Park project. You heard from Lynsey Morgan about how quickly the project has progressed since the first Memorial Park field trip and that the whole project has cost 120 million dollars. You can listen to the audioconferences to learn more.

Tomorrow you will be attending a very special dawn ceremony at 4.30am so make sure you have an early night. 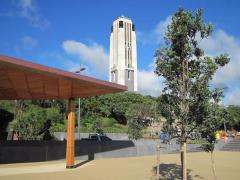 One of two pavilions to welcome visitors into Memorial Park. Why do you think the pavillions have been designed like this? Image: LEARNZ. 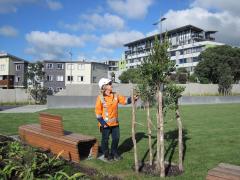 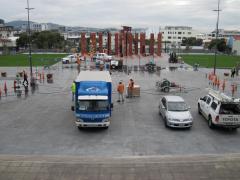 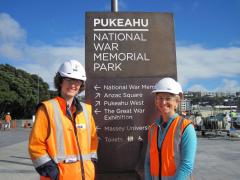 Emma takes Shelley on a tour of the Park. What do you think this paved area will be used for? Image: LEARNZ. 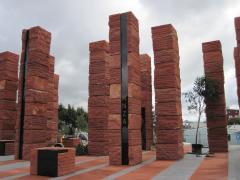 Large sandstone columns form the Australian War Memorial in the Park. Why do you think there is an Australian Memorial here? Image: LEARNZ. 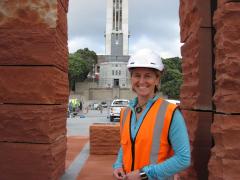 Shelley takes a look at the carvings on the sandstone columns in the Australian War Memorial. Image: LEARNZ. 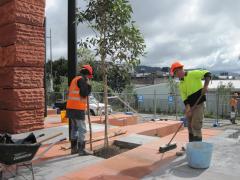 Eucalyptus trees are planted as part of the Australian War Memorial. Image: LEARNZ. 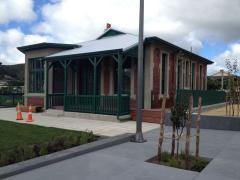 The Home of Compassion Creche has been moved and restored so that it can be part of the Park. What is the historic value of this building? Image: LEARNZ. 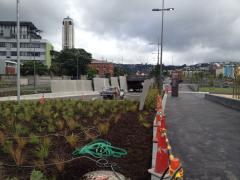 New gardens have been created at the entrance to the Arras Tunnel. Image: LEARNZ.