You may have found it difficult to wake up in time for the dawn ceremony this morning but the effort was well worth it. You arrived outside Pukeahu National War Memorial Park at 4.30am where you were called on to the Park to take part in the blessing ceremony. Before the public can use the Park the area needs to be blessed to remove tapu. This ceremony must be completed before the first light of day.

Over three hundred people gathered for the ceremony where each part of the park was blessed as the call of kaikaranga and karakia echoed through the darkness. The Tangata Whenua Gardens were unveiled including a statue and rock carvings. Speeches from kaumatua of local iwi and waiata followed the blessing before the sky began to lighten and everyone was invited to a breakfast at Mount Cook School which is located beside the Park.

Breakfast was well received as most people were really hungry after getting up so early in the morning. Morrie Love who has been in charge of work on the Tangata Whenua Gardens spoke. The Minister for Arts, Culture and Heritage, Maggie Barry and Celia Wade-Brown, the Mayor of Wellington also spoke. You managed to catch up with Minister Barry before she left for parliament. She explained why this Park is so significant for all New Zealanders to remember those who have served at war and given up so much so that our country could be what it is today. You can find out more in the videos.

Following breakfast Morrie took you back out into the Park. The Park is now known as Pukeahu National War Memorial Park after the Māori name for the area. Pukeahu means sacred hill because sacred ceremonies were held here when Māori lived in the area before the Pakeha arrived. Pukeahu was the name for what eventually became Mt Cook hill in Wellington. So it is a special place for the Maori iwi who live in Wellington, it is part of their history and mana.

Morrie explained that the Tangata Whenua gardens represent Māori who went to war for their country and those who stayed behind to care for the children and look after the homes and businesses. In the gardens, three huge rocks represent significant maunga in Māori history and have been brought to the park from the mountains of Ruapehu, Tongariro and Taranaki. They have been carved with symbols representing iwi and these mountains.

You had a closer look at the bronze statue which was unveiled earlier this morning. This statue is called Hinerangi. It is a woman with a beautiful cloak looking up with sadness at the National War Memorial. She represents the people who stayed behind during times of war, their grief at losing loved ones and their hope for peace in the future. The carver of the rocks is Darcy Nicholas who is a famous Māori carver selected for the quality of his work. He comes from Taranaki and lives in Lower Hutt, so he has links with the iwi who came from that mountain region to settle the Wellington area in the early 1800s. Darcy was helped in his design for the statue by weaver Veranoa Hetet. Her detailed knowledge of woven cloaks gave Darcy the inspiration for the cloak he carved on Hinerangi. This statue is faceless which gives it a haunting feeling, while the bronze cloak shines when the light hits it.

Some students from Clifton Terrace Model School attended the dawn ceremony with Mount Cook School students. These students told you about the work they have been doing on Pukeahu National War Memorial and how much it means to them. Some students talked about coming back to the Park for the Anzac day service so they could remember the wars that New Zealanders have served in and celebrate the peaceful life we have now. You can find out more in the video.

After talking to Hinds School and Harewood School during the audioconferences you met with students from Wellington College. These students have been completing art portfolios based on war. They explained how their artwork has given them a greater appreciation for how much people sacrificed in times of war. Their work is incredible. You can see this for yourself in the video.

Tomorrow you will visit the Dominion Museum to find out more about the Great War Exhibition and see how the Carillon and Hall of Memories have been strengthened. 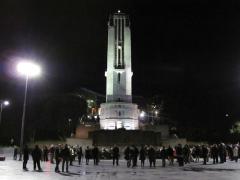 People gather to hear the speeches during the dawn ceremony to bless Pukeahu National War Memorial Park. Why did the park need to be blessed? Image: LEARNZ. 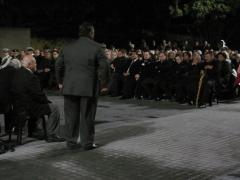 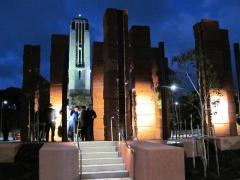 The dawn ceremony was completed before the first light of day which you can see here above the Australian War Memorial and Carillon. Why do you think this ceremony needs to be done so early in the morning? Image: LEARNZ. 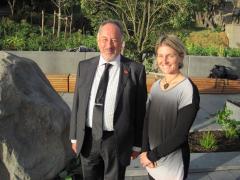 Morrie Love explains to Shelley the significance of the Tangata Whenua Gardens. What does this large rock represent? Image: LEARNZ. 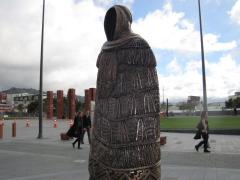 The bronze statue of Hinerangi represents those who were left behind in times of war. Why do you think this statue is faceless? Image: LEARNZ. 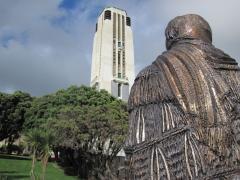 The statue of Hinerangi looks up towards the Carillon. Image: LEARNZ. 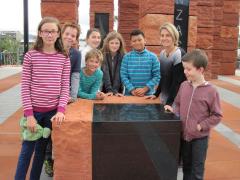 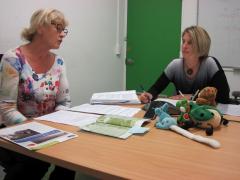 Lynsey Morgan from the Memorial Park Alliance and Shelley talk to students from Hinds and Harewood School during today's audioconferences. Image: LEARNZ. 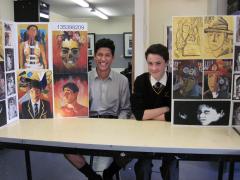 Efrain and Jozef from Wellington College share some of their art work. Image: LEARNZ. 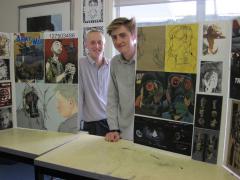 Harry and Zac show some of their art work based on commemorating war. Image: LEARNZ.