Antarctica is the coldest, driest, windiest and highest continent on Earth. It is about fifty times the size of New Zealand and is almost completely covered in ice.

Of the seven continents, Antarctica is:

The Antarctic continent including all the islands and ice shelves covers approximately 13,661,000 km2 in area. This is about fifty times the area of New Zealand.

Antarctica is almost entirely covered by ice, with exposed rock only making up about 0.4% of the continent. The ice sheet has an average thickness of about 2450m, reaching 4776m at its maximum.

Antarctica is of great interest to scientists: Why do you think so much scientific work is done in Antarctica?

Why is Antarctica so cold?

The Russian base at Vostok, which is 3488m above sea level, is the coldest place on Earth with a mean annual temperature of around –55°C. The coldest recorded temperature at Vostok was –91°C in 1997. The average temperature at New Zealand’s Scott Base is -20°C. Antarctica is cold because:

Why is Antarctica so windy?

The strong winds are the result of katabatic winds (from the Greek word katabasis, meaning - going down) which arise when cold, dense air lying less than a few hundred metres off the surface at the highest levels of the Antarctic ice sheets flows down towards the coast under gravity. Near the coast these winds can reach tremendous speeds.

How cold, wet and windy is it where you live? Compare this with Antarctica. 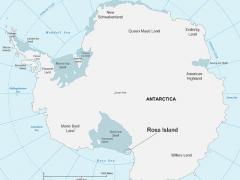 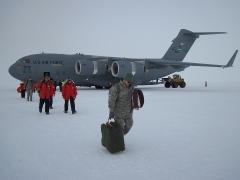 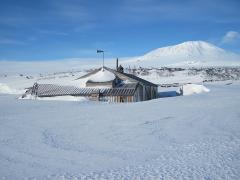 Antarctica is almost completely covered in ice and is the coldest place on Earth. This is Scott's Hut at Cape Evans. What is Captain Scott famous for? Image: LEARNZ. 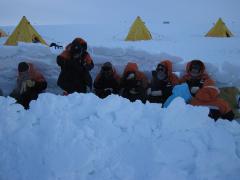 To work safely in Antarctica everyone must complete Antarctic Field Training. Why do you think it would be important to know how to set up a camp in Antarctica? Image: LEARNZ.

“Great God! This is an awful place!” The words of the explorer, Captain Scott, when he and his men finally reached the South Pole on 17th January 1912. Find out more about Captain Scott’s expedition and the science that his team carried out while in Antarctica.