Climate in Antarctica is of interest to scientists because increases in temperature will impact on wildlife and cause sea level rise as ice melts.

Apart from some parts of the Arctic Circle, the West Antarctic Peninsula is one of the fastest warming areas on Earth. The tricky thing to understand is how climate is changing. Because Antarctica is a big place, climate change is not happening at the same rate across the continent. In some places sea ice is increasing while in others, sea ice is decreasing.

You could find out about the Antarctic Cirucumpolar Current and the Gulf Stream and their affect on climate.

East and West Antarctica are separated by the great Trans-Antarctic Mountains.

The East Antarctic Ice Sheet reaches a height of more than 4,000 metres at its highest and holds the water equivalent of 60 metres of global sea level. Like all ice sheets, the total mass of frozen water that makes up EAIS is the result of a balance between the growth of ice due to snowfall, and the loss of ice due to melting at the edges and the calving of icebergs.

Changes in the "mass balance" of ice are of great concern to scientists because of their impact on sea level. If an ice sheet is growing, it tends to lower sea level due to the extra storage of frozen water; if it is shrinking, it tends to raise sea level. Recent estimates of the changes in the EAIS suggest that it is approximately in balance.

The West Antarctic Ice Sheet makes up about 20 percent of Antarctica's surface area and stores the frozen water equivalent of six meters of global sea level. Despite being only one-tenth the size of EAIS, WAIS is the ice sheet that has scientists worried:

The third region, the Antarctic Peninsula, is a California-sized finger of West Antarctica that extends northward into the Southern Ocean.

The Peninsula is about 4 percent of Antarctica and has a milder climate that is strongly influenced by the ocean that surrounds it on three sides. The northern half of the Peninsula often reaches melting point during the summer months. The landscape is mostly glaciated and mountainous.

The volume of ice on the Antarctic Peninsula is small compared to that of the West and East Antarctic ice sheets. However, due to strong warming, glaciers are retreating and contributing to sea level rise.

The greatest changes in temperature have been recorded on the Antarctic Peninsula. Temperatures here have increased by up to 3° C since 1950.

Antarctic wildlife will also be affected by climate change. Krill often feed on algae that live underneath sea ice and krill populations have been declining around the West Antarctic Peninsula as sea ice has decreased. 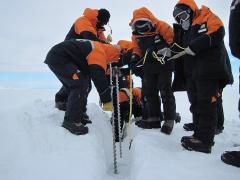 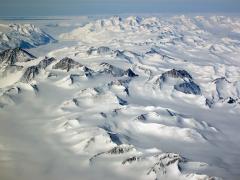 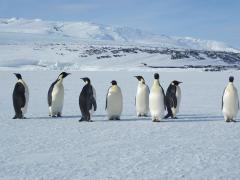 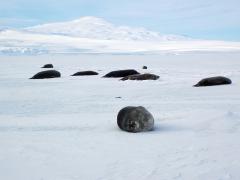