Living under the sea ice

Organisms that live under sea ice around the coast of Antarctica must be able to survive long periods without light due to the presence of sea ice.

Antarctica is a land of ice. The seas around the coast of the continent are cold, as low as -1.9 degrees C, and often covered with a thick layer of ice, yet this icy marine ecosystem supports a wide range of living organisms as the cold waters are rich in nutrients.

The presence of ice on the surface of the sea drastically reduces the amount of light that can pass through to the water below.

Under permanent ice shelves where the ice is several hundred metres thick there is no light at all and so very few marine organisms live there.

Below seasonal sea ice, which is much thinner (usually just a few metres), some light can pass through and so large marine communities can live on the sea floor. The area and thickness of sea ice depends on the season and location. In some locations sea ice forms and melts every year. This ice is usually around 2-3m thick. In other areas the sea ice may stay for several years at 6-7m thick.

Most of the light from the Sun that hits a layer of sea ice is reflected. Layers of snow may also build up on the sea ice further reducing the amount of light that can pass through. Less than 1% of the light above the ice makes it through and an even smaller percentage will reach the sea floor 20m below.

If multi-year sea ice is present then the times when some algae can photosynthesise may be only for short periods every few years.

Organisms that feed on the algae will need to be adapted to a limited food source or switch to feed on other sources. 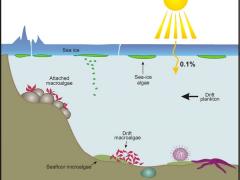 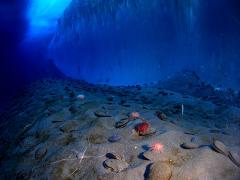 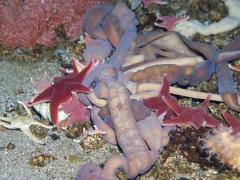 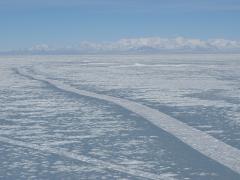 Imagine you are a scientist studying an animal that lives beneath sea ice in Antarctica. What data would you collect and why? What challenges would you face while working in this environment?