Antarctica is a place that captures your imagination, this huge southern continent was the last great land to be discovered by people and no one lives here permanently. Great expanses of white wilderness are home to many unique plants and animals and attract scientists and adventurers from all over the world. Coming to Antarctica is a dream come true and I can’t wait to share the journey with you.

Before venturing down to Antarctica you had to meet with Antarctica New Zealand in Christchurch to get fitted out in all your ECW (Extreme Cold Weather) clothing. Four jackets and two thermal layers, plus over-trousers should keep you cosy warm down on the ice! You may have been happy to hear that the plane was delayed so that you could have some extra time to become familiar with all your gear, or you may have been like me and just super keen to get underway. There have been some very intense storms in Antarctica recently and some people have been waiting a whole week for weather fine enough to allow the C17s to fly.

Travelling with the US Air Force

Finally after a two day delay our flight was confirmed. You had to check in early so that all your gear could be weighed. An eager bunch of over one hundred people lined up to go through security. Most of these people were Americans. McMurdo Station is the American base in Antarctica and is only two kilometres from New Zealand’s Scott Base on Ross Island. McMurdo is like a small town and can have up to 3,000 people staying there, while Scott Base can only house 86 people. The C17 Globemaster aircraft destined for Antarctica is run by the United States Air Force and it certainly stood out. These planes are huge! As soon as you climbed the steps to enter the aircraft you could see that this was not your average airliner. There are only two windows at the front and back of the plane and half the aircraft was filled with freight. Luckily you were given a bag of scrummy food for lunch because there would be no inflight service on a plane like this.

As we taxied down the runway you had to put on earmuffs and secure your seat belt ready for the five and half hour flight. Because you had to wear all your ECW clothing it was incredibly hot on the plane. It was quite funny to see people wandering around in huge jackets and boots but everyone knew the moment we stepped off the plane we would be glad of the warmth. The ambassadors were so excited that they didn’t mind being squashed into a small space.

Later in the flight you had to fasten your seat belt as there were a few bumps so you didn’t get a chance to climb up to the cockpit to visit the pilot. After about three hours you caught your first glimpse of Antarctica. Sea ice gave way to mountains and glaciers. The white landscape stretched out for miles as we flew over Victoria Land and the brightness left you temporarily blind when you turned away from the window to make your way back to your seat.

The flight time flew by and before you had time to become bored an announcement was made that we had begun the descent into McMurdo Sound. Everyone wriggled into their jackets, beanies and gloves, prepared to face the intense Antarctic cold.

Once landed everyone was keen to escape the aircraft to begin their Antarctic adventure. When you left the plane you instantly realised that the cold of Antarctica is nothing like the cold you may have felt back in New Zealand. Because the air is so cold it can’t hold much moisture so is very dry and it is easy to become dehydrated. The wind strips your body of heat so it’s important to wear lots of layers to trap the heat and windproof outers. A bus nicknamed ‘Ivan the Terra Bus’ picked you up to take you to Scott Base. This bus had gigantic wheels to grip the ice and as you drove to the base it was hard to believe that you were actually driving on frozen ocean. The sea ice makes it hard to see where land ends and ocean begins. For the next few days you will be living on Ross Island. This is where many of the first explorers began their South Pole expeditions. Check out the panoramas to see what Ross Island looks like.

After a short bus ride you arrived at base and were given a tour, assigned a bunk room and briefed on safety and rules. The buildings are kept at a balmy 18 degrees so you were able to change out of all your bulky clothing. Scott Base staff and visitors are very friendly so you quickly felt at home. It was an amazing feeling to finally be in Antarctica – a place where few people get to visit.

Your first night in Antarctica may have felt quite strange as the last sunset was in mid-October and it is now light 24 hours a day. Fortunately there are shutters on the windows in the bunkrooms so everyone can still sleep in darkness.

Learning to survive in Antarctica

Life in Antarctica has been busy. During the weekend you had to learn how to survive in the most hostile environment on Earth. You completed your AFT (Antarctic Field Training) and those of you who have not been here before were able to stay out overnight in polar tents to discover how to live in the extreme cold. Weather can change quickly and if you leave base you have to take camping and survival equipment so you can wait out a storm. Most of your travel this week will be on sea ice and there are no roads. Safe routes are marked with green and red flags so you need to have good visibility to follow these. You learnt how to drill through the sea ice to check the depth of cracks to judge whether they are safe to drive across and even managed to be trained up so you could drive the skidoos.

You have passed AFT and learnt how to stay safe while in Antarctica so now you are ready to meet the science team and begin your investigation into marine foodwebs. You will need a good night’s rest because tomorrow you will fly to Cape Bird to help Steve Wing collect samples out at the Adélie penguin colony. 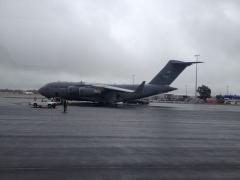 The United States Air Force C17 Globemaster awaits you at Christchurch International Airport. Why do you think an Air Force plane is used to fly to Antarctica? Image: LEARNZ. 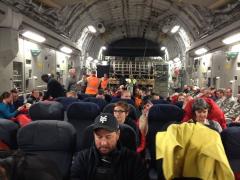 Passengers on board the C17 need to have all their ECW clothing with them ready to land in Antarctica. What differences and similarities do you see between this aircraft and a normal passenger jet? Image: LEARNZ. 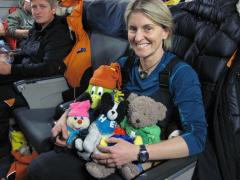 Shelley and the ambassadors settle in for the five and half hour flight to Antarctica. Image: LEARNZ. 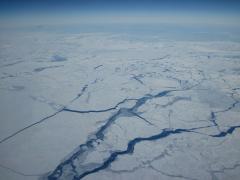 After three hours of flying you begin to see sea ice. Do you know what temperature sea ice begins to freeze? Image: LEARNZ. 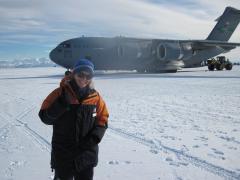 Shelley is super excited to finally be in Antarctica. What are you looking forward to most on this field trip? Image: LEARNZ. 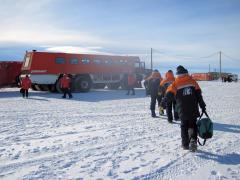 'Ivan the Terra Bus' takes passengers to Scott Base and McMurdo Station. What do you notice about the design of this bus and why do you think it has been built like this? Image: LEARNZ. 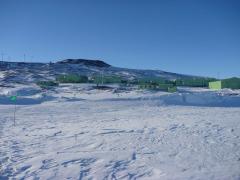 Welcome to Scott Base, the New Zealand Antarctic base on Ross Island. This base was first established in 1957, how do you think it may have changed since then? 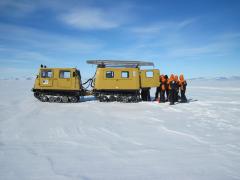 You took part in AFT (Antarctic Field Training) and travelled out on to the sea ice in a hagglund. How thick do you think the sea ice is? Image: LEARNZ. 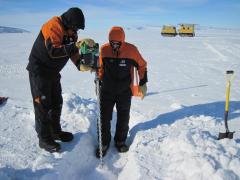 To see if cracks in the sea ice are safe to travel over you have to drill into them to see how wide they are. How do you think you might be able to tell where cracks are after it has snowed? Image: LEARNZ. 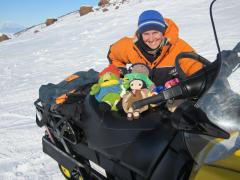 Shelley and the ambassadors complete their skidoo training so they can travel out to where the scientists are working. Image: LEARNZ.