I am Alvin the LEARNZ ambassador. I go on all the trips with Shelley and help look after the other ambassadors from your school.  This is going to be an awesome adventure!

I look forward to you joining us on the ship Tangaroa.

I was a bit grumpy this morning as I had to get up at 5am to catch the flight north to Wellington. At least I had lots of company with six other ambassadors joining us for the journey.

We arrived in Wellington just as it was becoming light and headed straight for the port to board the mighty RV Tangaroa. It was so exciting seeing the boat for the first time.

We learnt our way around the ship and what to do if there is a ‘man overboard’ – hopefully that won’t happen but at least I know what to do now!

Well, we’re off on our big journey out to deep ocean so I’ll see you tomorrow.

I turned even greener than usual today. I thought that I was handling being at sea really well until I got out of bed and realised I wasn’t feeling too well at all. Hopefully I will get used to it otherwise it is going to be a long journey.

It was cool looking around the Bridge though. It is a great view from up there and we saw plenty of albatross throughout the day.

Well, I am off to see if I can keep dinner down – wish me luck!

I am disappointed that I am one of the only ones still feeling seasick, everyone else seems to have adapted.  It made me feel a little homesick or should I say land sick?

The scientists were all hard at work trying to get the CTD ready to do its first test run. The instrument has been redeveloped so it needed to be tested. It was exciting seeing it being winched into the water but unfortunately all the sampling bottles came back empty because the lids had not closed. I guess that’s why they say science is a matter of trial and error.

It is so nice to have finally arrived at our destination, especially now that I am over my seasickness. We have pretty much stopped moving and the sea is much calmer too, so the boat is not moving around nearly as much.

This morning the scientists were up early to send the CTD down to a depth of over 5,000m. Looking at a map it is easy to see why we have come to this area of ocean. This area is deep but doesn’t have many obstacles on the sea floor or strong currents to deal with so it is perfect for deploying Argo floats.

Right, I’m off to see the Deep Argo Float being launched.

It was another exciting day on board the Tangaroa with the second Deep Argo float being deployed. It was touch and go for a while because the Argo wasn’t talking – it wasn’t transmitting signals so couldn’t be put in the water. After such a lot of work developing these prototypes it would have been a real shame to have to take the Argo back home rather than putting it in the water. Luckily it decided to work and it was deployed.

Everything went according to plan and it completed its first test dive and sent back data so everyone was very relieved. Over the next 24 to 36 hours it will complete a 4,000m dive and come back to the surface before going all the way to the sea floor.

We’ll find out how it’s going after the weekend.

Because it was our last day on station in this area of deep ocean we had to make the most of it. Another CTD was deployed and data collected. It was really cool to feel how cold the water was that came out of the bottles that had collected water from the sea floor. This water is only 1-2°C.

We started to head back to Auckland this afternoon but it will take us a couple of days. At least we will deploy more Argo Floats on the way.

I can’t believe it is our last day on board the Tangaroa. We have had such a fun time and travelled over 1,000 nautical miles. We successfully deployed the last of the Argo Floats today and completed a little experiment of our own.  We put polystyrene cubes on the CTD to see what would happen to them in deep water. The cubes came back up half the size that they were before. Shelley suggested that I might like to journey down there too but I don’t want to be turned into a mini Alvin.

Well, it has been a great adventure and I will miss all the other ambassadors. Hopefully I will see them on another trip soon. 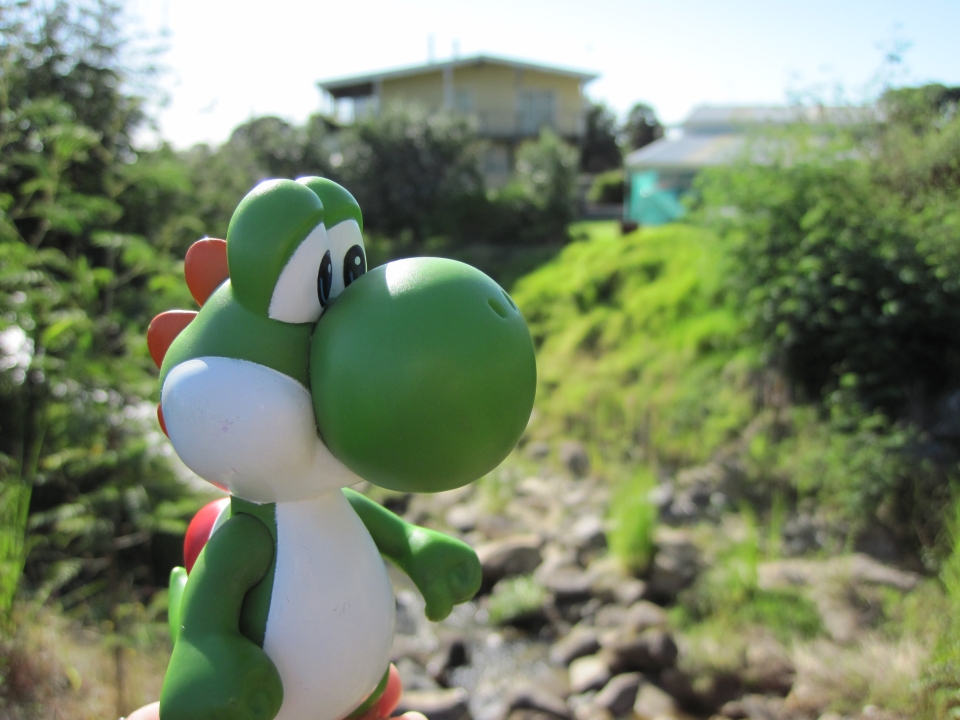 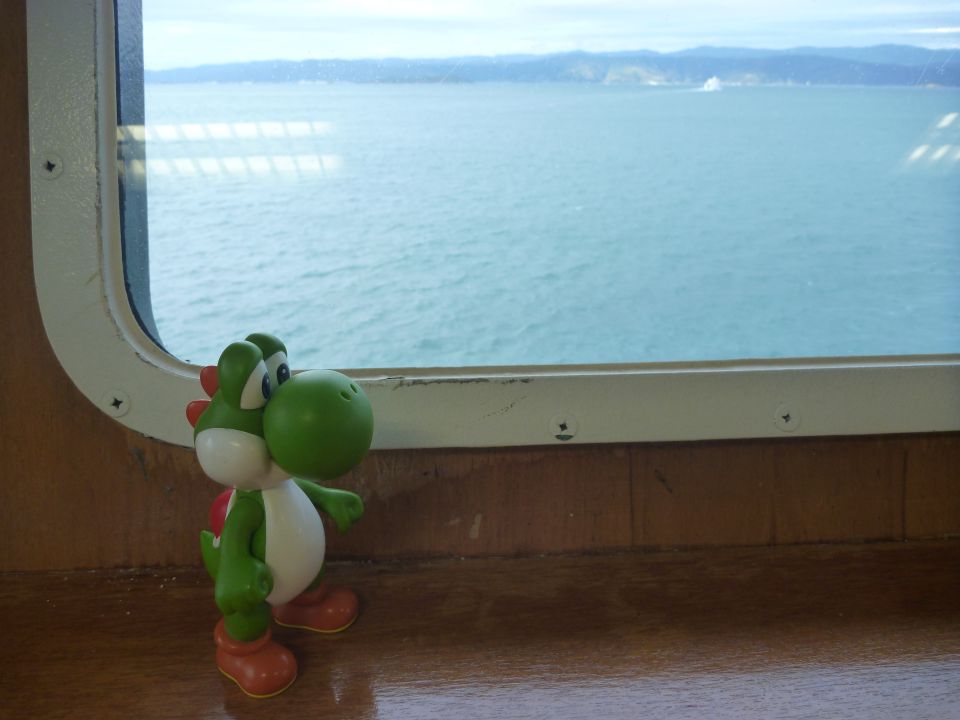 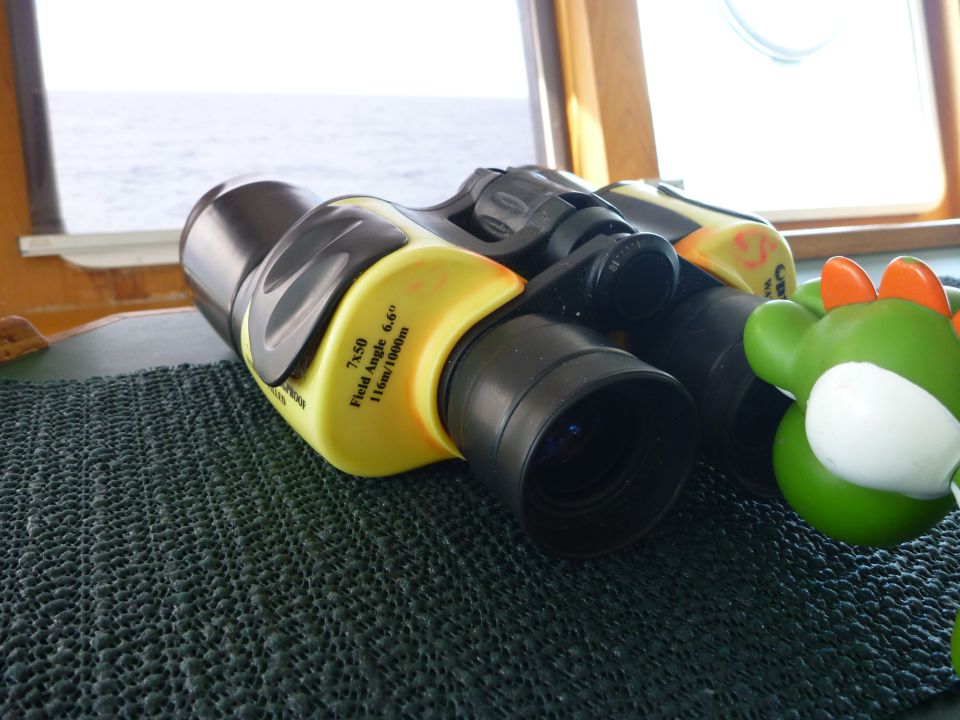 Alvin takes a look through the binoculars on the Bridge. What do you think he might see? 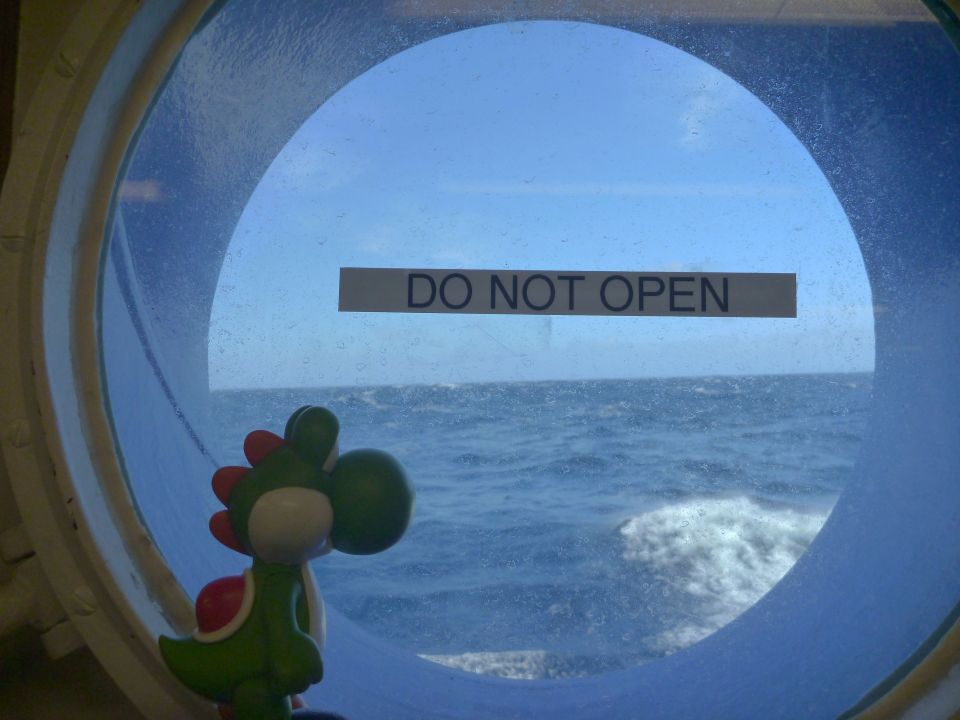 Alvin tries to cure his seasickness by looking out one of the port holes to find the horizon. 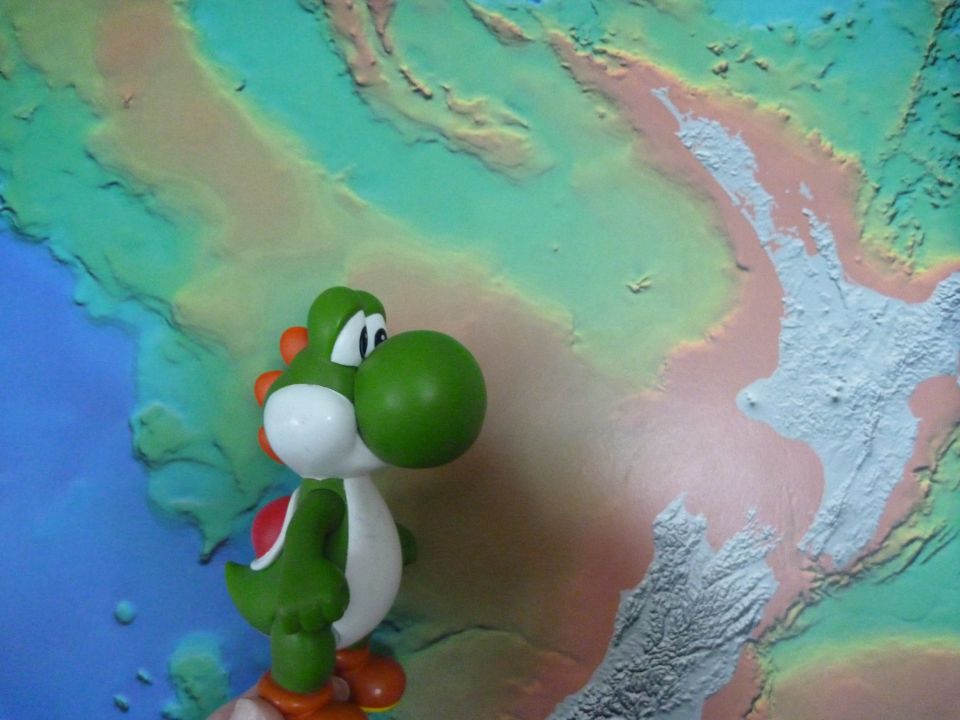 Alvin inspects an undersea New Zealand map to find out where he is. 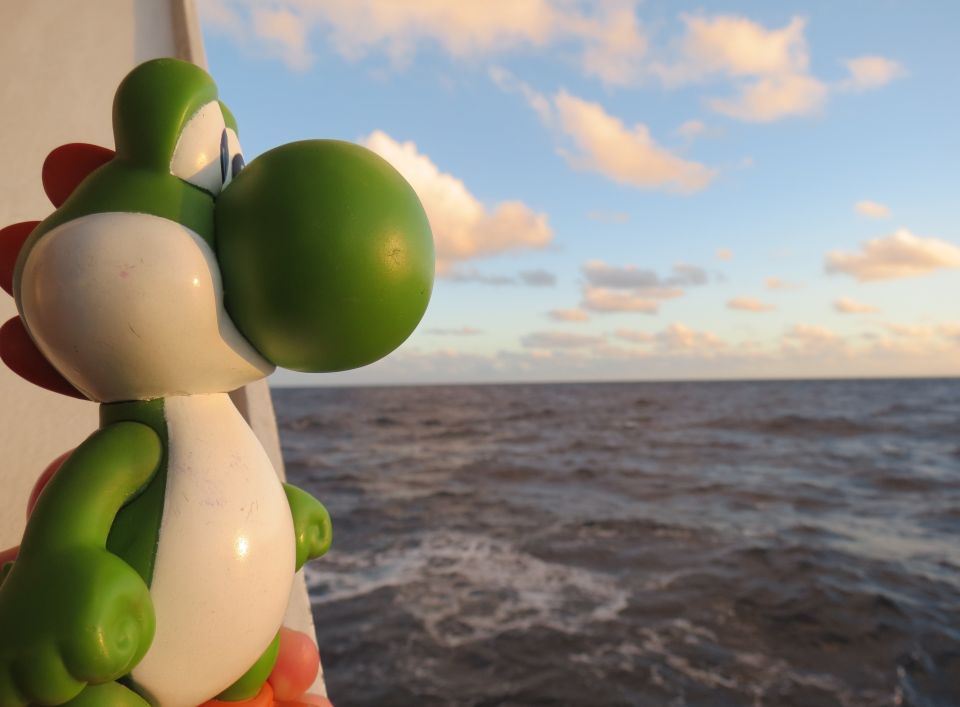 Alvin enjoys watching the sunset from the RV Tangaroa. 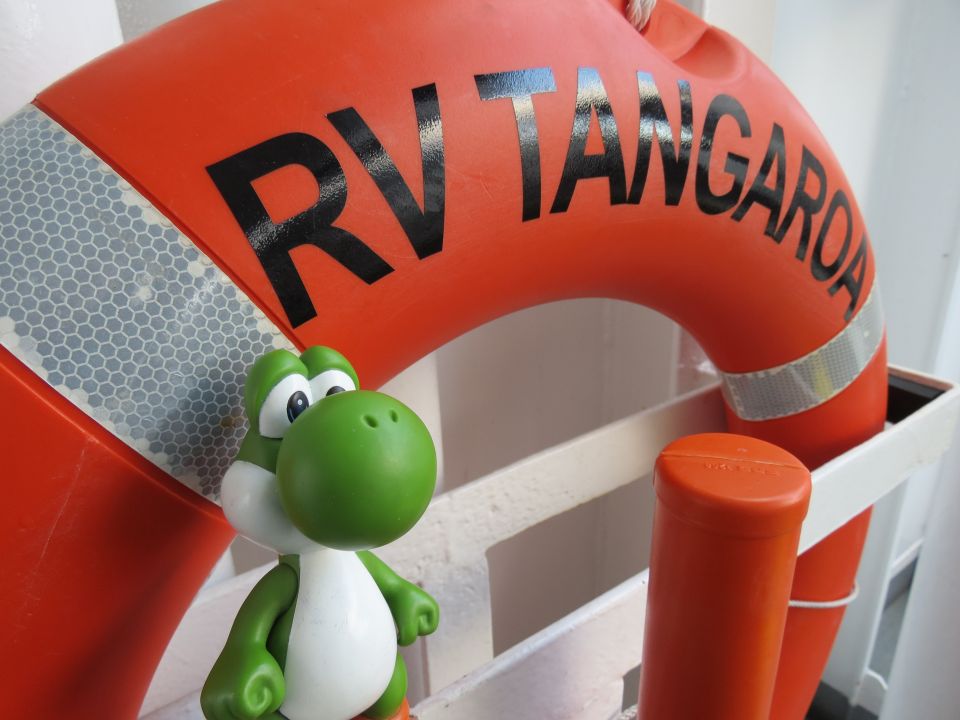 Alvin inspects the life ring on board the Tangaroa. When might this be used? 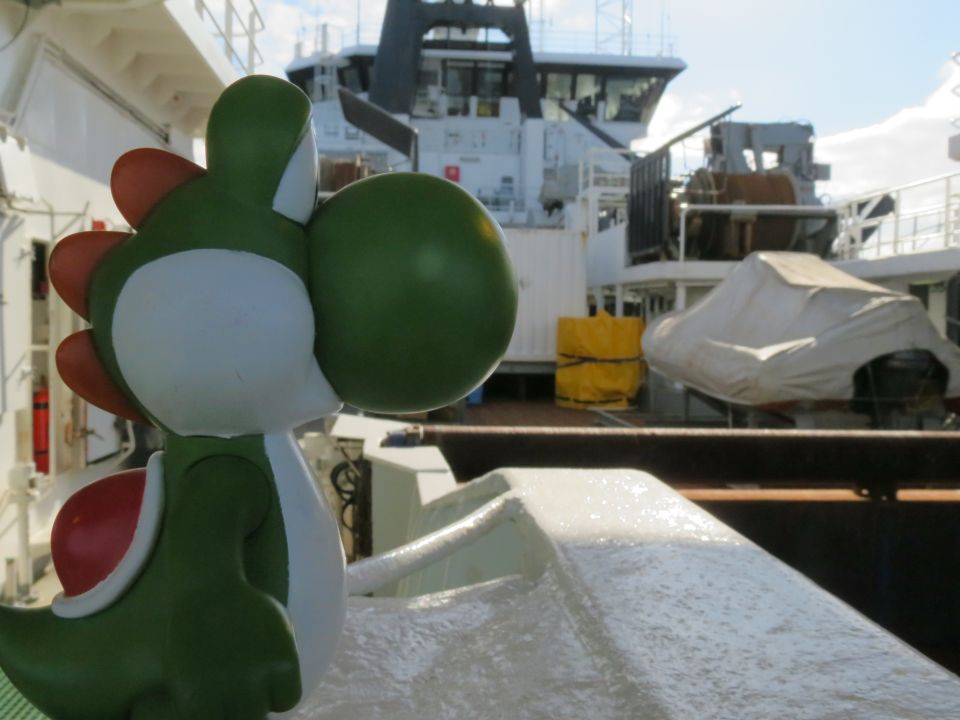 Alvin looks up towards the Bridge from the stern of the RV Tangaroa.