Properties of the sea: salinity and temperature

Cold water is heavier than warm water and sinks below warm water.

Salinity is a measure of how much salt there is in water. Ocean water has a salinity of about 3.5% salt. One litre of seawater contains 35 grams of salt - that is approximately 6 teaspoons.

Salt water has more stuff in it than fresh water. That stuff would be the salt, which makes the mass of water greater, without adding much to its volume.

Seawater is more dense than fresh water so it sinks beneath freshwater. This means that when rivers flow out into the sea the river freshwater floats on top of the sea water. However when the wind blows and the sea becomes rough, the two waters get all mixed up.

What happens when seawater freezes?

When seawater freezes to form sea ice, salt is squeezed out and moves down into the water.

So, ocean currents are formed because dense water (cold and salty) sinks. 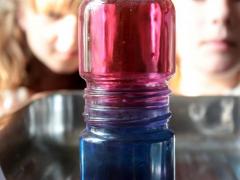 A demonstration that hot water floats on top of colder water. Image source. 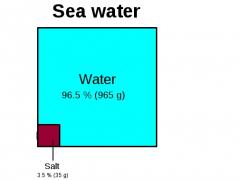 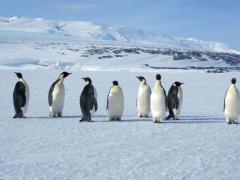 Antarctic sea ice is made up of mostly fresh water. The salt has been squeezed out, and sinks into the sea below. Image LEARNZ

Next step learning: Find out about the special sea conditions in the Fiords of Fiordland where the sea has fresh water on the surface.