Properties of the sea: currents, layers and pressure

The ocean is made up of layers. The deeper layers have very high pressure. You can make an object sink or float by changing its density.

Like a cake the ocean has layers. The layers are often called zones. There are three main zones each called a pelagic zone. Pelagic means ‘the open sea’. The three zones are

The epi-pelagic zone is sometimes called the sunlit zone because it receives enough sunlight for plants to grow. Epi means ‘on’ or ‘nearby’. The epi-pelagic zone goes from the surface down to 200m. The temperature varies greatly from +40°C down to -3°C. Both phytoplankton (plants) and zooplankton that larger organisms like marine mammals and fish feed on, live in this zone.

The meso-pelagic zone is sometimes called the twilight zone because only a very little light gets down to that depth, not enough for plants to grow. Meso means ‘middle’. The meso-pelagic zone goes from 200m to 700m below sea level. The temperature varies from 4-5°C and the pressure is much higher and increases with depth. No phytoplankton (plants) live in this zone.

The bathy-pelagic zone is sometimes called the midnight zone and extends from 700m to the bottom of the ocean. 'Bathy' means deep. No light penetrates this zone. Ninety percent of the ocean is in this zone. Water pressure is very intense and the temperature varies from 0 to 6°C.

Pressure is a force. It is a force that pushes against a surface.

The air around planet Earth is pushed down by gravity to give us air pressure. The air pressure near sea level is 1 bar. That means the air is pushed against our bodies at a pressure of 1 kg per square centimetre. Sometimes 1 bar is called 1 atmosphere.

Every 10m you go down, the pressure increases by 1 bar.

In the deepest ocean the pressure is as high as an elephant balanced on a postage stamp, or the equivalent of one person trying to support 50 jet aeroplanes!

Buoyancy is the ability of something to float. Corks and plastic bottles have buoyancy and stay afloat. Heavier objects like stones have less buoyancy and sink.

Density is how much stuff there is in a certain amount of space. You can measure the density of an object if you know its mass and its volume.

Do you float or sink in water? If you sink – and most people do – then your body is more dense than water. Life jackets are less dense than water so when we wear them they help us float.

I’m thinking … imagine you had an object that floated. If you could make its volume smaller but keep its mass the same, could you make it sink? Read on …

The Cartesian Diver is a demonstration of buoyancy. It shows a small ‘diver’ going up and down because of a change in water pressure.

You can make your own Cartesian Diver:

Wow! Why does this happen?

Well .. at first the diver has enough air in it to make it float near the surface. It is positively buoyant.

An Argo Float is a Cartesian Diver

An Argo Float is able to float and sink because it is like a Cartesian Diver. The density of the Argo Float is changed by reducing the volume of air inside it. 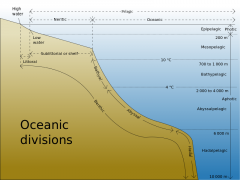 The ocean is made up of different layers. Image source 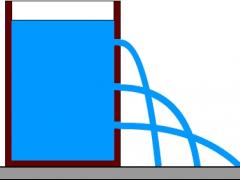 This is a demonstration of water pressure: pressure near the surface is less than the pressure deeper down. Image source

Animated demonstration of a Cartesian Diver. Image source: was waydownsouth on wikispaces. 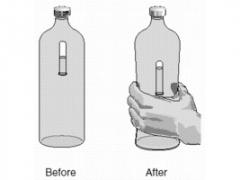 The Cartesian Diver. When the plastic bottle is squeezed, water pressure inside the bottle increases, the air bubble inside the diver gets smaller reducing the volume of the diver. Because Density=Mass/Volume, Mass is the same, volume less = higher density. The diver goes down. Image source

Next step learning: find out how SCUBA divers are able to change their buoyancy