Properties of the sea: food webs and food chains

The open ocean is often called the pelagic zone. The pelagic zone is sometimes thought of as a cylinder or column of water that goes from the surface of the sea to near the bottom. Plants and animals that live in this column are called pelagic animals and pelagic plants.

Food is the energy that makes life possible for all animals. Plants make food by taking energy from the sun. This is called photosynthesis. The word ‘photo’ means ‘light’ and ‘synthesis’ means ‘to make things’.

Plants are sometimes called producers because they produce food with energy from the sun. Pelagic plants always live near the surface of the sea.

Animals cannot make food but have to eat either plants or animals to get their energy. Animals are sometimes called consumers. Most pelagic animals don’t need to live near the ocean surface because they can get their energy from plants and animals at any depth.

A food chain is a model of how energy moves from one organism to another in a community. All food chains start with a plant. In the pelagic zone the most common plant is phytoplankton. The word ‘phyto’ means ‘plant’ and ‘plankton’ means ‘to wander’. Phytoplankton are tiny single celled plants too small to see with the naked eye. However, when they are in high numbers the sea water looks a green colour.

Here is one food web combining the three food chains above: 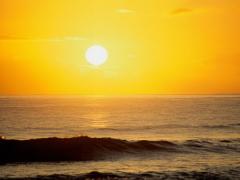 Phytoplankton in the oceans use energy from the sun to make food. This is the start for all marine food chains. Image source 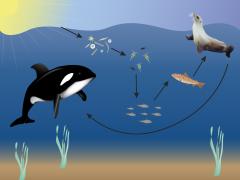 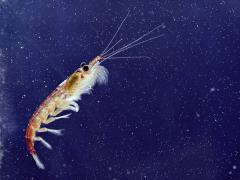 Tiny shrimp krill are an important food source for many marine mammals and fish. Image source