The Argo Float programme started in the year 2000 and involves scientists from 45 countries. The purpose of the programme is to collect data about the oceans and help us learn more about climate and weather.

In the 1990s NOAA (the National Oceanic and Atmospheric Administration) scientists working as part of the World Ocean Circulation Experiment (the WOCE), built neutrally buoyant floats that collected and stored data about ocean temperature and salinity.

In the early 1990s satellites were put into space to measure the surface height of the oceans.  One of the satellites was called Jason.

The name ‘argo’ comes from a story in Greek mythology.

Jason was in his early twenties when he started his search for the Golden Fleece. Jason gathered a team of 50 people and started his voyage on a ship called 'Argo'. Together they were known as the 'Argonauts'.

The name argo from the Greek myth was chosen as the name of the robotic floats to emphasize the strong relationship between data from Jason (the satellite) and data from the Argo Floats.

There are also Argo Floats designed to work in areas where there is sea ice. They are smart enough to know that there is ice on the sea surface and remain underwater until the sea ice has gone. They have enough memory to store up to 68, 10-day profiles which are uploaded once the Argo Float reaches the sea surface (clever eh!)

The Argo Float programme is an example of successful international co-operation. Scientists from 45 different countries and many different organisations including NOAA and NIWA (who are supporting this field trip) have worked together and agreed on how Argo data should be collected, managed and displayed. This programme has changed the way scientists think about working together, and about collecting and sharing data.

The google earth application will put the location of all Argo floats (with their WMO ID numbers) on a Google Earth globe. Once installed it will update itself automatically when you start Google Earth. You can click on any float and get a lot of information about that instrument.

It may take just a little while to come up but you will end up seeing the Google Earth map with lots of green dots all over it - these are the Argo Floats. If you zoom in you can focus on a specific one, you can get a profile of it - its salinity and temperature readings, other information, and even a trajectory of where it has been (looking at currents). Stick with this one Argo Float (ie adopt it). Remember it completes a cycle every 10 days so look out for a new profile. 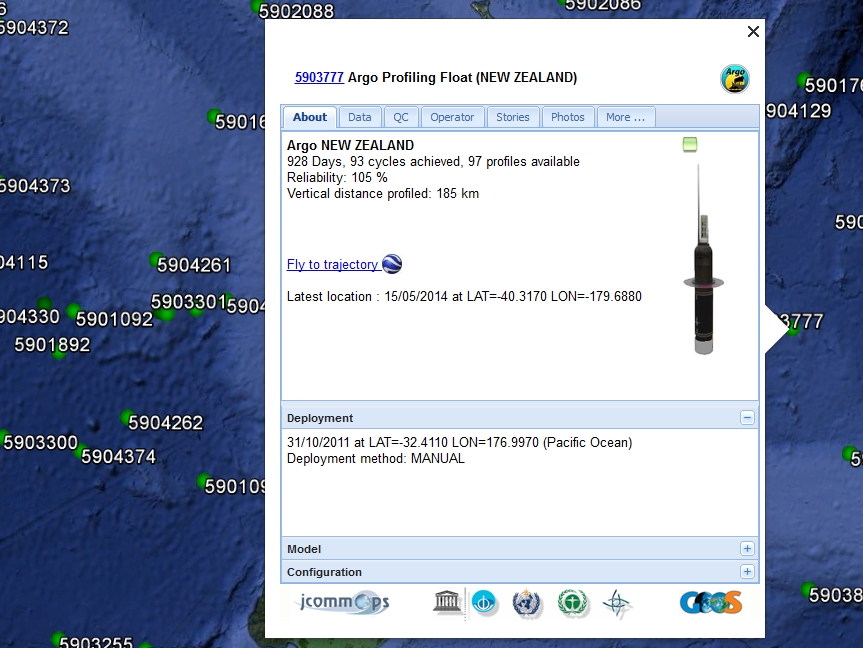 Next step learning:  make a list of the benefits of scientists from different countries working together rather than a team from one country working alone.