I am a physical oceanographer working at CSIRO Marine and Atmospheric Research in Hobart, Tasmania, Australia.

My job involves using observations from instruments like Argo floats and ship-board CTDs (conductivity-temperature-depth) to understand ocean dynamics and change. I use special under-ice polar profiling floats to look at the salinity and temperature of water in the Mertz polynya (a polynya is a region that remains ice free over winter) on the Antarctic continental shelf. From this data I can estimate the amount of sea ice that is produced in this region over winter. I also use high resolution data from ship surveys to look at how the very densest waters close to the sea floor around Antarctica are changing over time. From this data we can see that the densest Antarctic Bottom waters in the Australian sector have reduced by more than 50% over the past forty years.

I started off with a degree in marine biology and oceanography at University. Since then I’ve worked in many different marine science areas including studying the thermal outflow from a power station, calculating tide predictions for stations around Australia and the Pacific Islands, identifying marine phytoplankton, stock assessments of Patagonian toothfish, measure to reduce fish and invertebrate bycatch, using hydroacoustic data to look at krill abundance, understanding circulation and change in the Southern ocean.

I enjoy getting away from the desk and working at sea on research vessels, these voyages can be as short as two weeks or as long as three months. I am able to travel to different places around the world to meet up with colleagues who also work on Argo floats. I feel very lucky that I travel to such unique and special places such as the Antarctic.

Most of my job is desk-based and while I enjoy working with data and writing papers, my least favourite job would have to be the administrative paperwork that comes with any job.

I am working on a strategy to develop an “under-ice” observing system for the Southern Ocean and Antartica. This will outline the science rationale for building an observing system that can monitor the Southern Ocean from the winter sea ice edge to the Antarctic continent; incorporating observations of the open ocean, atmosphere, sea ice, ice sheets and ice shelves. We ran a workshop with the Antarctic community that drew together more than 50 scientists who are experts in their field working with gliders, autonomous underwater vehicles, Argo floats etc. to come up with a plan for an integrated observing system that will collect the data required to answer the key science questions over the next 50 years.

Years ago, we did a fish survey around South Georgia in the Sub Antarctic, where a crew of scientists chartered a Spanish fishing boat to do the survey. We trawled for Patagonian toothfish and collected the juvenile fish that were still in good condition in large tanks on deck with running seawater. We kept them for a few days to make sure they would stay alive before tagging them and releasing them. Fisheries scientists often use tag-and-recapture data to look at how far fish move, how fast they grow and at what age they reproduce. We released the first tagged fish over the side and were not prepared for an albatross to be waiting on the water and to snap it up and eat it! We only had a small number of very precious tagged fish so we devised a fish slippery dip, which consisted of a piece of poly pipe about 20cm in diameter that formed a chute from the side of the ship to the water surface. We poured water down the tunnel and released the next fish. It made it just below the water surface before it too was snapped up by a waiting albatross. We then had two scientist standing either side of the fish tunnel with fire hoses aimed at the end of the chute to keep the birds away and this time we had success - the remaining fish were released safely into the water and the albatross went without a meal!

I was once in Antarctica and we were taking water samples close to large icebergs from a small workboat. We were several nautical miles away from the ship and a belt broke on the work boats engine. We didn’t have a spare onboard and the engineers were scratching their heads for a little while wondering how to rig up a spare. Luckily, I had a roll of gaffa tape in the work kit and the engineers were able to rig up a makeshift belt using the gaffa tape that got us back to the ship in one piece. Always travel with gaffa tape, it can fix everything! Seriously, what I learnt is that you need spares of every critical piece of equipment. Once you’re in a remote place you can’t just drop into the local shop to grab another one. So take two or three of everything you need, hopefully you won’t need it, but it doesn’t hurt to have an extra. This is particularly true when working in harsh and extreme environments when exposure to cold for long periods of time can end in hypothermia or worse.

Outside of work I like to get out into nature and go camping, hiking, diving, rock climbing, sea kayaking and sailing. I also enjoy yoga, photography, art, reading, cooking good food with good company.

Watch the video where Esmee talks about her career as a Physical Oceanographer (55Mb mp4 file). 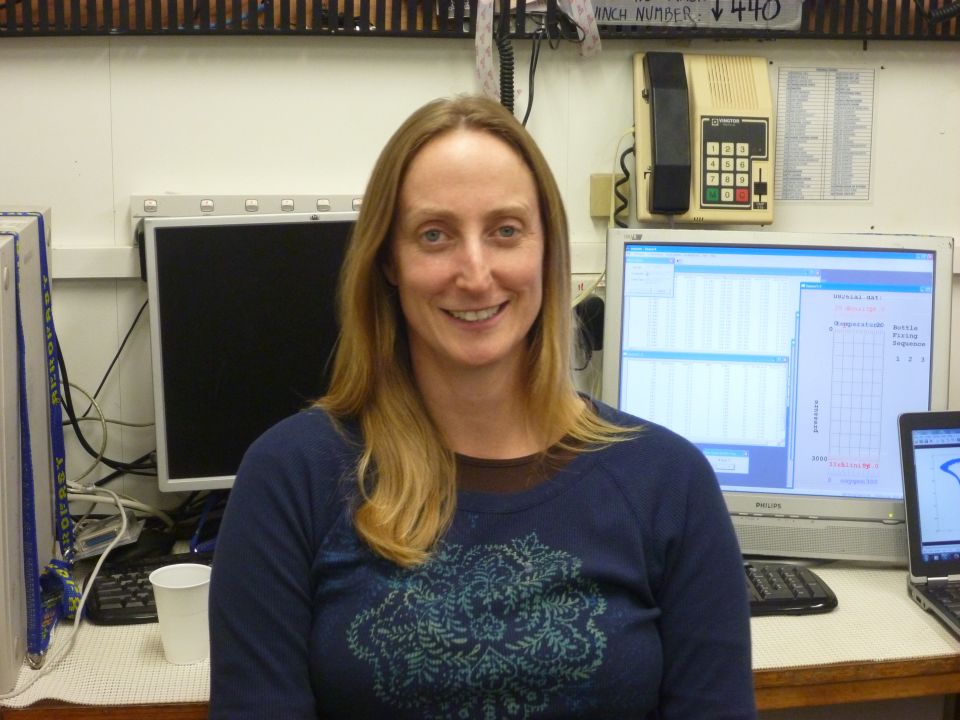