Today we looked at the idea of ‘striking the balance’. You’ve seen this week some examples of the different groups that use freshwater and the different values they place on it. So, how is the use of freshwater balanced with these various users? And what about the wildlife that inhabits it?

We started our day again with the web conference. Our experts this morning were Cam Speedy and Krysia Nowak. There has been some valuable discussion during our web conferences this week. But don’t worry if you missed the live ones. You can still listen and watch the recordings. You can access these on the web conference page.

After the web conference we went with Cam to the start of the Whanganui River. Cam described how The Tongariro Power Scheme gets the freshwater it needs to generate electricity. A series of lakes, canals and tunnels takes water to three power stations before it flows into Lake Taupō. The Whanganui Intake is where water from the Whanganui River is diverted to the Tokaanu Power Station.

Building any structure on a river creates changes in water flow. Genesis Energy has set up systems that reduce the environmental effects of the power scheme. These systems also help the Tongariro River, including the people and animals that use it. One thing they do is make sure there is a continuous minimum flow in the river. They take what water they need to generate electricity. But at the same time, they leave enough water in the river so the plants and animals along living in and around it stays healthy. This system also keeps the anglers, kayakers and rafters happy.

A helping hand for tuna

Cam then took us to Lake Otamangakau. The lake used to be a wetland. This wetland was an important place for the local hapū who gathered mahinga kai here. When a dam was built for the Tongariro Power Scheme, the numbers of tuna (eels) went down. The dam acted as a barrier and migrating tuna could not get back to the lake. To solve the issue, a system was created where the elvers (young tuna) are now collected at certain times of the year and transferred to the lake. The local custom of gathering tuna can now continue. Watch the video to see how the system works.

After lunch, we went to an area along the Tongariro that is being restored with the help of Project Tongariro. We met Kiri from Project Tongariro and some local students who were helping with some planting along the side of the river. I was amazed at the amount of work that has been put into restoring this part of the river. And I could imagine what the area will look like in years to come.

I spoke with the students and they shared with me their thoughts on the benefits of restoration planting. What do you think the benefits are? Watch the video to see what they have to say.

This week you have seen that there are many groups of people, not to mention plants and animals, that value and rely on good quality freshwater. We have learned that by managing the trout fishery and the health of their habitat, other desirable freshwater species will benefit from this work. We have also learned that people need to work together to make the right decisions about the use of freshwater. Freshwater is important: as a habitat for native and some introduced animals, as a resource for generating energy and tourism, and for recreation such as rafting and fishing.

Our freshwater resources need preservation and care. Working together to meet the needs of both people and ecology is all about striking the right balance. By achieving this balance, the future of our wai will be sustainable. 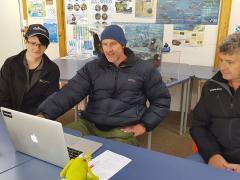 Andrew and the ambassadors with Cam Speedy from Genesis Energy and Krysia Nowak from DOC on this morning's web conference. Image: LEARNZ. 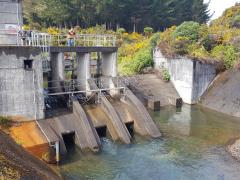 Some water at the Whanganui intake is taken and used at Tokaanu Power Station to generate electricity. The rest carries on down the river. How does Genesis Energy make sure there is enough water flowing down the river? Image: LEARNZ. 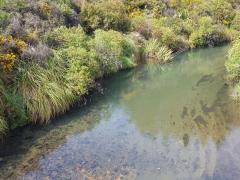 The Whanganui River as seen from Whanganui Intake. How many different uses can you think of for the river? 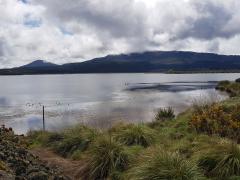 Lake Otamangakau used to be more of a wetland than a lake. How did it become a lake? What might the lake be used for? Image: LEARNZ. 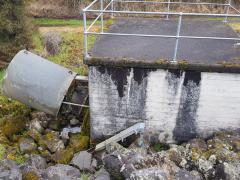 This is where water is released from Lake Otamangakau. It is also where elvers (young eels) get to on their migration up the river. I wonder how the eels are gathered from here to be transferred to the lake. Image: LEARNZ. 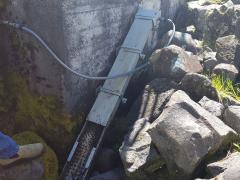 Water from the lake is let down this type of fish ladder. The elver travel up because they think it is the way to the lake. I wonder how the elver know that the water they are travelling through is from the lake. Image: LEARNZ. 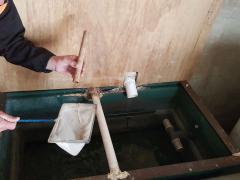 The fish ladder ends up in this tank, and so do the elvers. They are collected from here and transferred to the lake. Image: LEARNZ. 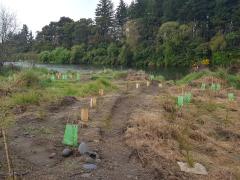 Here you can see part of a Project Tongariro restoration planting site next to the Tongariro River. I wonder why the young plants have coverings around them. Image: LEARNZ. 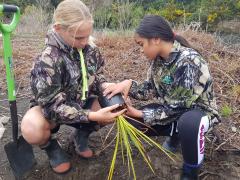 Emma and Anahera prepare to plant a tī kouka/cabbage tree at the Project Tongariro restoration site. How does planting next to a stream or river help the wildlife? Image: LEARNZ. 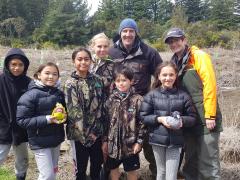 Students Para, Tiaho, Anahera, Emma, Conall, Grace, with Krysia and Andrew and the ambassadors. Is there a restoration project near you that you can be part of? Image: LEARNZ.