It rained heavily overnight and you woke to low cloud hanging around the hills of Picton. At least there was no wind and the Sounds looked calm and inviting. You met with Pete and Takutai out at Waikawa Bay. They had promised to take you and Brad Cooper from LINZ out to Meretoto, Ship Cove near the entrance of the Sounds. Here you will find out more about Captain Cook and his three voyages to Aotearoa.

Before you could leave the wharf, you had to make the most of cell phone coverage and complete the web conference. You spoke to Knights Stream School and Ngatimoti School. They had lots of questions about Cook and Matariki which Brad answered. It was interesting to hear the effort that Cook put into keeping his crew healthy. A major challenge was trying to prevent scurvy. This is a disease caused by lack of vitamin C. Many sailors suffered from scurvy because they could not get enough fresh vegetables. You can listen to the recorded web conference to find out more.

After the web conference you set off for Meretoto on Tutanekai, a 90-year-old classic launch with all the comforts of home. School groups can also book tours on this boat.The water was an amazing emerald colour and you sat back to enjoy the two hour trip. Before long Takutai spotted some bottlenose dolphins and everyone scrambled to the front of the boat to watch them surf the bow wave. It was fantastic to see these creatures up close and I couldn’t help but admire their speed and grace. It made me wonder about what Cook saw back in 1770 when he first visited the Marlborough Sounds.

As you steamed your way towards Meretoto, Brad showed you how Captain Cook would have done a running survey. To do this, you need to be sailing close to shore, so you can take compass readings of obvious landmarks. Then you need to sail a short distance along the coast so that you can take readings of the same landmarks from a different position. Brad then sketched the coastline between the plotted landmarks to complete the outline. This is how Cook charted the coastline of Aotearoa. You can find out more by watching the video.

Tools of the trade

Brad showed you a sextant which is a tool that Captain Cook would have relied on. A Sextant is a navigation instrument used to measure angles, particularly the altitudes of the sun and stars above the horizon. A navigator uses a sextant to find their position on the earth. Cook worked out latitude with a sextant by measuring the angle between the horizon and the sun when it was at its highest position in the sky. Longitude was much more difficult to work out because it is based on time. To find their longitude, Cook needed to know the time in both Greenwich and New Zealand. He knew how long the sun took to move across the sky, and this helped him to work out local (New Zealand) time. But there weren’t any clocks that kept Greenwich time accurately enough. Instead, Cook had to work out the time in Greenwich by making a long series of calculations. On his second and third voyages he was able to take a chronometer or watch to make it easier to work out longitude. You can watch the video about this.

Kupe and the giant wheke

You arrived at Meretoto, Ship Cove just as the drizzle cleared. You could hear lots of bird song as DOC and lots of locals have been working to trap predators and bring birds back to the area. When Cook came here the bird song was so loud that his crew complained about not being able to sleep. Pete showed you the pou that has been carved to tell the story of Kupe. Kupe was the first Polynesian to discover the islands of New Zealand. It is said that Kupe chased a great wheke or octopus across the Pacific to Aotearoa. He followed the creature all the way to Raukawakawa (Cook Strait), where it was finally destroyed. You can find out more about this story in the video.

On the journey home Brad showed you how to measure the depth of water using a lead line. This weighted line has measurements marked on it and is lowered until it reaches the sea floor. This method is still used today to check the accuracy of depths found using echo sounding. A recent survey has been completed by the council and LINZ and you can find out more about what lies beneath the Sounds here. You will find out more about the modern methods of nautical navigation tomorrow when you head to the Nelson Marlborough Institute of Technology. 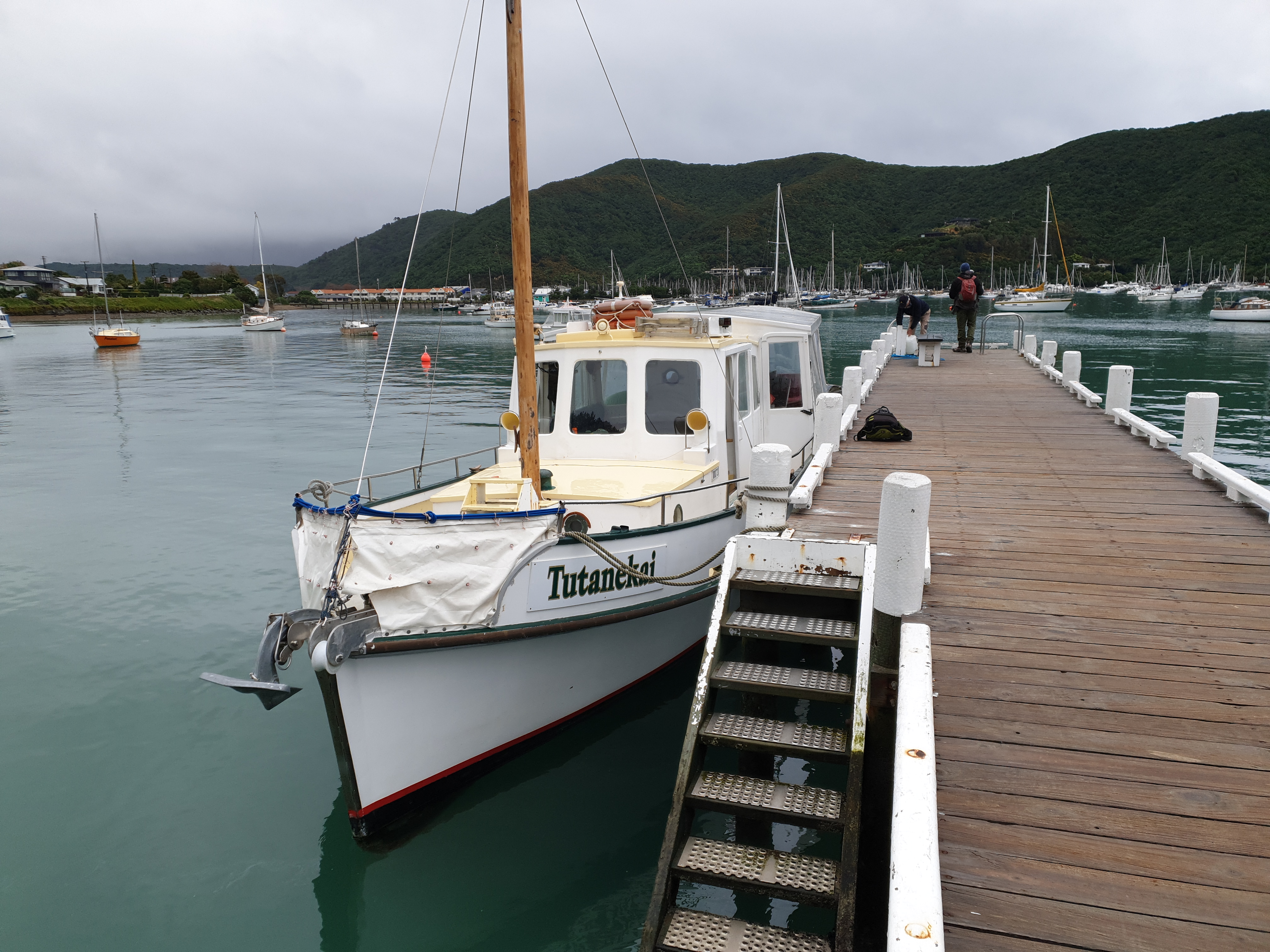 The Tutanekai is ready to take you from Waikawa to Meretoto, Ship Cove. Image: Shelley Hersey, LEARNZ. 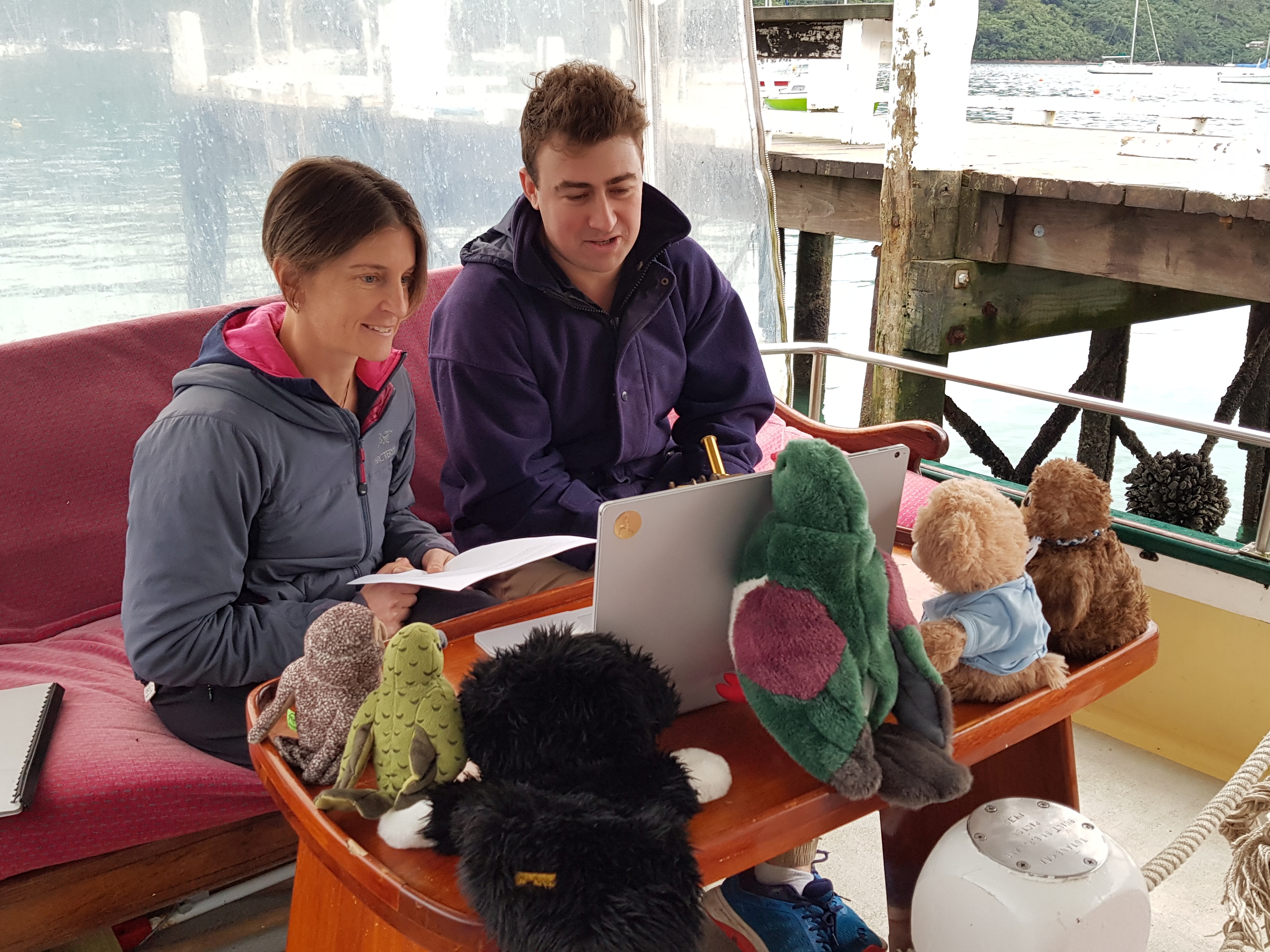 Onboard the Tutanekai Shelley Brad and the ambassadors talk to Knights Stream School and Ngatimoti School during the web conference. Image: Andrew Penny, LEARNZ. 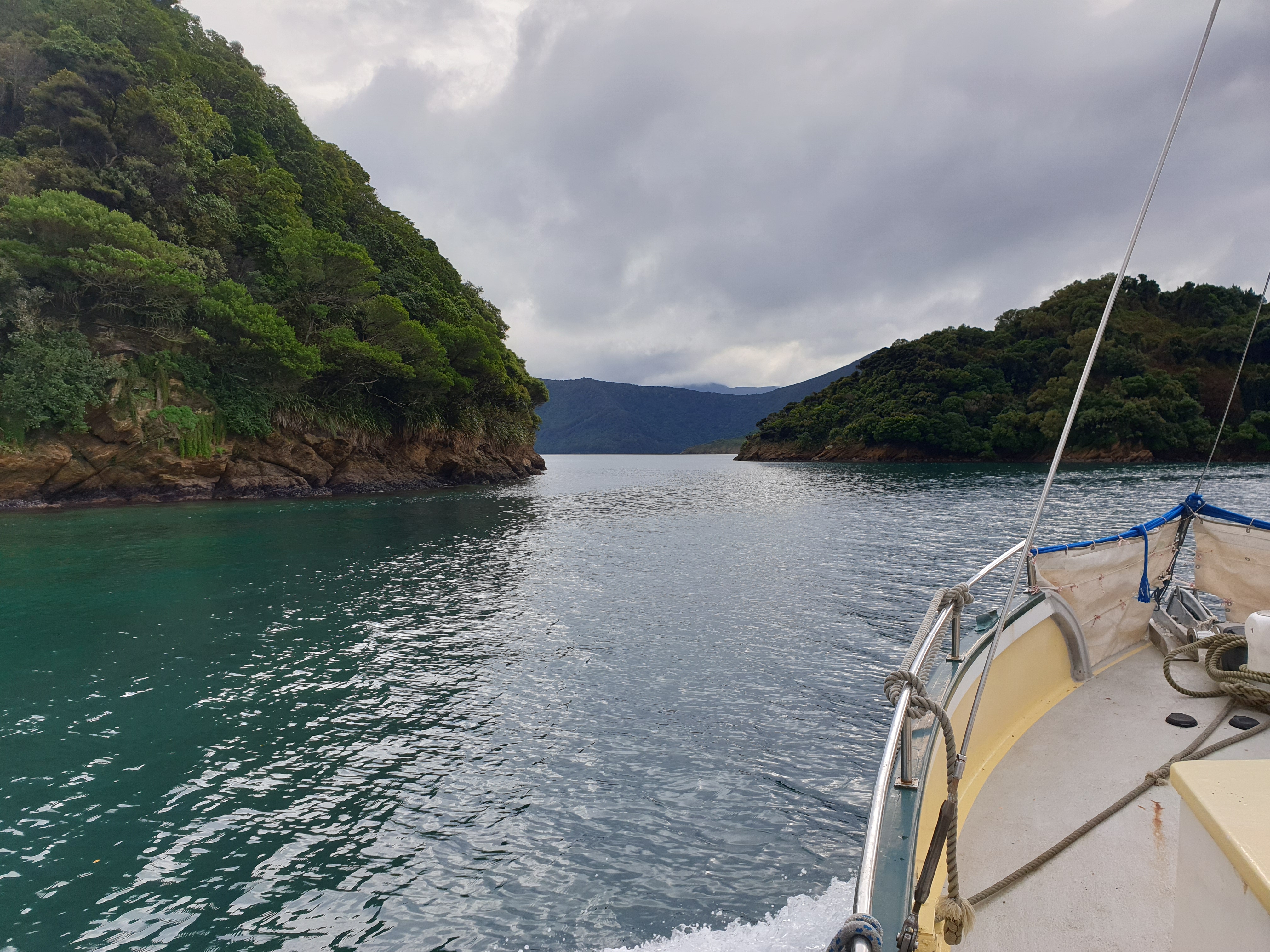 You enjoyed calm conditions as you headed up to Meretoto, Ship Cove. Image: Shelley Hersey, LEARNZ. 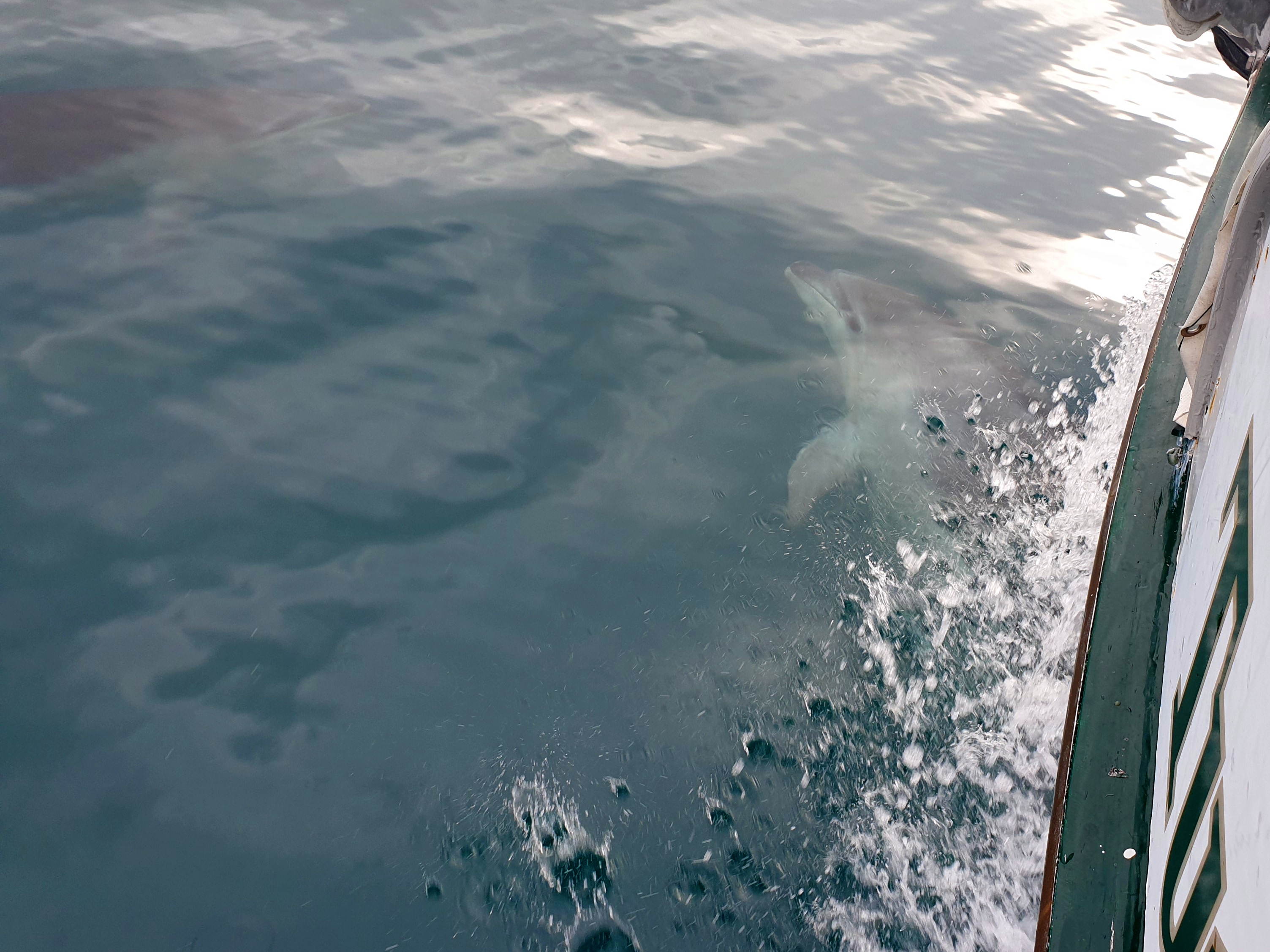 You were lucky enough to see dolphins surfing the bow wave of the boat. What type of dolphins are these? Image: Shelley Hersey, LEARNZ. 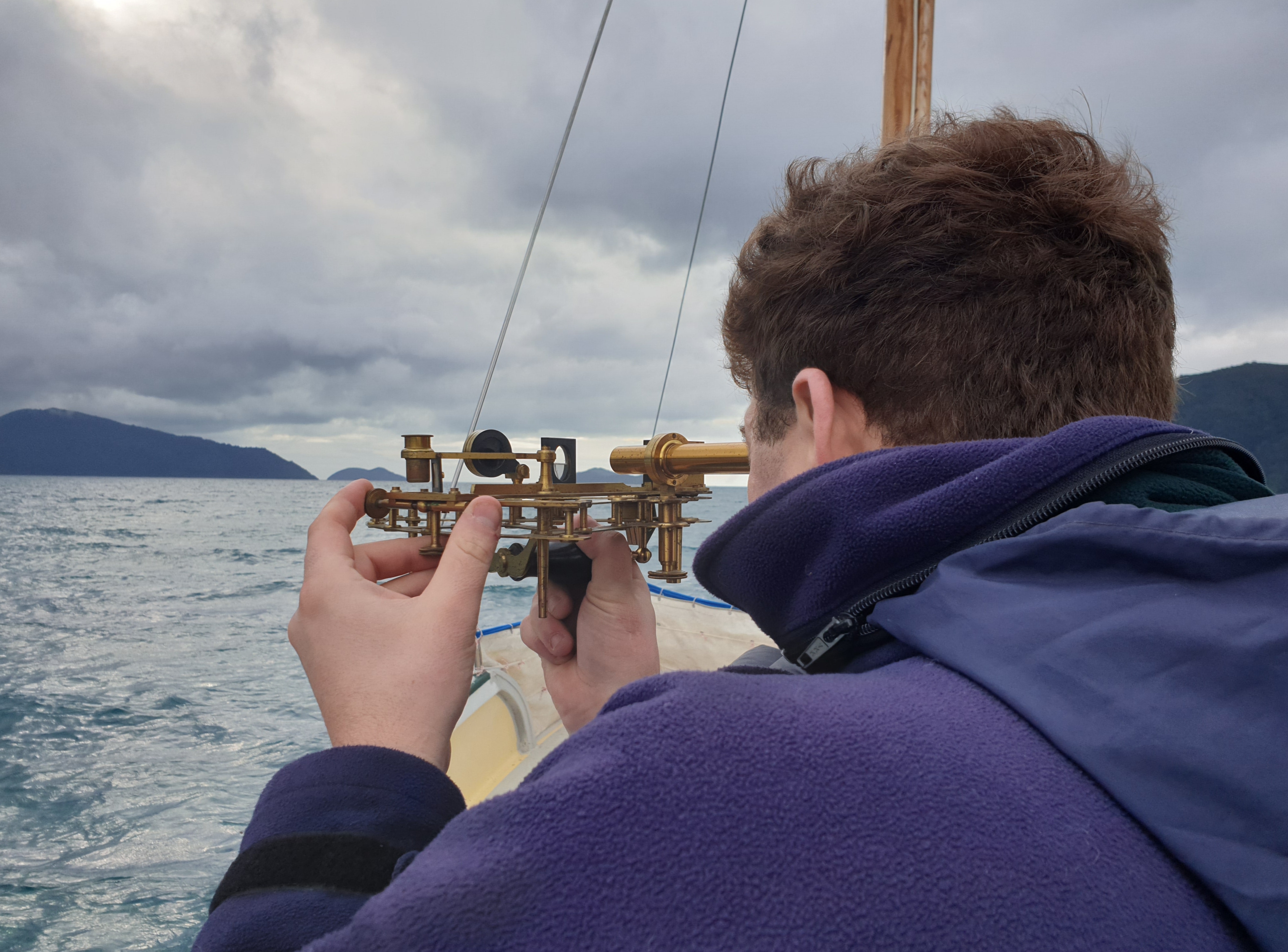 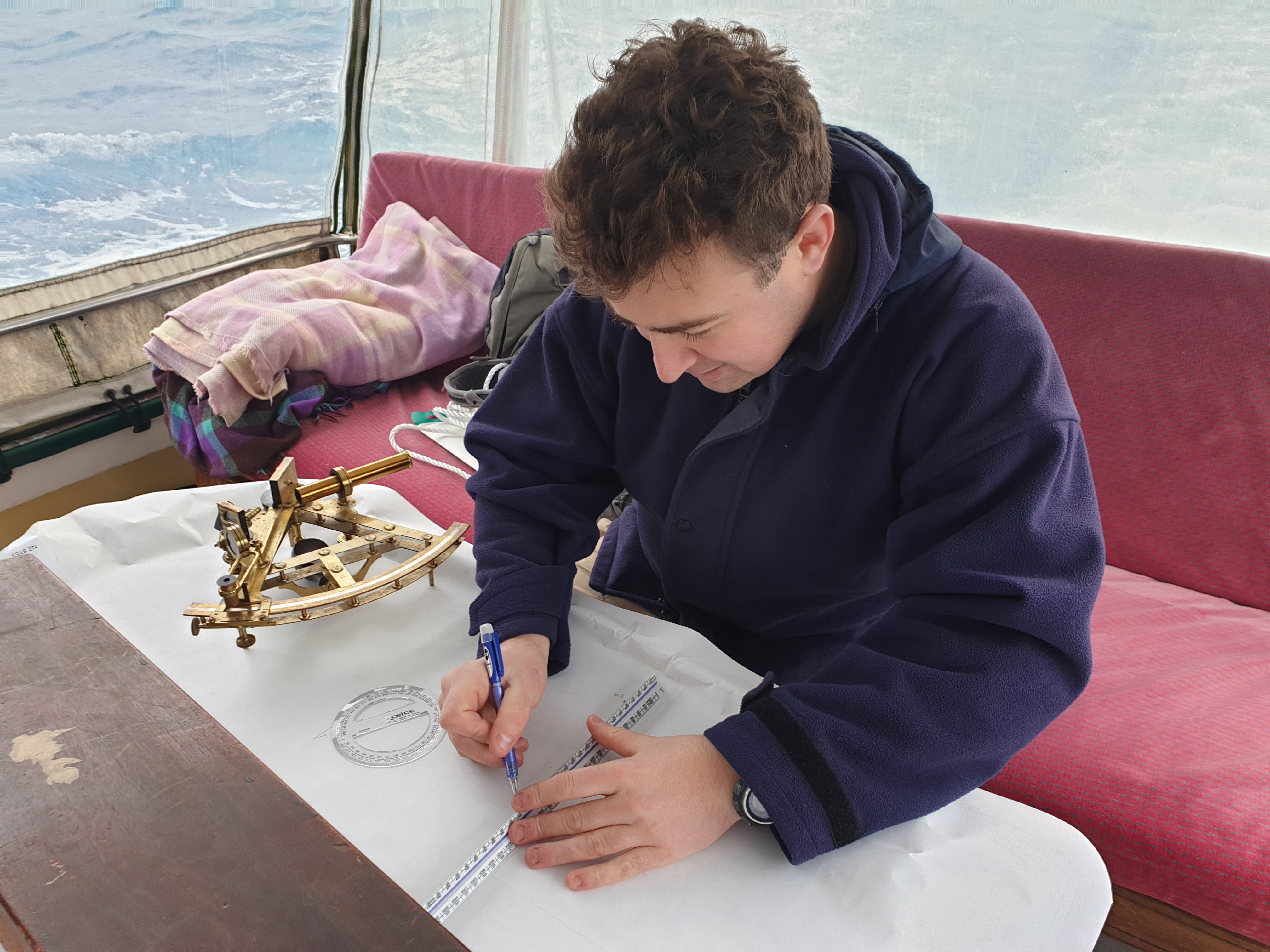 Brad plots the coastline on a chart using information from the speed of the boat, bearings measured on a sextant and time. Image: Shelley Hersey, LEARNZ. 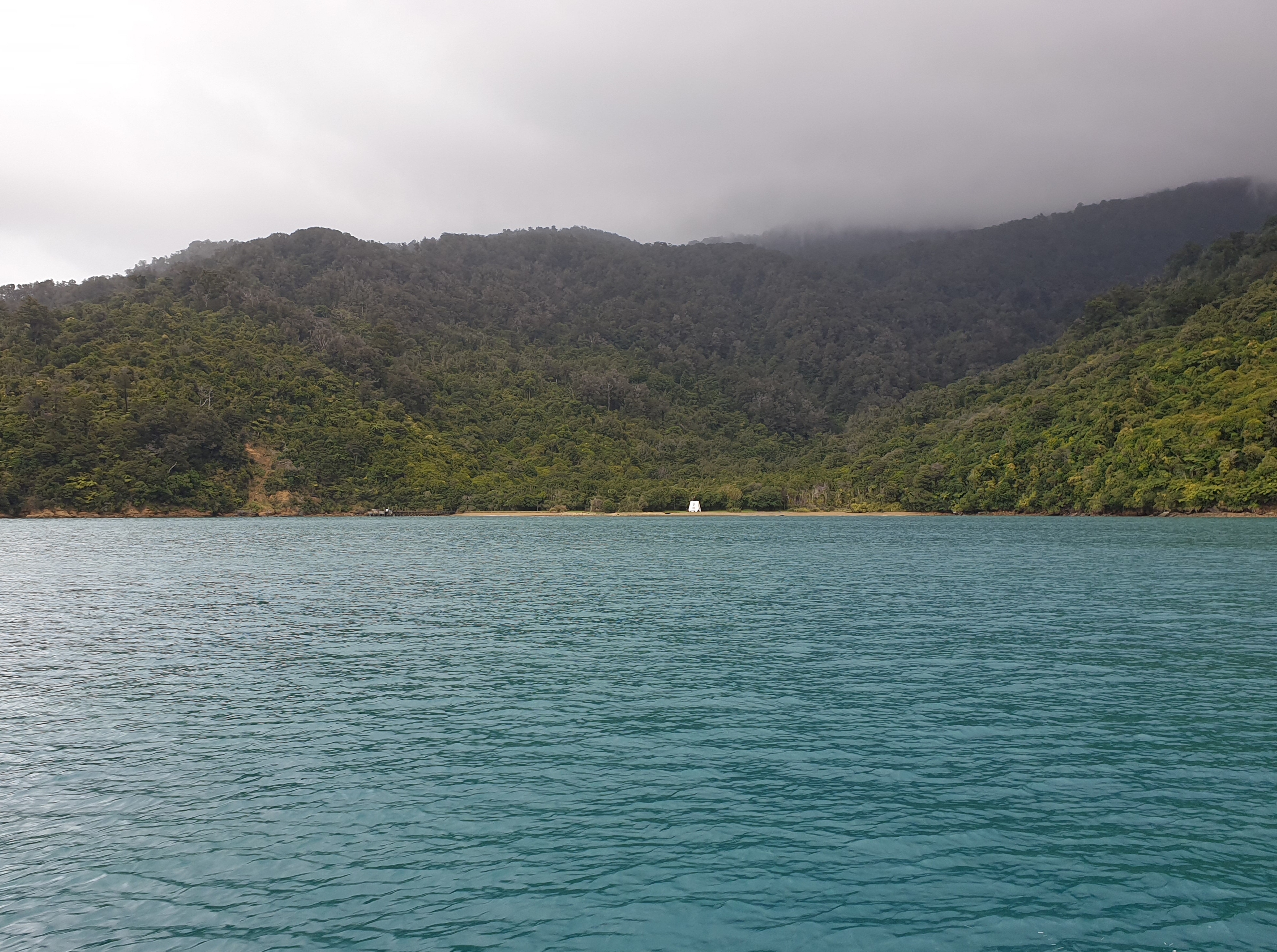 Approaching Meretoto, Ship Cove you can see a monument to Captain Cook. Why do you think Cook spent so much time here? Image: Shelley Hersey, LEARNZ. 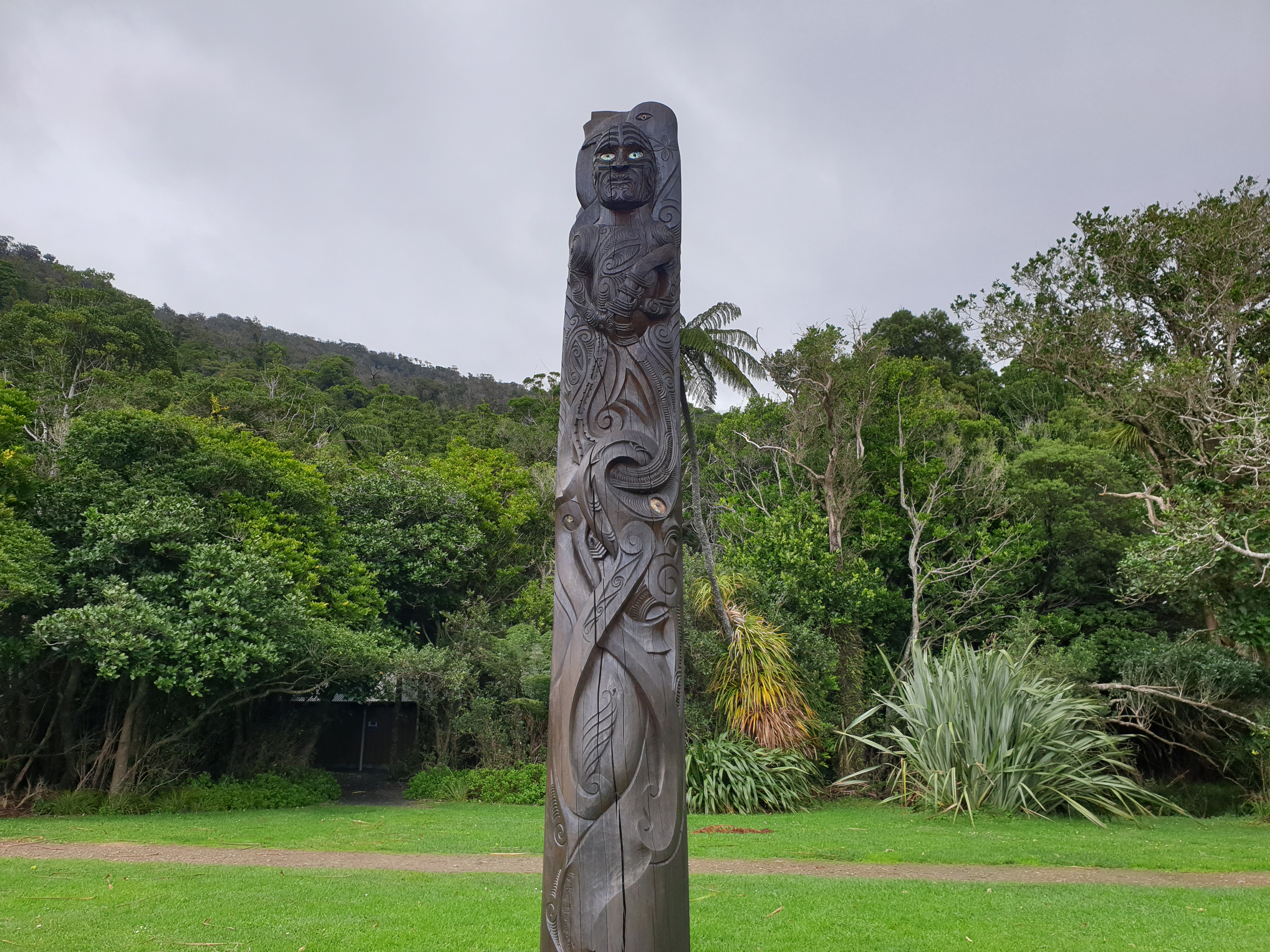 This pou tells the story of Kupe and his battle with a giant wheke (octopus). Image: Shelley Hersey, LEARNZ. 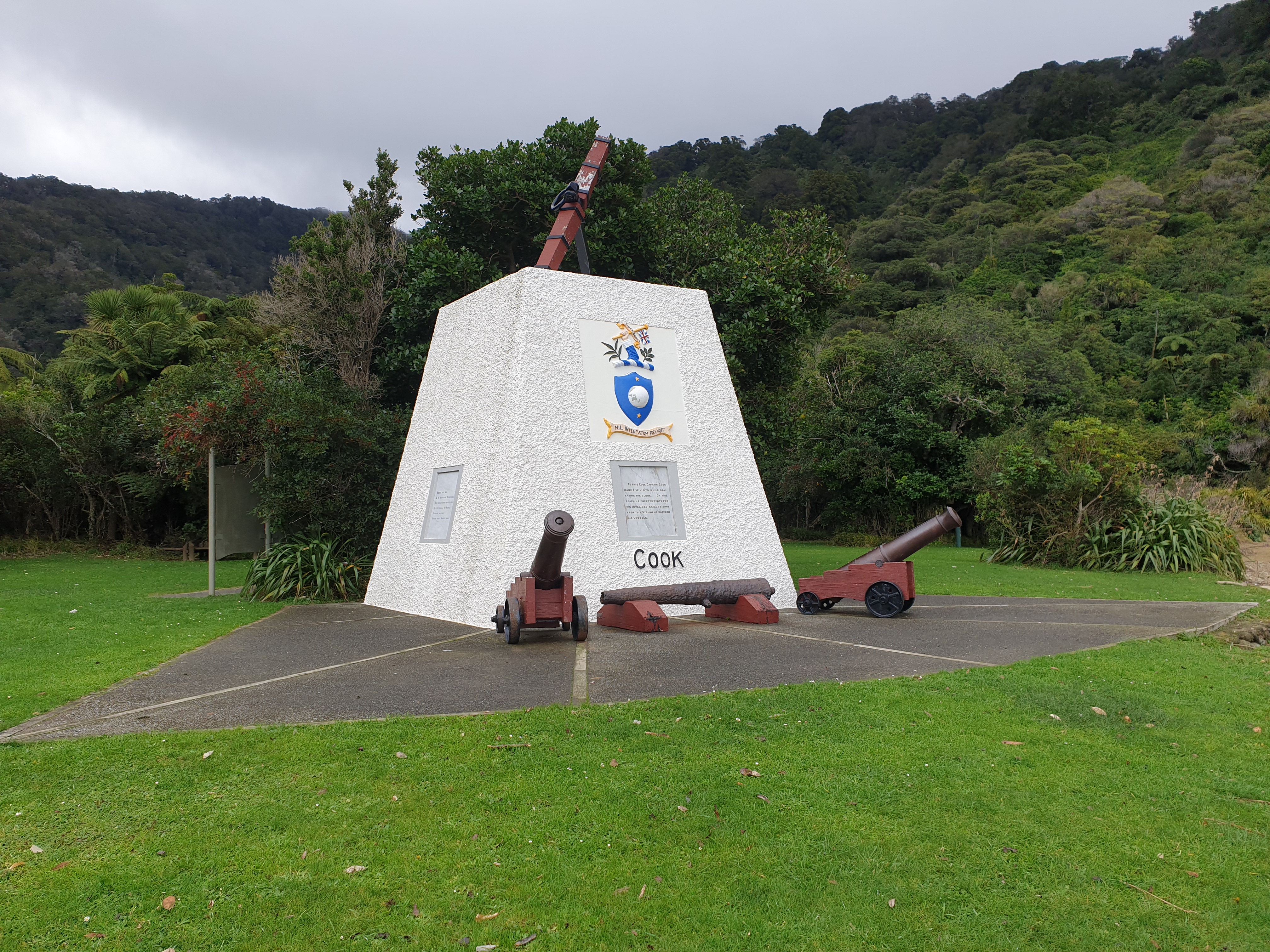 This monument commemorates Cook and the first encounters he had with local Māori. Image: Shelley Hersey, LEARNZ. 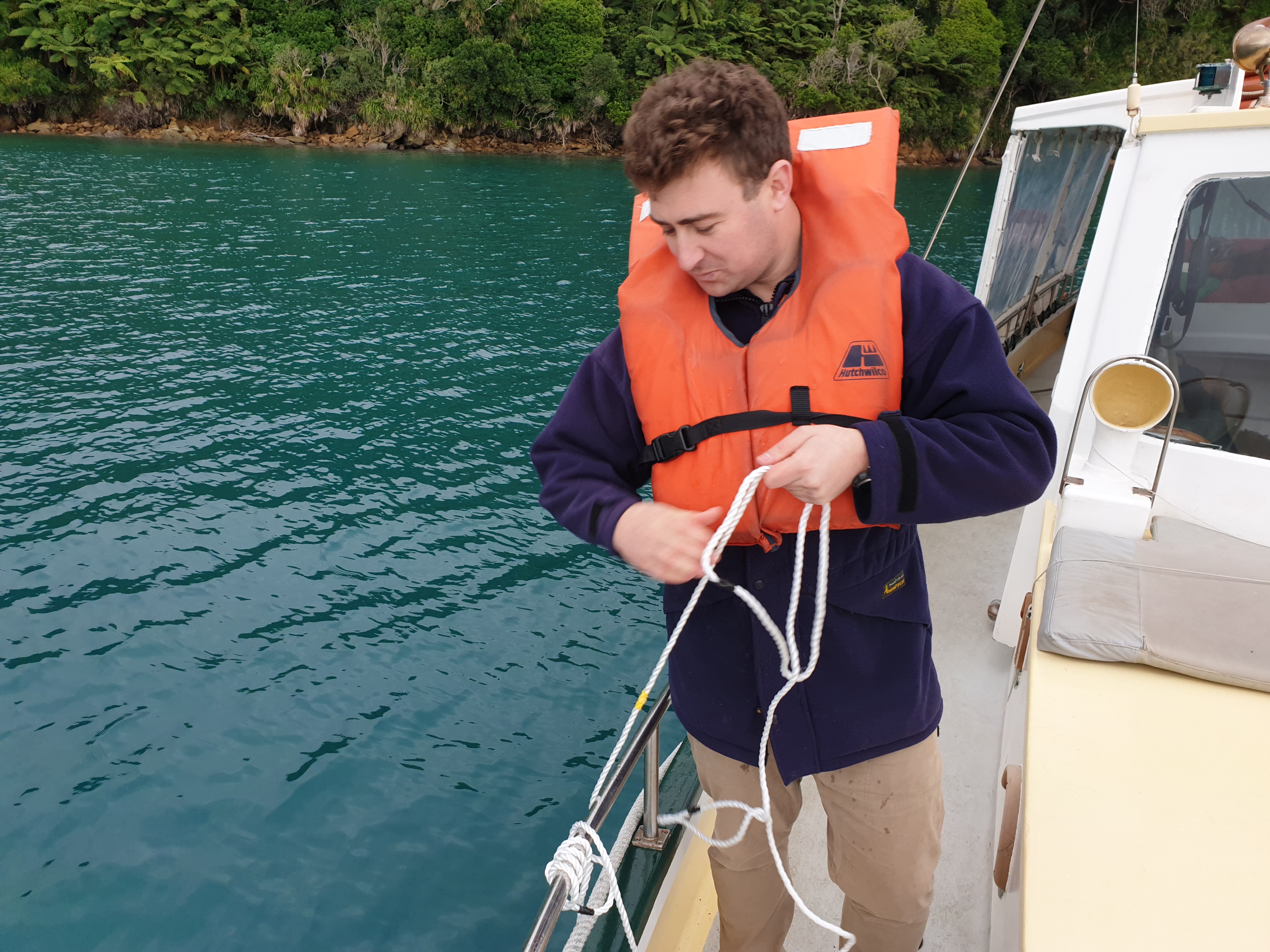 During the journey home Brad showed you how to measure the depth of water using a lead line. Image: Shelley Hersey, LEARNZ.