You made the most of your first full day in Iceland by heading out to Reykjanes Peninsula with volcanologist Ben Kennedy. This area is a Geopark which means it has important geological features worth protecting. This area is about a 45 minute drive from Reykjavik. Even though there wasn’t much traffic it was a scary drive because in Iceland everyone drives on the right side of the road. It felt very strange and it took a lot of concentration to stay on the correct side of the road.

Life at the boundary

Gro Birkefeldt Møller Pedersen from the Nordic Volcanology Centre in Iceland met with you on the Peninsula to show you some of the interesting landscape features. Gro is from Denmark but she came to Iceland because there are no volcanoes in Denmark and she wanted to learn more about volcanology. Gro took you to the tip of the peninsula where the Mid Atlantic Ridge comes ashore. The Mid-Atlantic Ridge is a 65,000km line of mountains that encircles the earth like a seam of a softball. Although 90% of this mountain range lies deep below the surface of the ocean, it rises above sea-level here on the Reykjanes Peninsula. This is one of the only places on earth where it is visible. This ridge marks the boundary between the North American and Eurasian tectonic plates. These plates are pulling away from each other stretching Iceland at an average rate of one centimetre every year. You can watch the video to find out more about this.

Iceland also sits on a hot spot or mantle plume, where magma is especially close to the surface. This explains why land formed in this spot in the middle of the ocean, and not elsewhere along the tectonic ridge. After finding out about the geological history of Iceland Ben talked to you about some of the similarities and differences between Iceland and New Zealand. The reason why we have travelled all this way to Iceland is to learn from Icelanders experiences of natural hazards. Iceland has volcanoes, earthquakes and landslides just like New Zealand. Both countries sit on a plate boundary but in New Zealand the plates are colliding rather than spreading apart. Both countries have frequent earthquakes, landslides and volcanic eruptions. Iceland has more glaciers than New Zealand. When there are volcanoes below ice an eruption causes rapid melting. This can lead to flash floods and lahars. Scientists are working hard in both New Zealand and Iceland to gain a better understanding of earthquakes and volcanoes. This research will help us to better prepare for future events. Watch the video to find out more.

Gro took you to the bridge between continents. This bridge was built as a symbol for the connection between Europe and North America. As the plates move apart, long fractures, known as fissures form due to stresses created by the tension that builds up as the plates move away from each other. It was impressive to see how deep and wide this fissure is and it made me think about the huge and powerful forces that shape our Earth. Across the lava fields of the peninsula you could see a line of volcanic cones. The Stampar Crater Row is a 4-kilometre long fissure along which volcanic vents have formed as lava erupted. You can see this in the video. Everywhere we went on the peninsula we could see plumes of steam rising from the ground. There is a geothermal power station here which harnesses the heat created by magma close to the surface to heat homes. 90% of home in Iceland are heated using geothermal energy. You will find out more about this later in the field trip.

After a fun few hours exploring the windswept peninsula you headed back to Reykjavik to talk to Hulda. Hulda works for the Iceland Catastrophe Insurance Company which is like EQC in New Zealand. New Zealand and Iceland are the only countries in the world to have insurance like this which covers the loss caused by natural hazards such as volcanic eruptions, landslides and earthquakes. It was interesting to hear Hulda talk about the need to prepare for the unexpected. Often people forget about the risks associated with living in a geologically active place but by paying a small amount into an insurance fund each year we can create a lot of money. Without this money people can not rebuild after disasters. It made me think about how important it is to prepare for natural disasters to make sure we can not only survive but recover from big events. You can watch the video about this.

You ended the day with a two-hour drive to Hvolsvöllur where you spoke to schools during the live webconference. It has been a long but fantastic day here in sunny Iceland and now I’m off to catch up on some much needed sleep.

From Reykjavik to Reykjanes Peninsula and return, then travel south to Hvolsvöllur: 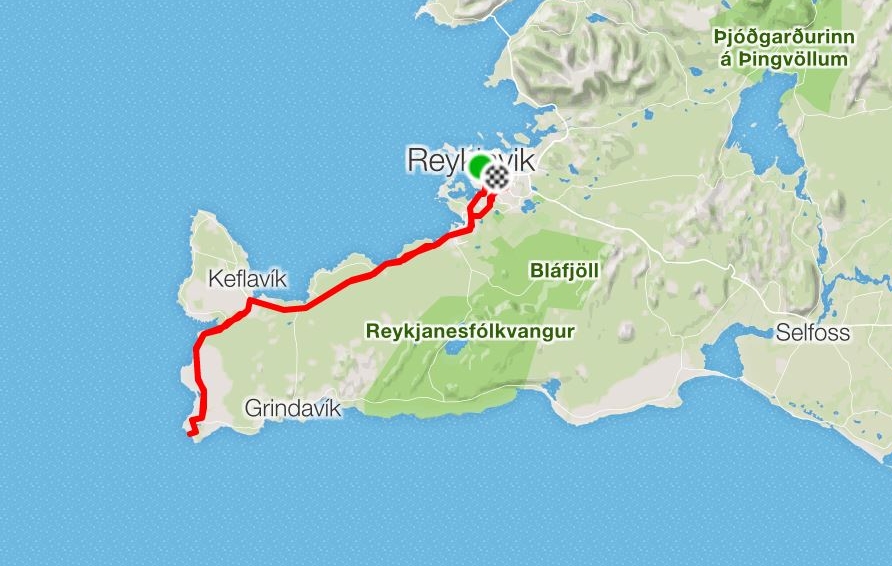 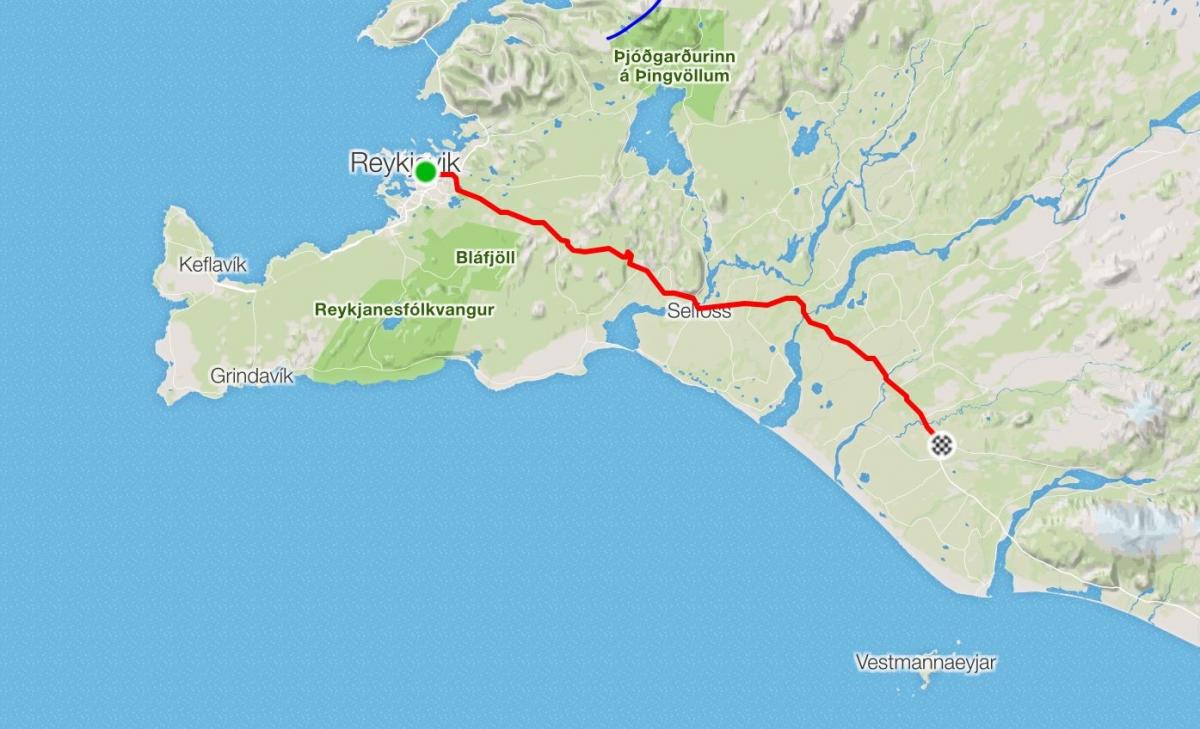 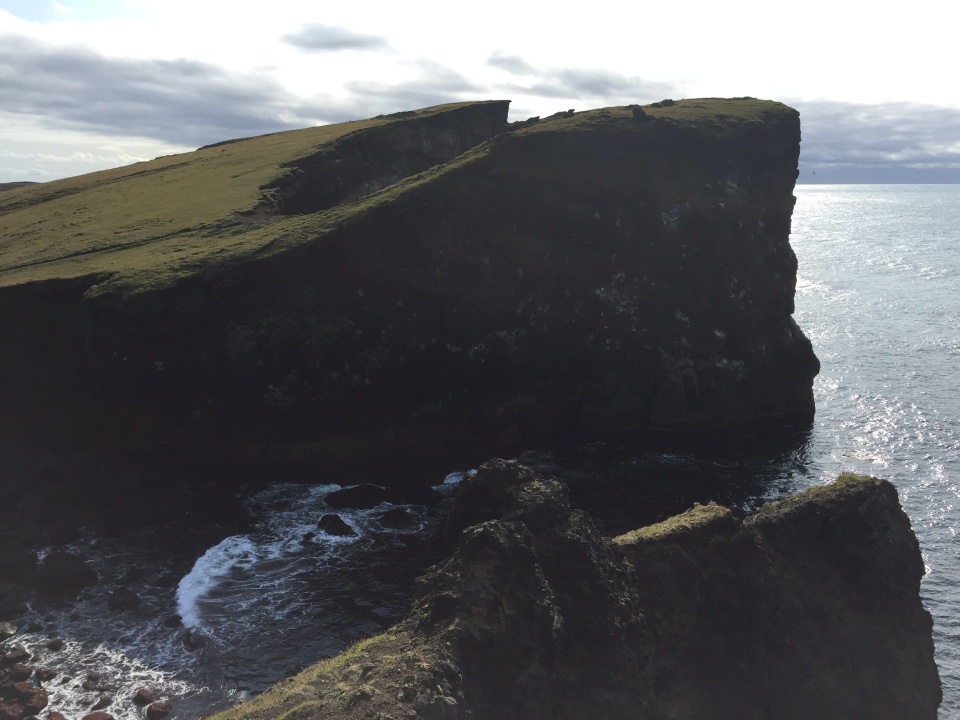 You began the day at the tip of the Reykjanes Peninsula where you could see an old volcanic cone that has been eroded by the sea. Image: LEARNZ. 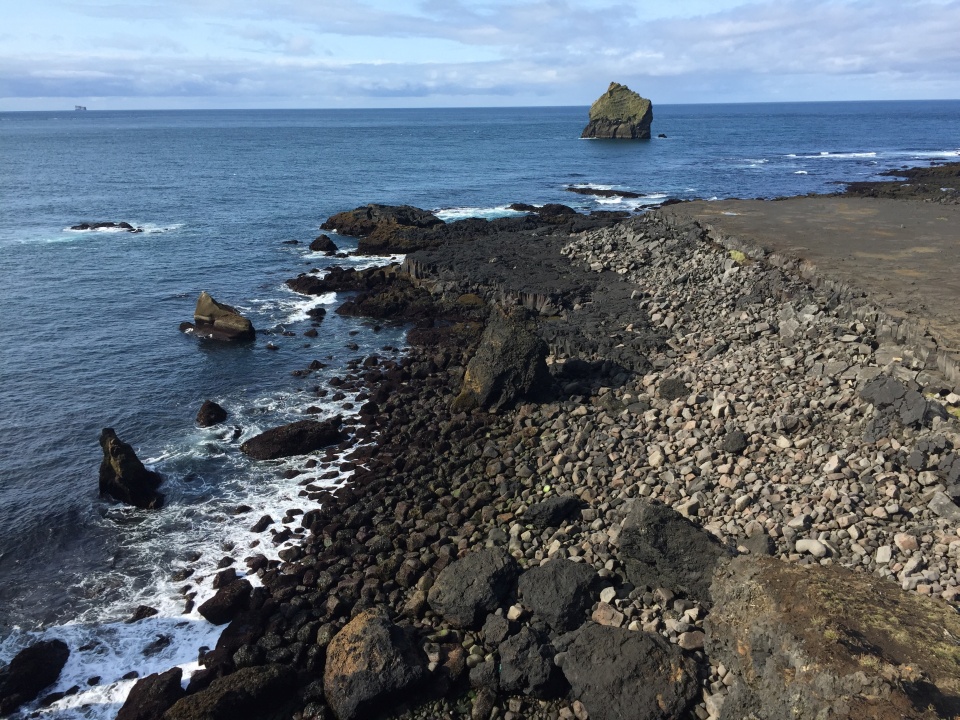 Looking out over the tip of the Reykjanes Peninsula where the Mid Atlantic Ridge comes ashore. Image: LEARNZ. 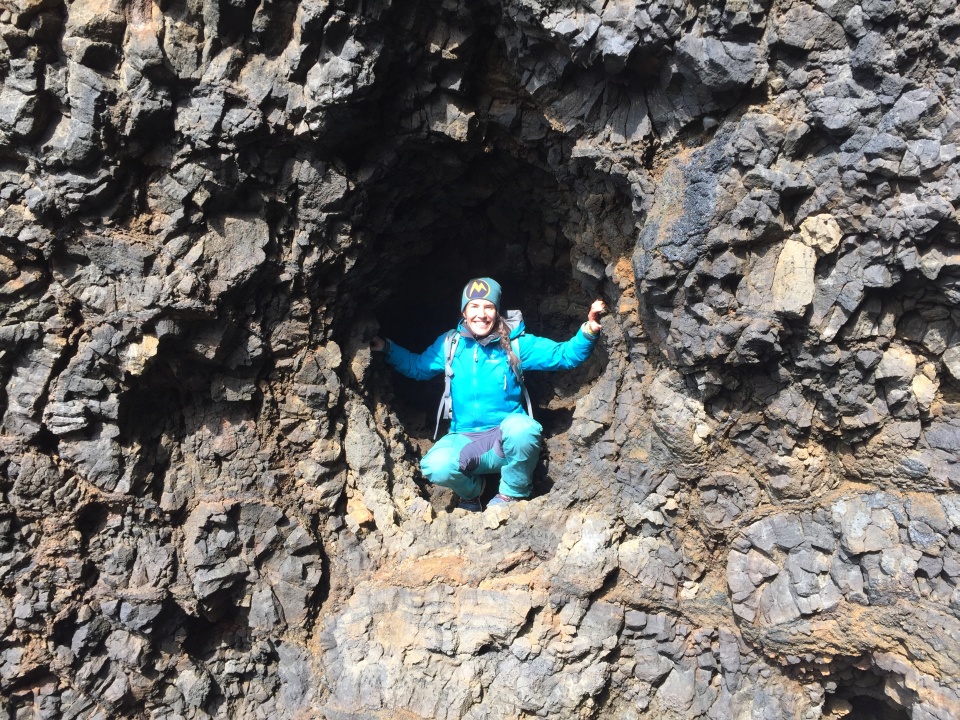 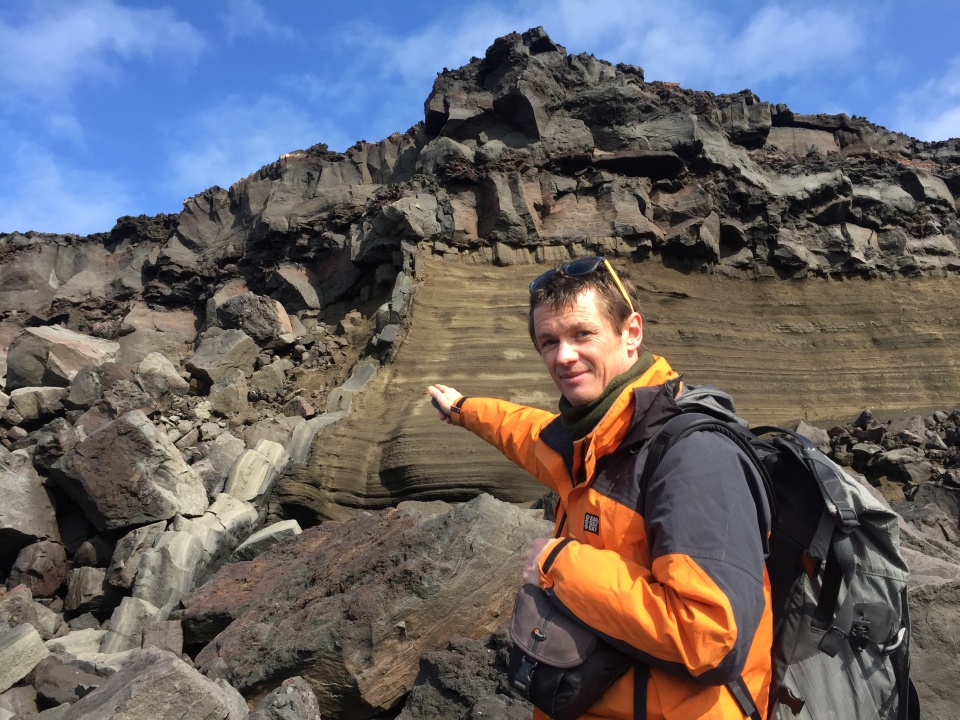 Ben points out a line where magma rose to the surface through a dyke or fissure. Image: LEARNZ. 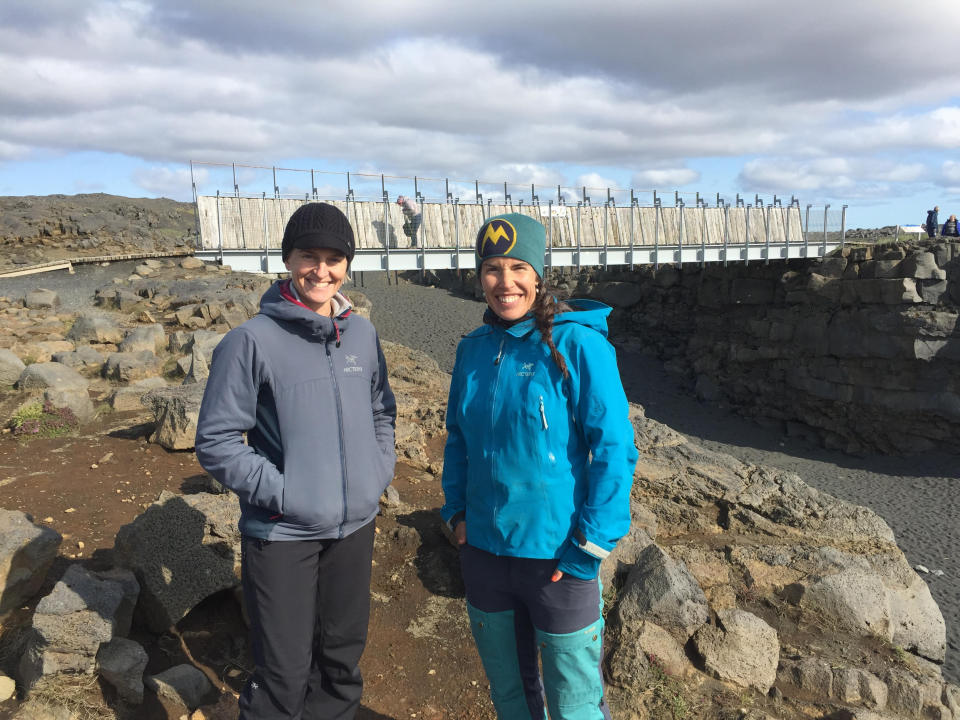 Shelley and Gro stand beside the bridge between continents. They are standing on the North American side of the two continents. Image: LEARNZ. 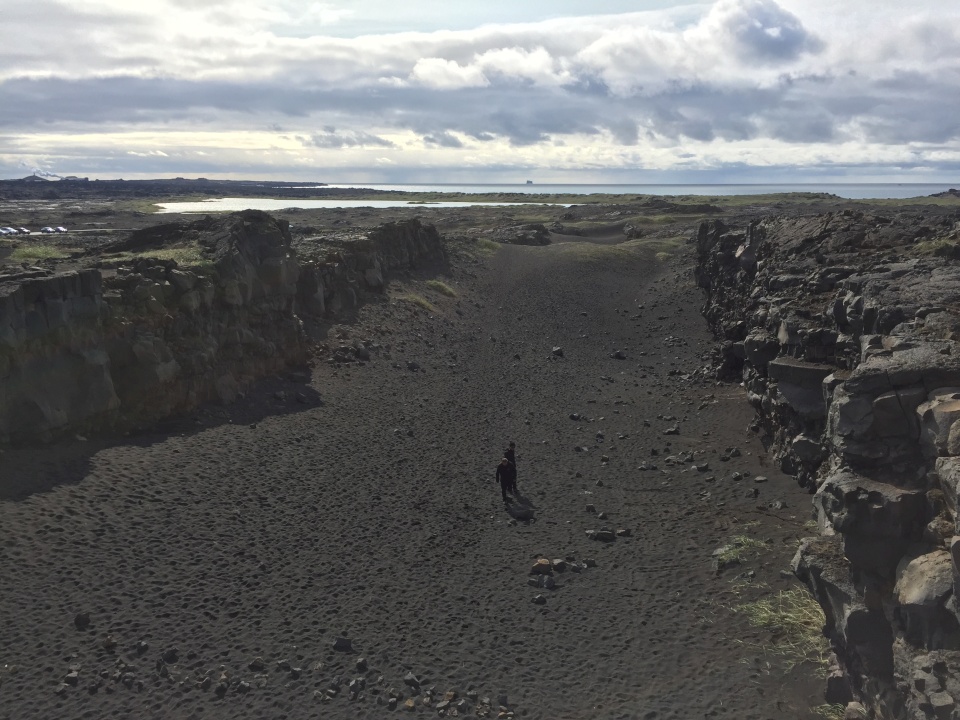 This rift or fissure has been created by the tension of two tectonic plates pulling apart. Image: LEARNZ. 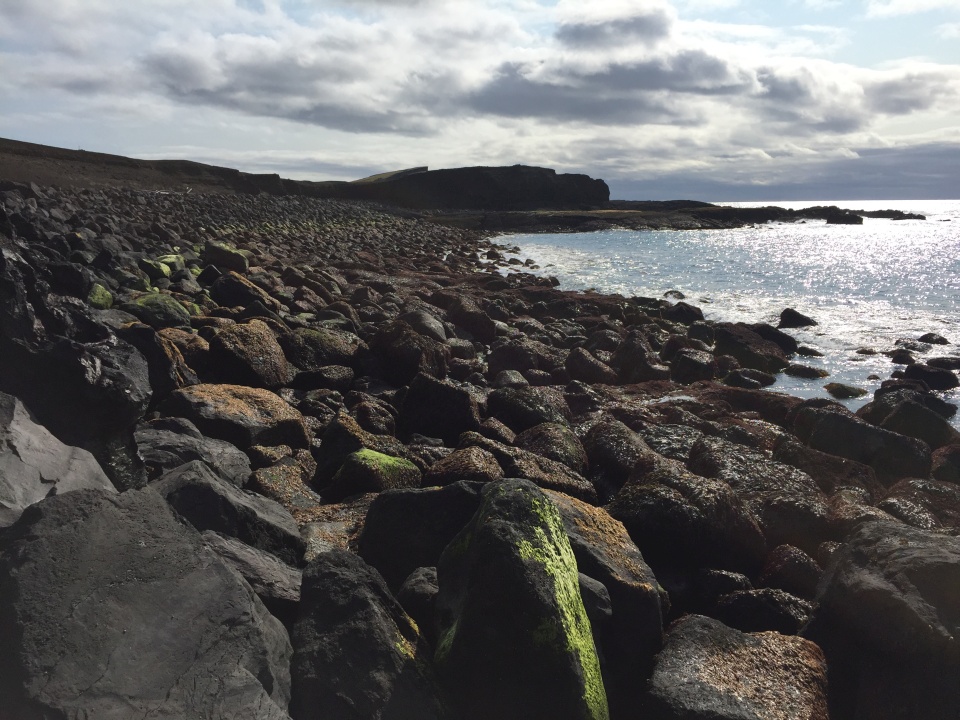 In Iceland you are surrounded by basalt rock. Iceland is made of basalt rock created by a magma plume or hot spot. Image: LEARNZ. 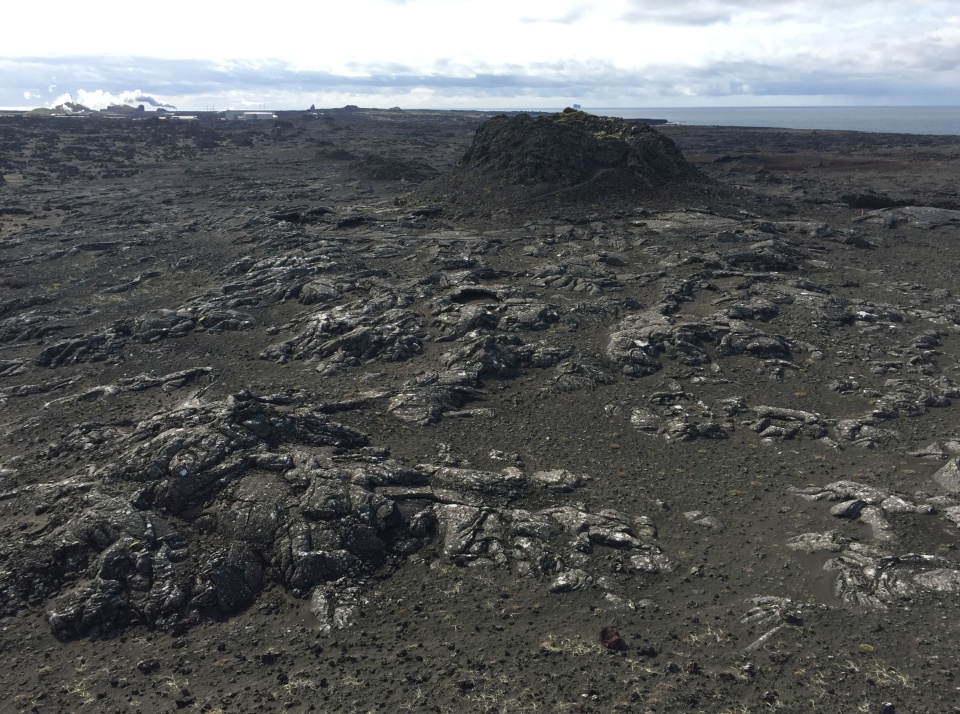 Looking across a row of volcanic vents known as the Stampar Crater Row. Image: LEARNZ. 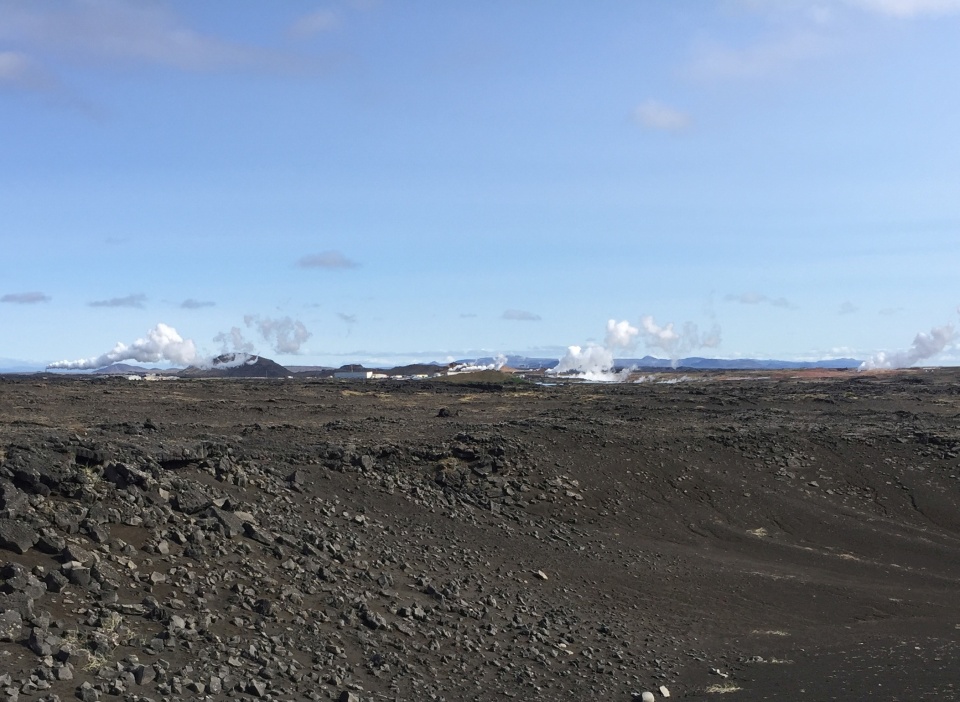 One of the benefits of having volcanic activity is that you can harness geothermal power. Image: LEARNZ. 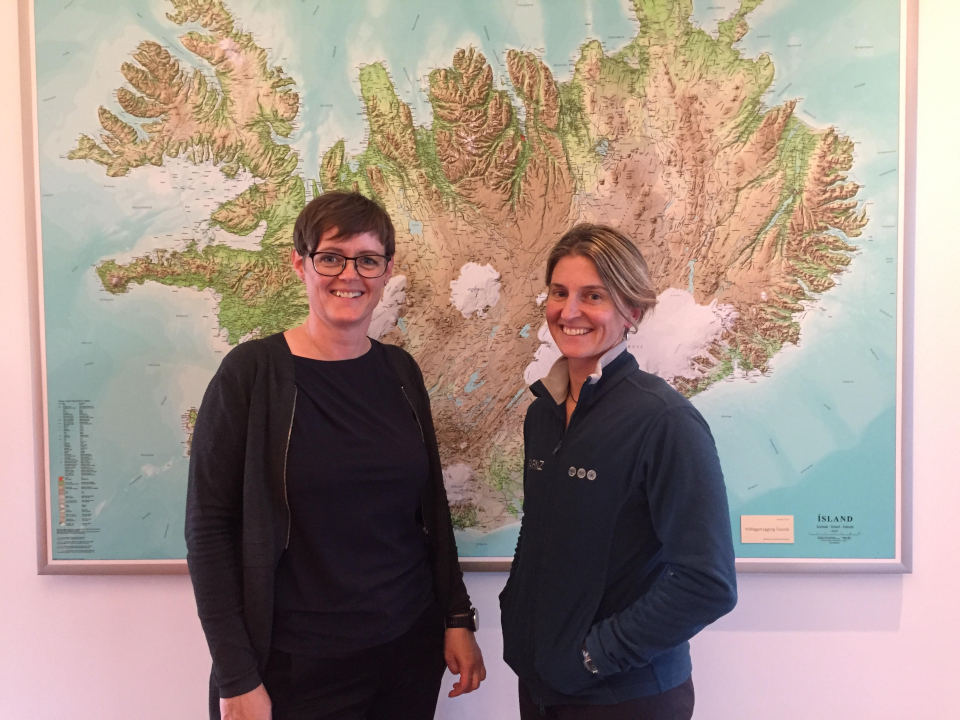 Hulda from the Iceland Catastrophe Insurance Company talks to Shelley about how to be more resilient to natural hazards. Image: LEARNZ.