The 2016 Mw 7.8 earthquake produced the strongest ground shaking ever recorded for an earthquake in New Zealand. The 2016 earthquake closed State Highway 1 (SH1) and the Main North Line railway between Picton and Christchurch. All roads and the rail network in and out of the Kaikōura area were damaged and closed by the slips. Kaikōura and the surrounding rural communities were isolated. Restoring these transport networks quickly was a top priority, while at the same time keeping the communities safe, engaged, and informed.

The North Canterbury Transport Infrastructure Recovery alliance (NCTIR) was set-up to restore the road and rail networks between Picton and Christchurch. The top priority was to reopen SH1 and the Main North Line railway. Construction of these transport networks had to happen at the same time, and quickly.

A safe, durable road and rail line had to be designed that minimised impact on the environment, wildlife, and landscape. The difficult terrain, along with coastal and weather conditions, has been and still is, a major challenge. These environmental factors mean that changes are made regularly to the recovery programme to keep everyone safe and the work on track. 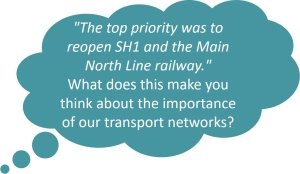 A different Picton to Christchurch route

With SH1 closed after the earthquake, drivers between Christchurch and Picton had to be diverted to a different route along State Highways 63, 6, 65 and 7 (and the alpine Lewis Pass). The increased traffic along this route impacted the road as well as local communities. New speed limits were set to improve safety for both drivers and communities. The road was also upgraded so it could handle the extra traffic.

The Inland Road (Route 70) between Kaikōura and Waiau

The badly damaged road had to be made safe for general use. This included:

Access through this route was restored within a few days of the earthquake. Emergency supplies were then able to get through to areas cut off by earthquake damage.

The Main North Line railway between Picton and Christchurch is important for moving freight and people between the North and South islands. Nearly 900 sites along this line were damaged. The line was buried under more than 90 slips and landslides. 59 bridges and 20 rail tunnels were also damaged.

10 months after the earthquake, some freight rail services were able to start again. This helped to reduce the number of trucks on the road and improve the ability to supply goods to the area. KiwiRail is still working hard to get the track ready for passenger trains but these won’t be running until mid-2018 at the earliest.

As a measure of the scale of the work that was carried out, about 50,000 cubic metres of ballast (enough to fill 20 Olympic-sized swimming pools) was used to restore the track.

Commemorating the rebuild of the line with a sculpture

A sculpture was unveiled at the reopening event in Kaikōura on 15 September 2017. The sculpture commemorated the effort put in by the 1500 people involved in the Main North Line rebuild. It also recognised the November 2016 earthquake event and its effects on the wider community.

NCTIR worked closely with local communities to provide employment and business opportunities. More than 1300 people from 100 organisations joined the rebuild effort, which included many residents and businesses from Kaikōura and surrounding areas.

Keeping everyone informed has been an important part of this NCTIR project, including:

Regular community meetings were held in the Kaikōura area, as well as ‘door-knocks’ in some neighbourhoods to discuss upcoming high-impact work.

A NCTIR office was opened on Kaikōura's main street, for residents and others wanting updates on the recovery work.

Watch: Our Story - an animated video showing the steps taken to reconnect communities.

Watch:  A Day in the Life at Ohau Point: September 2017  - showing NCTIR crews working at Ohau Point, North of Kaikōura, the base of a major landslide during reconstruction of SH1.

Previous
Guardianship of the Changing Waters
Next
Communities Adapting to Change 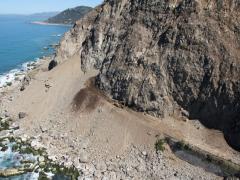 More than 200 areas of road along SH1 affected by the earthquake. Image: NZTA. 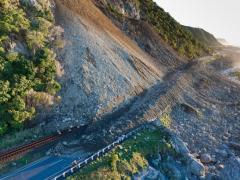 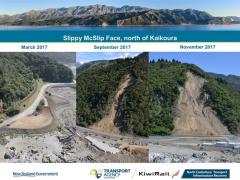 The difficult terrain, along with coastal and weather conditions, has been a major challenge. Image: NZTA. 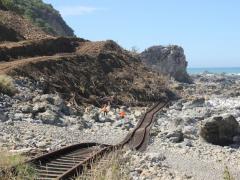 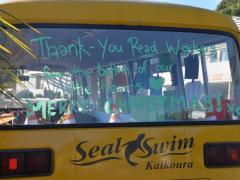 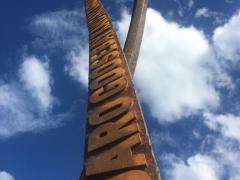 This sculpture by Ben Foster commemorated the effort involved in the Main North Line rebuild. It also recognised the November 2016 earthquake event and its effects on the wider community. Image: Kaikoura Star. 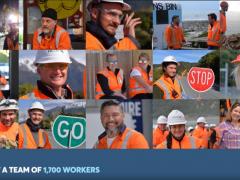 NCTIR worked closely with local communities. More than 1300 people from 100 organisations joined the rebuild effort, which included many people from Kaikōura and surrounding areas. Image: NZTA.