What is a Smart Motorway? | LEARNZ
Skip to main content

What is a Smart Motorway?

A smart motorway is actively monitored and managed by traffic operators through a network of sensors and radars, cameras, and speed and lane control signs.

What are the parts of a smart motorway?

A smart motorway is fitted with a network of detection equipment (radars, loops and CCTV cameras) and electronic signs that are programmed to respond automatically to manage the flow of traffic. As the volume of traffic increases, the smart motorway automatically adjusts the speed limit to reduce congestion and get as many vehicles as possible through the area. They are used effectively around the world as transport agencies seek to improve people’s journeys while getting the most out of existing road corridors.

There are three important parts of a smart motorway:

When all the parts come together, the stop/start nature of congestion is reduced, traffic moves more smoothly, more vehicles get through a section of road and everyone arrives at their destination sooner and more safely.

How do the smarts work?

Smart motorways reduce congestion by carefully controlling the flow of vehicles. The most critical time when the system can influence the severity of congestion is as the traffic volume begins to build, that is before the road becomes congested.

Detectors under the road and radars mounted on lighting poles and gantries count the number of vehicles in each lane, as well as the speed they’re travelling.

The smart system calculates the rate at which the road is becoming congested, factors in what is likely to happen based on traffic records that are continually updated and monitored, and automatically adjusts the speed limit to pace the traffic and delay queues being formed.

Watch this video to see how pacing traffic flow gets more vehicles through.

Find out more about the smart motorway from the NZTA website. 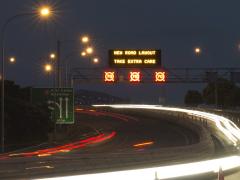 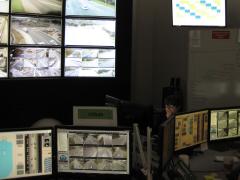 The smart motorway will be actively monitored and managed by traffic operators. Image: LEARNZ. 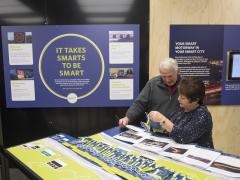 Being a smart driver is also part of the smart motorway system. Image: NZTA.

I wonder what is the most

Permalink Submitted by Anonymous on Mon, 2015-08-24 09:52
Comment:
I wonder what is the most expensive component? What does a smart sign cost?

I heard on an audioconference

Permalink Submitted by Kelly Asher on Tue, 2016-04-19 14:01
Comment:
The smart motorway seems to rely on motorists obeying the changing speed notifications. If you drive this section of motorway right now hardly anyone takes any notice of the 70km speed restrictions. The majority of people drive up to the next vehicle in front of them usually following too closely causing a concertina effect or tailback when someone brakes. New Zealanders are generally not very good drivers - you would be better to bring in something like a 10 year licence where you have to resit your licence. Some drivers have not had any driver education since there initial test which may have been 40 years ago.