Haere mai and welcome to the first LEARNZ field trip for 2016. I have been looking forward to returning to one of my favourite cities – Wellington, to begin the second and final Smart Motorways field trip. During this field trip you will see how New Zealand’s first ever smart motorway is being constructed.

You had to be up early this morning to catch your 9am flight from Dunedin to Wellington. A strong southerly wind was blowing across Dunedin but after a few bumps you were able to sit back and enjoy a smooth flight north. I love flying, especially when it’s clear and you can spot familiar landmarks. I was even able to see my home as we flew over Warrington, a small coastal village north of Dunedin. Before long a wave of cloud smothered all but the highest mountains of the Southern Alps and with only a few glimpses of the land below I quickly fell asleep. You knew you were close to Wellington when you could see wind turbines on the hills below. It took just over an hour and a half to travel over 600 kilometres in the ATR aircraft and it made me think about the technology that allows us to travel so easily. This week you will discover more about a different kind of technology which is being used to make our travel on roads safer and more sustainable.

The capital of cool

Once you had collected your luggage you made your way to a rental car to travel into the centre of Wellington city. It didn’t take long before you had to slow down as traffic built up and it made me appreciate the need to use technology to try and make our roads less congested.

You had time to explore the world’s ‘coolest little capital’. Wellington is famous for its restaurants, shopping, arts and scenery and it was easy to see why as you walked along the water front and enjoyed a scrummy lunch in a busy café. It was motivating to see so many people out and about jogging, biking and even swimming in the harbour. You were able to take in the sights and even watched some local talent as a busker on a unicycle juggled his hat and two fire torches!

After wandering around the streets of Wellington you headed back to the car to travel out to Johnsonville where you will be based for the week. You made it on to the motorway and eventually started to see signs of construction on New Zealand’s first smart motorway. This section of highway between Ngauranga and Aotea Quay carries around 90,000 vehicles every day, and it the busiest section of road outside of Auckland. $50 million is being spent on transforming the old motorway into a smart motorway. This 18 month upgrade will make journey times more reliable, and improve road safety.

What makes a motorway smart?

You might be wondering what exactly a smart motorway is; a smart motorway is one that is monitored and managed by traffic operators through a network of sensors, cameras, and speed and lane control signs. Once the project is finished, lane control signs and speed limits will be controlled by the Wellington Traffic Operations Centre which you will see on Thursday. Of course all this technology relies on drivers following the speed limits and knowing what the control signs mean. On Wednesday you will see how drivers are being taught about how to use this new motorway.

While driving to Johnsonville I started to wonder about the benefits of the smart motorway and how else we could improve the safety and sustainability of our roads – you probably have lots of ideas of your own. Alvin and I liked the idea of not only having smart motorways but also having smart cars that drive themselves and never break the road rules! Who knows what might happen in the future but at least this week you will get a glimpse of what’s possible.

See you out on the smart motorway construction site tomorrow. 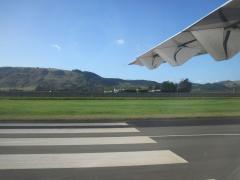 It was cool and clear as you left Dunedin airport this morning. What distance will you be flying today? Image: LEARNZ. 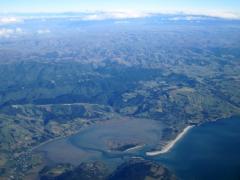 I was able to see home as we flew over Warrington, north of Dunedin. Image: LEARNZ. 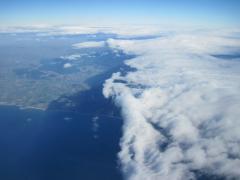 A wave of cloud smothered the country and only the highest peaks of the Southern Alps were visible above the cloud. Image: LEARNZ. 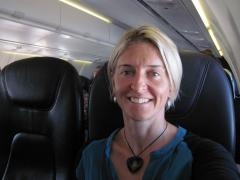 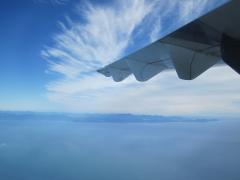 The cloud cleared just as you flew over Cook Strait. If you were to travel from Dunedin to Wellington by car and boat, how long do you think it would take? Image: LEARNZ. 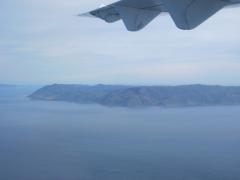 You could see wind turbines on the hills near Wellington as we approached the North Island. Image: LEARNZ. 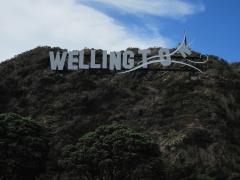 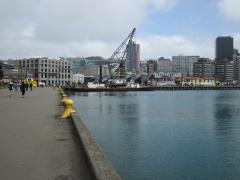 You were able to enjoy a wander along Wellington's waterfront. Image: LEARNZ 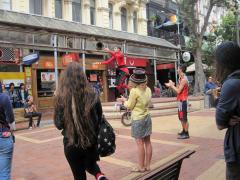 There is never a dull moment in Wellington. I hope you enjoyed watching this busker juggling fire torches and his hat while balancing on a unicycle. Image: LEARNZ. 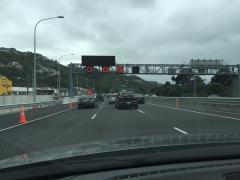 While driving to Johnsonville you could see the electronic signs that are part of the new smart motorway. How do these signs work? Image: LEARNZ.