Today is officially the first day of autumn and you may have noticed a chill in the air. Despite the cooler weather you were no doubt keen to make the most of your time in Wellington. You began the day by meeting the Mayor of Wellington, Celia Wade Brown. Celia is very interested in the smart motorway and was keen to welcome you to the “wonderful city of Wellington”.

It’s not just about the motorway

Celia talked about some of the benefits of the new smart motorway and you may have been surprised to find out that it wasn’t just about reducing congestion on the road. The smart motorway will also help reduce the amount of traffic on other roads. By making the motorway more efficient more cars will be able to travel on it rather than smaller local roads. This will make these other roads safer for not only drivers but also pedestrians and cyclists. Celia explained that the technology used on the smart motorway means that the road can be improved without having to build a new one. She also talked about the need to look at the way we use our roads. We all need to think about reducing our use of resources which means that we share transport, take the bus, walk or bike when we can so that the number of cars on the road doesn’t increase too rapidly. You can find out more by watching the video.

Once you had completed the audioconference you caught up with Glen Prince who you may remember from the first Smart Motorways field trip in August 2015. Glen talked about the progress that has been made since then. You can watch the video about this. It was impressive hearing about all the work that has been done. The new central median barrier is almost complete and after this weekend the last of the new gantries (structures used to display signs) will be in place. The fourth lane will be finished soon and will have a new surface that not only lasts longer, but is also safer and quieter to drive on.

You met Richard Hocken from the Wellington police to find out more about how the smart motorway will help emergency services. Richard talked about how the old motorway had a wide shoulder where vehicles could pull off the road. This space has now been used to create a fourth lane for the smart motorway so technology is being used to manage lane closures if there is an accident. A ramp has also been built just for emergency services. This ramp will allow the police and ambulances to easily get on and off the motorway without having to travel to the nearest turn-off. Richard also expects that the smart motorway will reduce the number of crashes and problems on the road by limiting speed and informing drivers of what’s happening on the road ahead.

Out on the construction site

It was exciting to head out on to the construction site after lunch with Dan Edwards. Dan is a project engineer and he was able to take you out to the central median barrier. You had to wear all your safety gear as you were out in the middle of a busy motorway. Dan showed you the completed concrete barrier and it was neat to see the etchings of iconic Wellington buildings on the barrier. You also saw the new gantries and the clever use of space that has allowed a fourth lane to be created. The fourth lane is due to open in May. I’m sure Wellington drivers are looking forward to this extra space.

Tomorrow you will meet some experts who have been working behind the scenes to help drivers understand how to drive smart on the smart motorway. 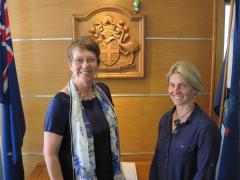 Shelley meets the Mayor of Wellington Celia Wade-Brown, why do you think the Mayor is interested in the smart motorway? Image: LEARNZ. 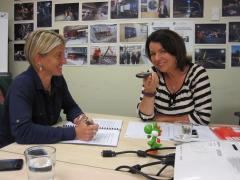 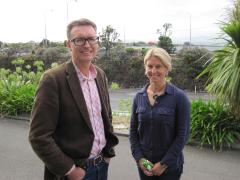 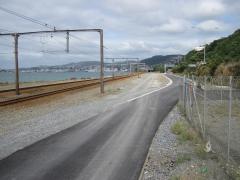 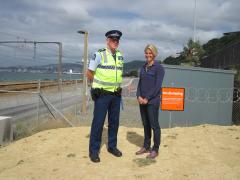 Senior Sergeant Richard Hocken talks to Shelley about how the smart motorway will help them to respond to incidents and also reduce accidents. Image: LEARNZ. 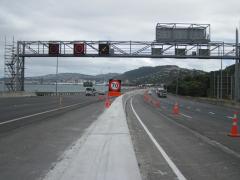 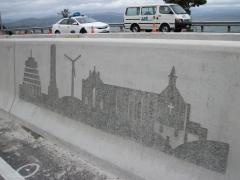 Can you name the buildings which have been etched on to the median barrier? Image: LEARNZ. 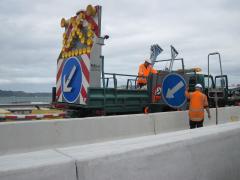 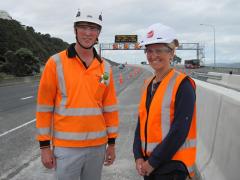 Dan Edwards shows Shelley around the smart motorway construction site. Why do you think safety gear is needed? Image: LEARNZ.