Have you ever wondered what the future of transport in New Zealand might look like? A group of students from Pūtāruru College have been investigating transport and how we might travel more safely in the future. So you went to find out what they have learned.

Pūtāruru is a small town 65 kilometres south east of Hamilton. Despite heavy showers of rain, the drive to Pūtāruru was remarkably easy. You were even able to travel at up to 110 kilometres per hour on a newly completed section of the Waikato Expressway. This four-lane highway has been designed so that it’s not only safer but also easier to drive.

At Pūtāruru College you met with Police Sergeant Murray Hamilton, and students Anthony and Hayden to complete the first web conference. You spoke with students from Papatoetoe East School who wanted to know more about road users and road safety. They had some excellent questions that made everyone think about some of our road rules. One student asked about why buses don’t have seat belts. Murray thought that in the future they probably will because they help reduce injuries during accidents. You can listen to a recording of this web conference to find out more.

Following the web conference, Hayden and Anthony took you over to the media room to meet a group of film students. These students entered the 2017 New Zealand Transport Agency Future Transport Competition. They had spent a lot of time thinking about how to improve our transport system and shared their video entry titled Hayden’s Big Adventure. In this video Hayden travels through time to see how self-driving cars are used in the future. Their video won the competition and if you watch it you can see why. Students interviewed Sergeant Hamilton and completed a lot of research. Together students found out how technology such as self-driving cars and expandable buses could help reduce car accidents and traffic congestion. This video took months to create and relied on a lot of team work. You can find out more by watching the video.

You spoke with students about what they had learned through creating their video. It was interesting to hear that not all students wanted to have self-driving cars. Some students were looking forward to learning to drive themselves. There are plenty of benefits to self-driving cars but there are also some problems. Who is to blame if they cause an accident and how will they react to other cars that are not automated? You can watch the videos to find out more.

After lunch you headed outside to brave the wet, wintery weather to investigate road safety issues around Pūtāruru College. Students came up with ways to identify issues. Methods such as surveying locals, counting cars, measuring car speeds, and observing drivers helped to give students ideas about how road safety in the area could be improved. Sergeant Hamilton showed you how to use a hand-held speed detection device. This device uses laser light to measure the distance from the device to the car and is used to calculate speed. The faster vehicles travel the more harm they can cause if there is an accident, so it’s important for drivers to keep to speed limits. You can watch the video to find out more about how to identify road safety issues in your own area.

As you drove back to Hamilton you had time to think about all that you have learned. I began to imagine how people might travel to Hamilton in fifty years’ time. I wonder if people will even need to learn how to drive?

Tomorrow you will meet with experts who have helped design the Waikato Expressway and see how technology is being used to build safer roads.

See you in the morning. 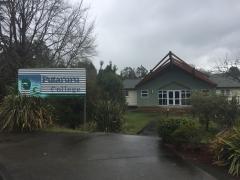 Welcome to Pūtāruru College. This college has about 400 students and is 65 kilometres south east of Hamilton. Image: LEARNZ. 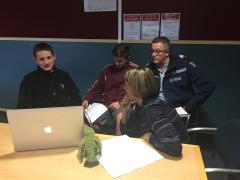 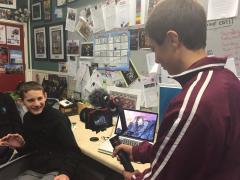 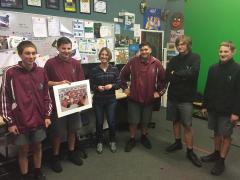 Some of the members of the PC Film Group who put together the winning film entry in the NZTA Future Transport Competition. Image: LEARNZ. 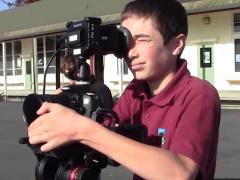 Matthew was one of the students who filmed Hayden's Big Adventure. Image: PC film group. 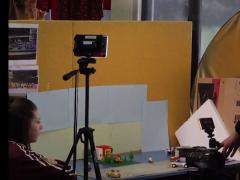 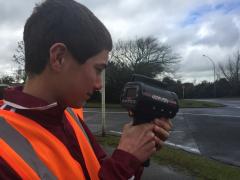