To book as a speaking school, email Shelley the LEARNZ Teacher shelley.hersey@core-ed.org.

Questions from the Thomson Twins, Year 4 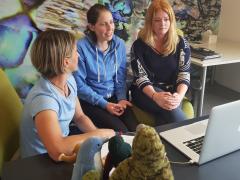 Speak to experts and ask your questions live during the field trip by booking a web conference. Image: LEARNZ.