The motion of the ocean changed overnight and you woke to rougher seas, with white caps decorating the surface. Now the boat is moving sideways rather than just up and down but that doesn’t seem to be bothering me as much. Maybe I am finally starting to get my sea legs.

You heard interesting questions from Weston School and Scots College during the audioconference this morning. It was interesting to hear from Phil Sutton that Argo Floats can be programmed to work in areas where sea ice forms. The Argo Float will only try to reach the surface if the water temperature is high enough that ice will not form. This means the Argo will keep cycling down and up storing its data for up to a year if ice prevents it from getting to the surface. You can listen to the audioconference to find out more.

Part way through the night the boat slowed down so that an Argo Float could be deployed. It was later than expected because RV Tangaroa had been battling against, not only the Northerly head wind but also the East Coast current slowing the boat down. The instruments which Roger the Captain uses tell him how many knots the boat is travelling at and the expected time of arrival at our destination. It is hard to believe we are only travelling at 11 knots. You can find out how fast this is in kilometres per hour by multiplying knots by 1.85.

Preparing to test the CTD

Once the first Argo Float has been deployed a CTD is also deployed. A CTD is used to calibrate the floats. To make sure Argo Floats collect and send accurate data, scientists will take their own measurements of temperature and salinity and compare them with the data sent from the Argo Float. To take these measurements, a test CTD will be lowered from the ship on a long cable to collect temperature and salinity data and check that the CTD instrument is working correctly.

CTD stands for connectivity, temperature and depth. Connectivity is used to measure salinity because the more salt in the water the better the water will conduct electricity. Temperature is measured by digital sensors and water depth is found by measuring the pressure. Greater pressure means deeper water. A CTD is basically an instrument made up of lots of bottles which will collect samples. Each of the sampling bottles opens and closes at specified depths to collect a small sample of sea water.

Triggering the lids on the CTD

The ambassadors enjoyed having a close look at the CTD as it was prepared for its journey towards the sea floor. It was interesting to see how the lids on the bottles are operated by a signal sent from the boat to the electromagnet which triggers and the lid closes. The bottles are left open before deployment and then closed at certain depths. Each bottle collects a different sample.

It took quite some time to get the CTD up and running and its launch was delayed by rough seas. When the new Deep Argo floats are deployed it is important to know that if something is not working correctly they can still be retrieved. It is not possible to deploy them if the sea becomes too rough as it would not be safe trying to get them back.

Nathalie talked to you about the Argo Floats and why you were not able to see one. Both the regular and Deep Argo Floats have been put into boxes so they can be deployed without damaging the fragile antennae which will send the data much like a cell phone. The box quickly breaks down so does not harm the environment. You can watch the video to find out more.

After much anticipation the CTD was finally lowered into the water where it travelled at a metre per second to a depth of over 2,000 metres. A few hours later it was brought to the surface but things had not gone according to plan, none of the lids had fired so no water was collected. The scientists will have a bit of work to do to fix the problem but you can see why it’s important to test these things!

Hopefully if the weather isn’t too bad tomorrow you will be able to deploy two Deep Argo Floats. 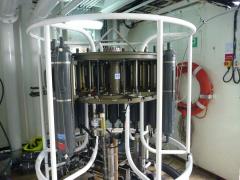 The CTD is put together on board RV Tangaroa. Can you see the large sampling bottles? 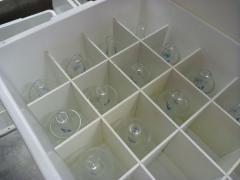 Once the CTD comes back up from 2,000 metres the seawater samples it collects will be analysed. These bottles are used to find out the amount of dissolved oxygen in the seawater. 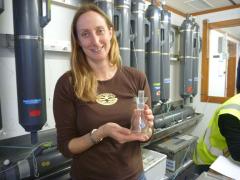 Esme shows you a bottle that has just been cleaned ready to take an oxygen sample from the water. Why do you think it would be important to complete this analysis quickly? 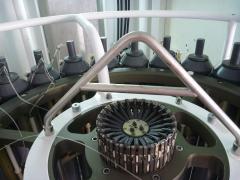 The lids of the bottles on the CTD need to be opened before the CTD is lowered into the ocean; why do you think this is? 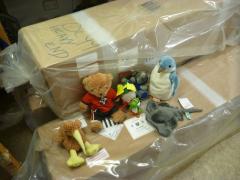 The ambassadors find out more about Argo Floats.  Why do you think they have been put into these boxes before deployment? 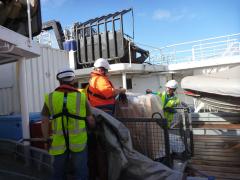 The Deep Argo floats have been boxed up and are sitting on deck. Watch the video to find out why they have been put out here. 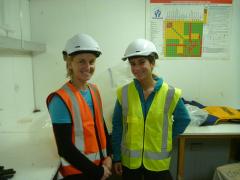 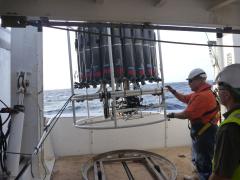 After working on the CTD for much of the day the scientists are ready to deploy it. If the CTD needs to be lowered to a depth of 2,000m how long will the winch cable need to be?