RV Tangaroa Speed 1.2 knots (we have reached our destination)

You have finally reached your destination North-East of New Zealand and despite the cloudy weather the wind has dropped and the sea is calmer. For the next few days you will be working with the scientists to capture data on sea temperature, salinity and depth using a CTD and Argo Floats.

Phil Sutton from NIWA has helped organise this trip and he explained why you had to travel so far from New Zealand. Looking at an undersea map of the country it is easy to see where the deep water lies off the continental shelf. You are quite close to the Kermadec Trench in a place where there are no strong sea currents or seafloor obstacles so it is the perfect place to deploy Argo Floats, especially deep water ones.

Scientists are really interested in what is happening to the sea below 5,000m because they don’t have a lot of information on it. They are looking at where the excess heat energy is going. As air temperatures increase due to climate change the ocean temperature also increases but not all the heat is accounted for. If extra heat is taken up deep in the ocean it will change all the layers of the ocean and the way it circulates, which could impact on marine food chains and climate. You can watch the video to find out more.

Samples from the CTD

After a lot of problem solving and team work the scientists worked out why the CTD didn’t work properly yesterday. The cable which sends a signal to trigger the lids to close failed, so this was fixed and the CTD was lowered to over 5,000m below the surface. Over the next few hours the CTD was brought back up to collect samples at specific depths. Two bottles are used to collect samples at each height so if one bottle fails a sample will still be captured by the other bottle. It was really exciting seeing the CTD unit winched up out of the ocean with all its precious samples on board.

You have all been waiting patiently to deploy the new Deep Argo Float and this afternoon your wait was over. The float was taken out of its box and tests were completed to make sure it was receiving and sending messages. Everyone gathered around excitedly to watch the float being deployed. These floats don’t need to be put in boxes to protect the aerial they just need to be carefully lowered by winch into the water. The deployment went off without a hitch and you could see the bright orange Argo bob in the water and then disappear from view. You will see some of the data from these floats later during the trip.

Out of the box

The regular Argo didn’t behave quite so well when it was deployed. The water release mechanism which is normally activated when it hits water did not work. The box wasn’t released from the webbing that bound it. This webbing allows the Argo to be lowered over the side of the ship but it needs to release so the Argo can fall out of the box. The Argo had to be pulled back onto the boat and deployed without the box. The winch cable was used in the same way as it was for the Deep Argo and everyone held their breath nervously hoping the Argo would not be knocked against the boat. Thankfully it worked and the Argo was on its way undamaged. Watch the video about this.

It has been a busy and successful day and I think everyone has earned a rest so we will see you back on deck tomorrow. 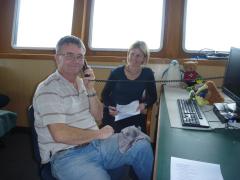 Phil Sutton answers questions from Mount Somers Springburn School on a satellite phone during the audioconference this morning. 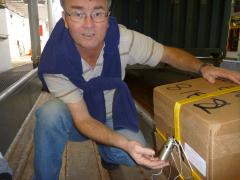 Phil shows you a water release mechanism; what are these used for during Argo deployment? 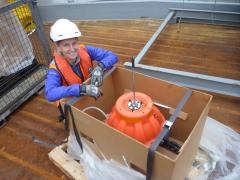 Shelley takes a look at a Deep Argo Float, how are these different from regular floats? 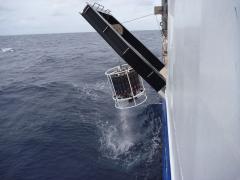 The CTD is brought back up to the surface and onto RV Tangaroa by winch. What is a CTD used for? 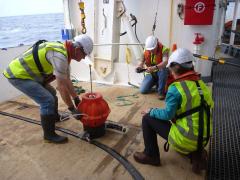 The Deep Argo is ready for deployment. How far down below the surface will this float go? 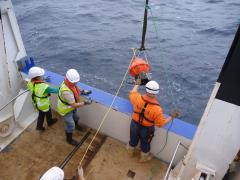 The Deep Argo is carefully lowered into the water. Which part of these floats is fragile? 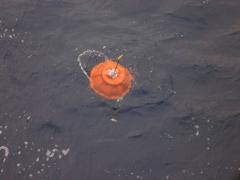 The Deep Argo is successfully deployed and ready to begin collecting data. Why do scientists want to know about the temperature and salinity of deep ocean water? 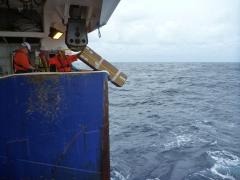 The regular Argo is deployed in its box. Why is this? 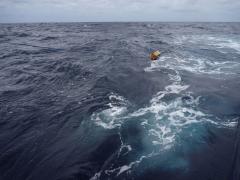 The water release didn’t work and the Argo was not released. The box had to be dragged back on to the boat. How do water release mechanisms work? 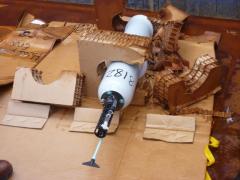 The Argo is taken out of its box and lowered into the water by winch.