Your mission for today was to find out more about earthquakes and tsunami in the Marlborough region so Rob took you out to Lake Grassmere south of Blenheim. Lake Grassmere looked stunning in the early morning autumn sunshine and it was hard to imagine such a peaceful place shaking in a large earthquake as it did back in 2013.

This area was hit by a 6.5 magnitude earthquake which was centred in Cook Strait, around 20 kilometres east of the town of Seddon. The earthquake struck at 5:09pm on 21 July 2013 at a depth of 17 kilometres. The quake caused moderate damage in the wider Marlborough area and Wellington, north of the epicentre. Luckily only minor injuries were reported. Several aftershocks occurred in the next few days making people in Marlborough and Wellington nervous. Then on 16 August another major earthquake hit. This earthquake measured 6.6 in magnitude and was centred under Lake Grassmere.

The Lake Grassmere earthquake occurred at 2.31pm on a Friday afternoon. The epicentre was located right underneath Lake Grassmere, at a depth of 8km. The earthquake caused significant land damage in the local area, with landslips blocking roads, including the main highway between Blenheim and Christchurch. Buildings in Seddon were damaged, with some having to be demolished. The earthquake was widely felt in both the North and South Islands of New Zealand and is considered part of the earthquake sequence that started in the Cook Strait.

Why some earthquakes are more damaging than others

These earthquakes were larger than the 2011 Christchurch earthquake. But the ground accelerations felt in Christchurch were about ten times as strong as those felt in Marlborough and Wellington so these Cook Strait earthquakes were much less damaging. Rob explained that the severe shaking in Christchurch in 2011 was a result of the epicentre being so close to the city. Other factors also affect how much the ground shakes such as the type of fault and how shock waves travel through the ground. Soft ground such as sand shakes more than solid rock.

From Lake Grassmere you headed back towards Blenheim and stopped off at Big Lagoon. This area is interesting as geologists have discovered that tsunami have occurred here in the past. Evidence has been found of a settlement of people living in the area before the local iwi arrived. It is thought that this settlement was destroyed by an 8 metre high tsunami about 700 years ago. Faults off the Marlborough Coast and east of the lower North Island could rupture in a large earthquake and cause a tsunami. So it’s important for people living in this area to know what to do if they feel a strong earthquake or see the ocean retreat suddenly.

Before heading back to Blenheim Rob showed you a trench that some GNS geologists had dug to find out more about the Vernon Fault. This trench shows how different layers of soil and gravels have been moved by earthquakes. These layers can be radio-carbon dated so that the date of past earthquakes can be found. By dating past earthquakes geologists can work out the length of time between earthquakes and therefore when we can expect another earthquake on a particular fault. You can find out more in the video.

It was then time to talk to Christian Renewal School and Greytown School in our audioconferences and they had some challenging questions about geohazards. You can listen to the recordings of these audioconferences.

Your last stop before heading to Nelson was north of Blenheim in the Wairau Valley. Rob pointed out the fault scarp of the Wairau Fault which is at the north eastern end of the Alpine Fault. This fault last ruptured about 1800 years ago. Rob told you about how geologists know how big a future earthquake will be by looking at how much the ground moved in past earthquakes. This fault moved about 4-5 metres during the last earthquake and this would generate an earthquake with a magnitude around 7. The movement of land can be measured. Around the Wairau fault land is moving about 4mm every year which isn’t that much so it takes a long time for the strain to build up. It is this strain that will eventually be released in an earthquake. The Wairau Fault is expected to rupture about every 2000 years. Around the Alpine Fault land is moving at 27mm per year so it has earthquakes about every 300-400 years.

It is amazing how much geologists know about earthquakes, but it is still impossible to predict when an earthquake will occur. I guess this is why it is so important for us all to be prepared for earthquakes at any time.

Tomorrow you will be exploring geohazards in Nelson. 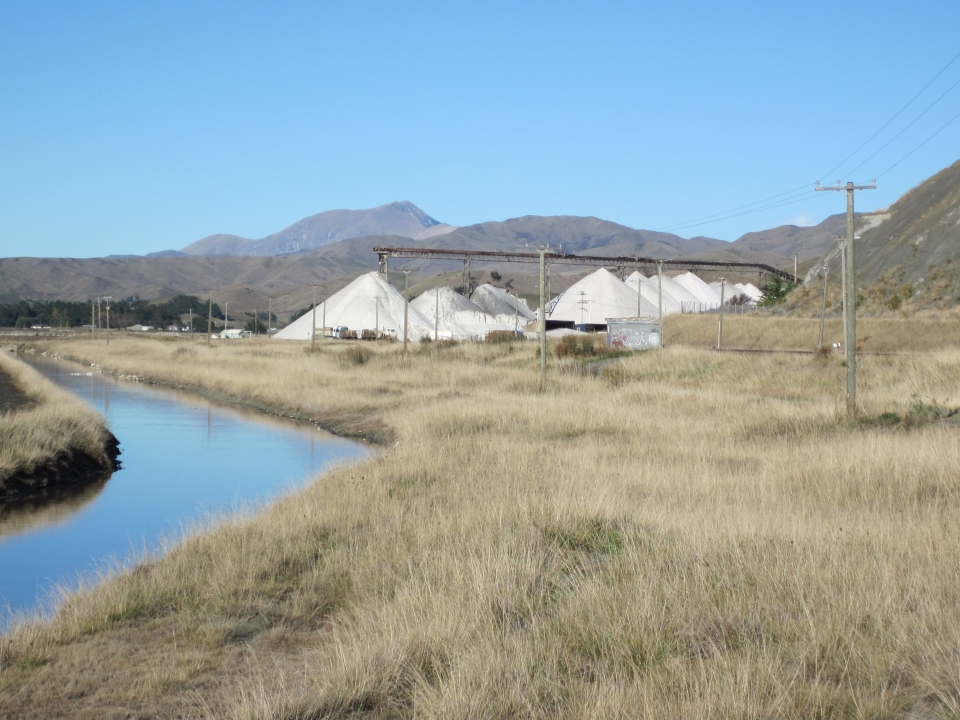 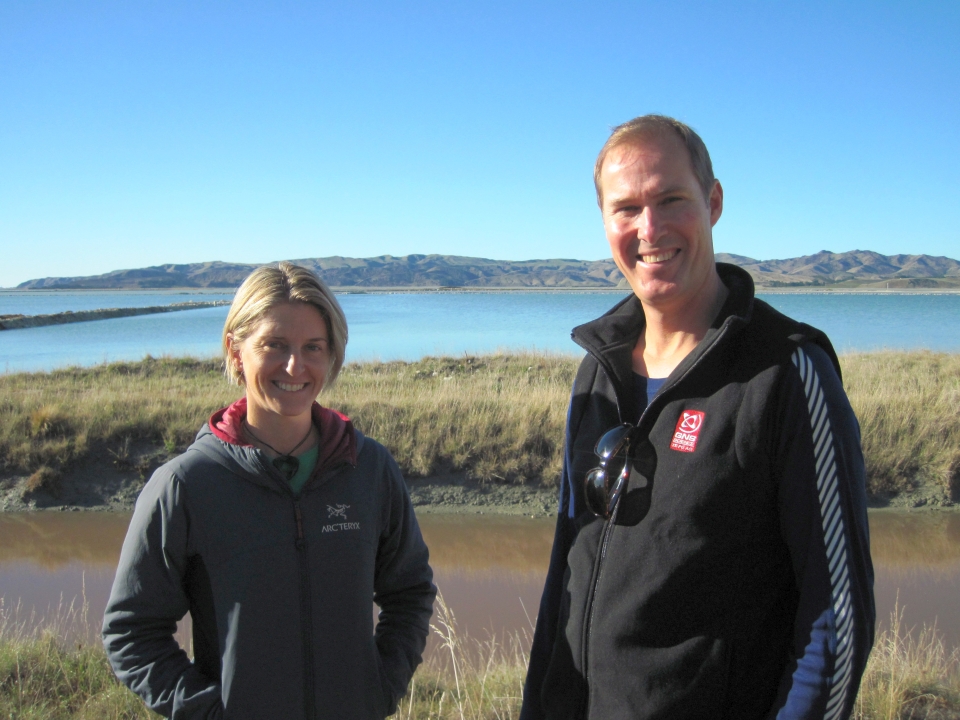 Shelley and Rob take a look around Lake Grassmere where a magnitude 6.6 earthquake struck in 2013. What impacts did this earthquake have? Image: LEARNZ. 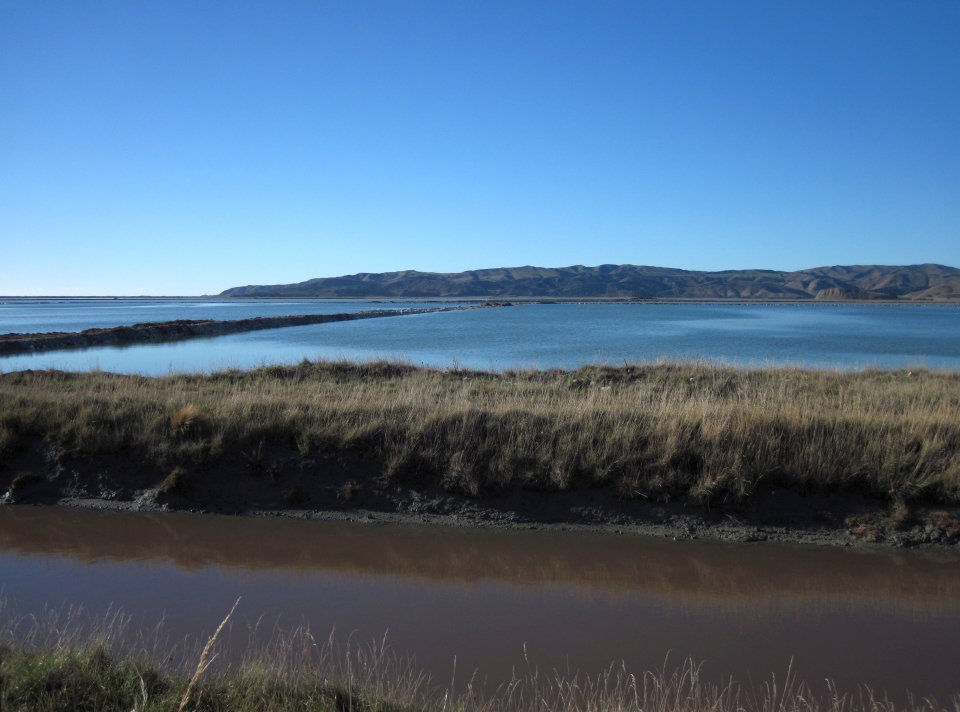 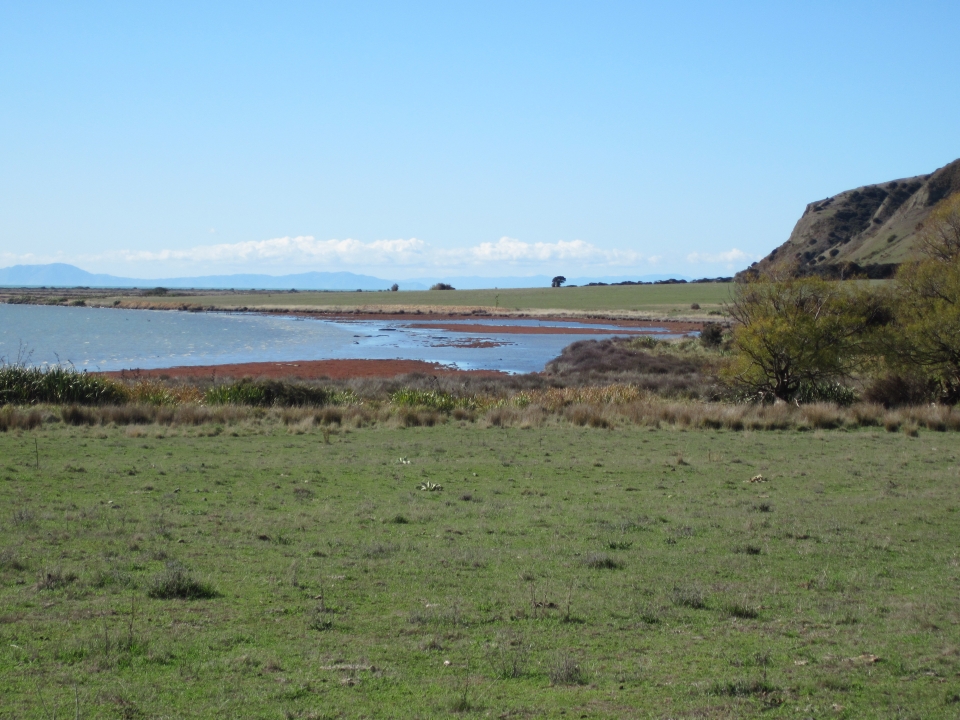 Big Lagoon on the East Coast near Blenheim has been hit by tsunami in the past. How do you think scientists know this? Image: LEARNZ. 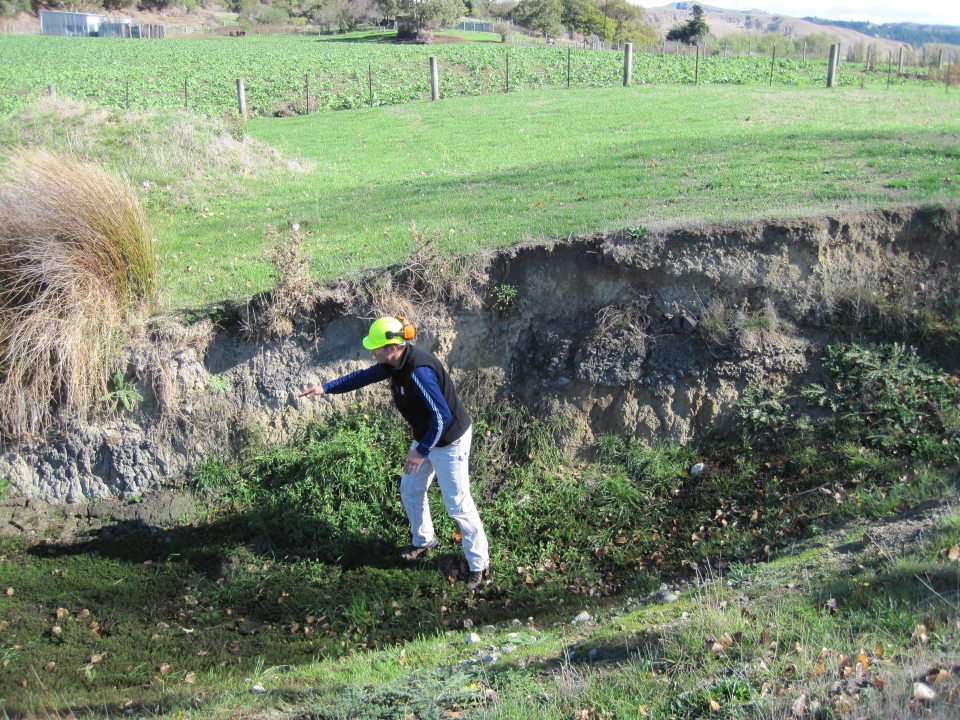 Rob shows you where geologists have dug a trench across the Vernon Fault beside Big Lagoon. What can a geologist find out from a trench like this? Image: LEARNZ. 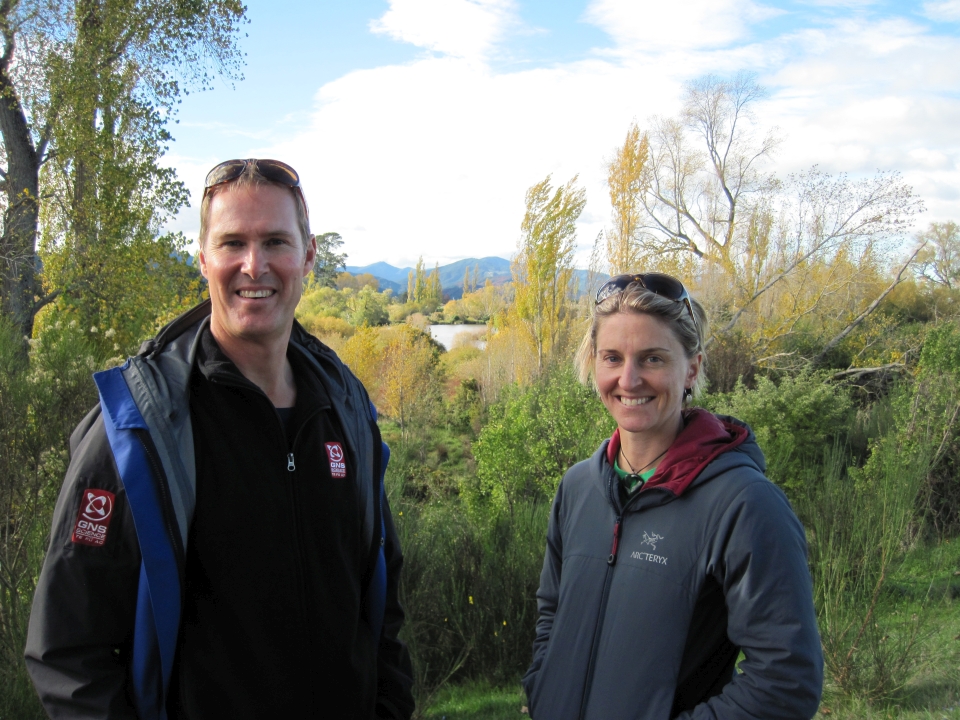 Rob and Shelley stand above the Wairau Fault north of Blenheim. This fault last ruptured 1800 years ago; how do geologists know this? Image: LEARNZ. 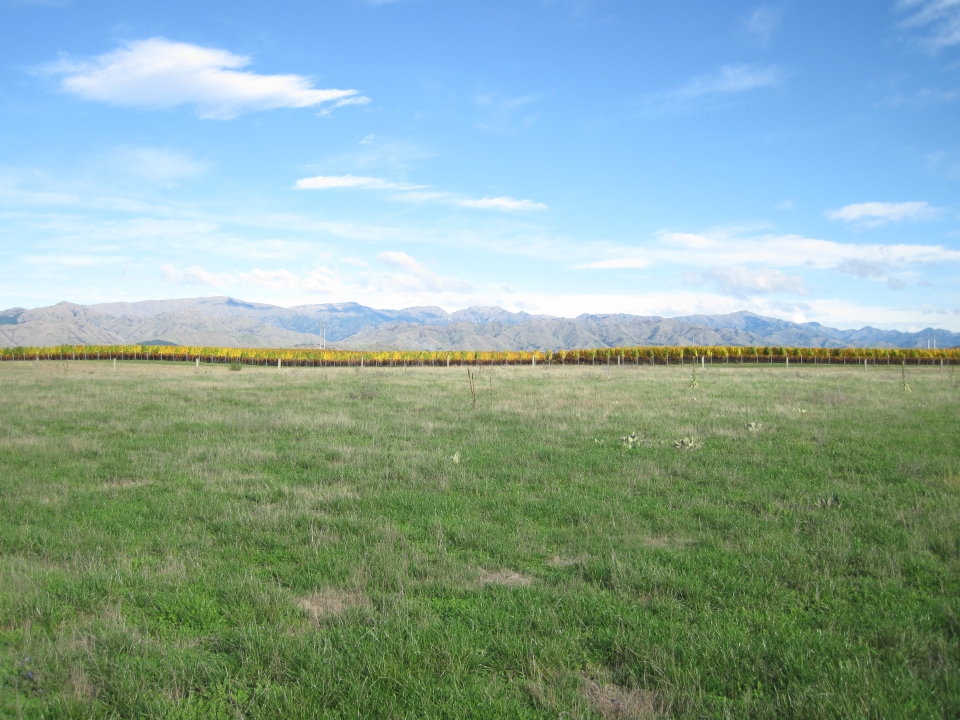 Marlborough has many vineyards for wine making. How do you think geohazards would affect this industry? Image: LEARNZ. 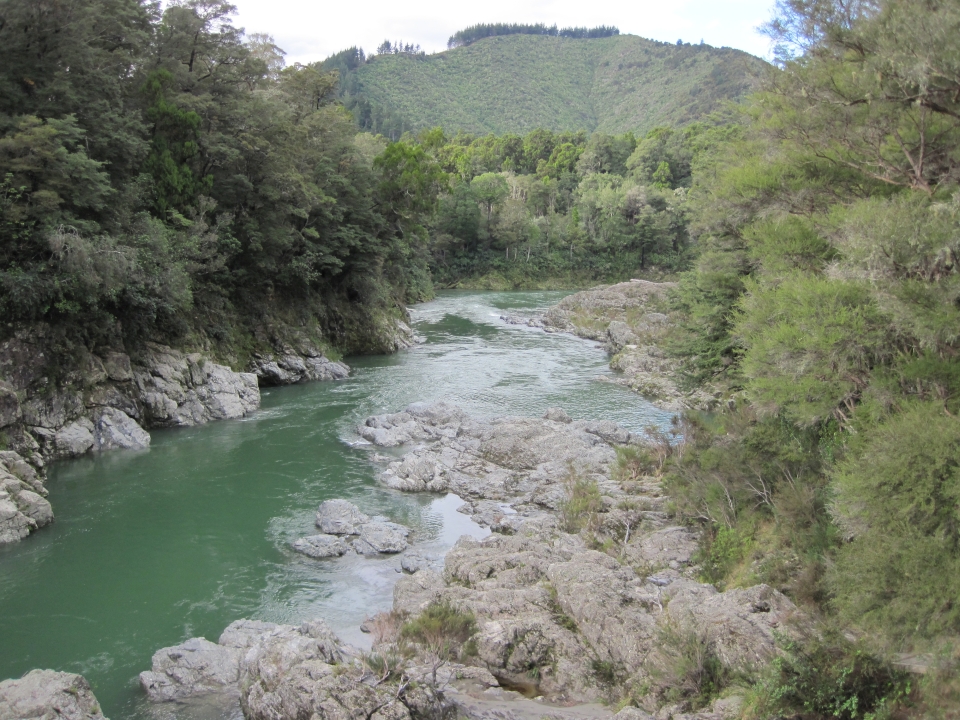 Heading north back across the Pelorus River. How much do you think this river has dropped since the level you saw on Monday? Image: LEARNZ.