Before the tunnel can be built a lot of work must be done to design a safe tunnel, prepare the site, and relocate underground service pipes that are in the way.

The tunnel is being constructed as a concrete box in a trench and is known as a “cut and cover” project. It is not being burrowed through rock.

A 300 metre long trench has been dug into Buckle Street. This trench is 18 metres wide and at its deepest point is 12m at the sides for drainage and 10m through the middle.

It will take at least 4,200 truck and trailer loads to take the soil away. That is a lot of soil – 38,000 cubic metres. This soil is taken to a contractor’s landfill from where it can be used in other projects.

Many pipes carrying gas, water, telecommunications and electricity services to homes and businesses are buried in the ground. Other pipes take rainwater to the sea and sewage away to treatment plants. These services had to be moved out of the way so the trench could be dug for the new tunnel and road.

Using a digger risks breaking the pipes which would stop important services from reaching the city. To avoid damaging the pipes, water was sprayed into the soil to make it slushy and a giant vacuum cleaner on a truck sucked it up from around the pipes and took it away.

One thing that will not be moved is the 100 year-old sewer that is underneath Tory and Buckle Streets. The sewer, which is made of bricks and is nearly a metre high, will come very close to the road and tunnel at one point, so extra care is being taken to protect it.

The Alliance team knows that earthquakes in the past lifted up the land in Wellington several times. The biggest earthquake turned the Basin Lake into a swamp in 1855 and the settlers then made it into the Basin Reserve cricket ground.

The engineers are designing the tunnel, which will be more than 120 metres long, to make it safe from earthquakes.  It will be anchored to concrete posts that will go down a minimum of 10 metres and a maximum of 30 metres, depending on the depth of the bedrock. Posts used in this way are called piles. At first the engineers were going to use straight piles but they have now decided it is better to pour concrete piles that have a bell-shape at the bottom. They have conducted tests on the soil in the trench to see how well different types of piles stay in place under the sort of pressure a major earthquake would put on them. The bell-shape works best for the Memorial Park trench and is designed to withstand a 1-in-2,500 year earthquake.

The engineers are also making plans in case there are any accidents or car breakdowns in the tunnel. Closed circuit cameras will keep an eye on what is happening - 24 hours a day, seven days a week - and alert emergency services if anything goes wrong.

The trench for the tunnel and the road that will run down into it is being held in place by retaining walls made from steel kingposts with timber poles slotted in between. The wall protects the workers and keeps the soil in place while the tunnel and road are being built. A wall of interlocking steel sheet posts protects the foundations of the historic Mount Cook Police Barracks and the apartment building nearby.

Keeping safe is important on the work site, especially when there are several cranes, diggers and loaders moving around where people are working.  The Memorial Park Alliance employs a safety manager who makes sure everyone knows how to work safely around machinery. 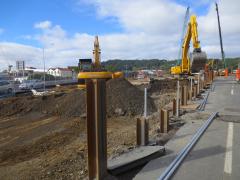 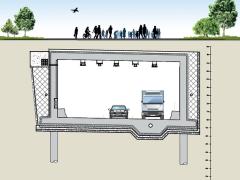 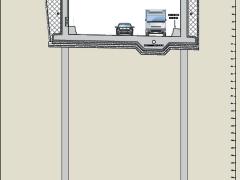 Discuss the challenges in completing Memorial Park and how these challenges will be managed.