The day you have all been waiting for has finally arrived. Today you and the ambassadors began the Memorial Park field trip to Wellington. Luckily you could enjoy a leisurely sleep in as the flight from Dunedin to Wellington wasn’t until 11.20am. On this field trip you will be learning all about a roading project, but it isn’t your average roading project; The Memorial Park project will provide a National War Memorial Park where people can come together and remember all those who have served at war.

To get to the airport you had to drive south from Dunedin along State Highway 1. This highway runs the entire length of New Zealand. You will be looking at a very small section of this highway in Wellington where Buckle Street will be put underground so Memorial Park can be built on top. Interestingly New Zealand has 11,000 kilometres of State highways and they are one of our most valuable assets, worth a massive 23 billion dollars. You can find out more by reading the background pages.

You made it to the airport in plenty of time to catch the direct flight through to the capital city. The ambassadors were looking forward to exploring Wellington. They had read a tourist brochure that described the city as the capital of cool because it is home to Parliament, the Museum of New Zealand Te Papa, a thriving film industry, and heaps of other cool stuff. Unfortunately cloud hung low over much of the South Island so you didn’t get much of a view during the flight north, catching only a glimpse of the North Island as you descended into Wellington. The ambassadors were ready for a bumpy landing in ‘Windy Wellington’ but today the city didn’t live up to its nickname and you were able to land smoothly.

A bit of Wellington History

The earliest Māori name for Wellington is Te Upoko o te Ika a Māui - which means ‘the head of Māui's fish’. This comes from the Māori legend that polynesian navigator Māui fished up the North Island. Early tribes include Ngāi Tara, Rangitāne and Ngāti Mamoe. Chief Te Rauparaha, of the Ngāti Toa people, invaded in the 1820s and took Kapiti Island. Later, Taranaki tribes including Te Āti Awa moved south and became Wellington’s tangata whenua (people of the land).

Located in the middle of the country, Wellington has always been well placed for trade. Way back in 1839 it was chosen as the first major planned settlement for British people coming to New Zealand, and several ships arrived here in 1840. A business district soon grew around the harbour, which then became a busy port. Since then Wellington has continued to flourish. In 1865 it was made the capital city.

After a short bus ride into town you could explore the city. You were surrounded by tall buildings as you walked along the busy main street of Wellington towards Parliament. These high-rise buildings now make it hard to see the National War Memorial from central Wellington. You may have seen the Beehive on TV but how many of you have actually been to see it? This building is the executive wing of the Parliament Buildings and it has ten stories and four floors underground. It wasn’t hard to see its resemblance to a real beehive and the ambassadors wondered if the people working inside are as busy as bees in a hive. Close to Parliament is another war memorial; the Wellington cenotaph, like the National War Memorial it is also undergoing a makeover to restore it and create a ceremonial space.

Hemmed in by hills, Wellington city sits on a spectacular harbour. You were able to enjoy wandering alongside the water’s edge in the warmth of an unusually calm Wellington afternoon. You can see this in the panorama. There are so many things to see around the waterfront. Sculptures, monuments and lots of other interesting things can be found here. You can even read phrases from well-known writers and poets on plaques around the area.

You have had a busy travel day. It’s time for a rest so you will be ready to discover what is going on at the Memorial Park construction site tomorrow. Don’t forget your high-vis vest and your hard hat. 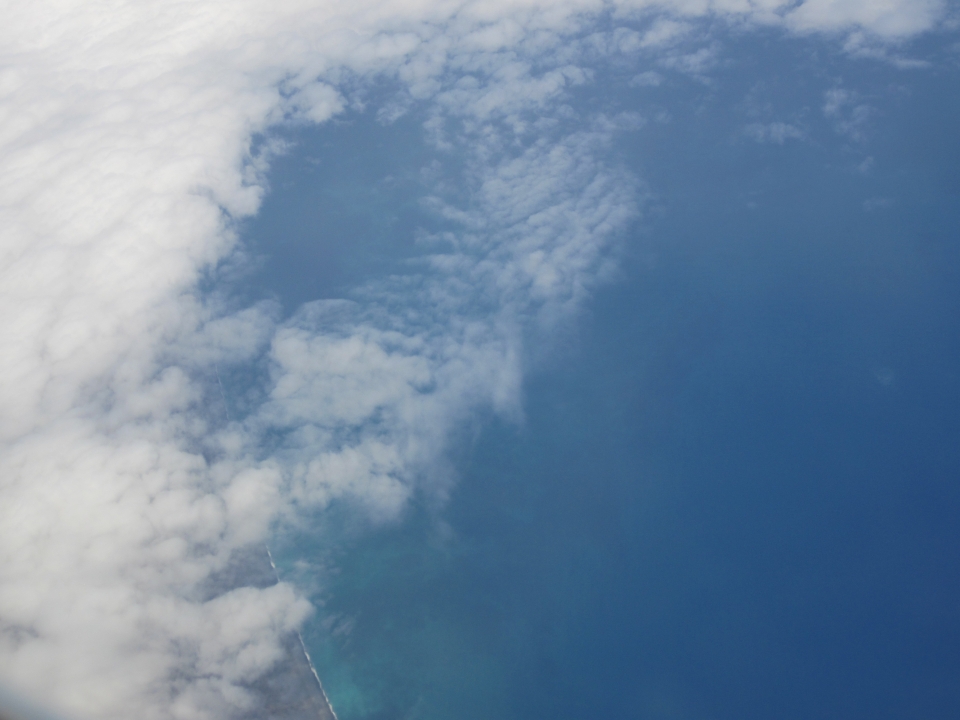 You couldn't see much as you flew north to Wellington today as cloud covered most of the South Island. Image: LEARNZ. 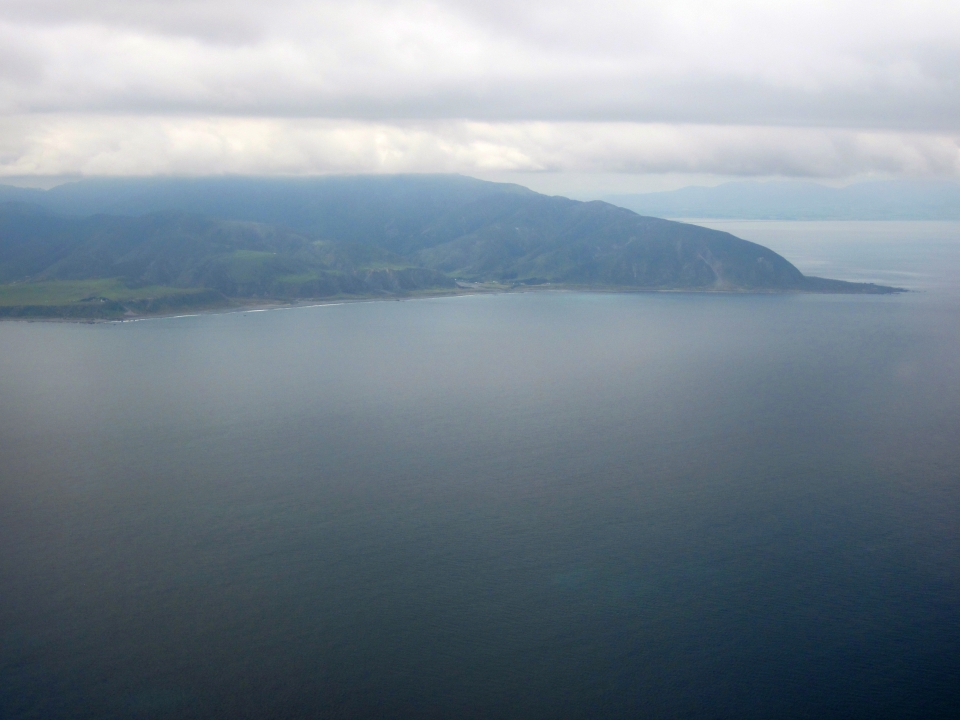 This was your first glimpse of the North Island just before landing at Wellington Airport. Image: LEARNZ. 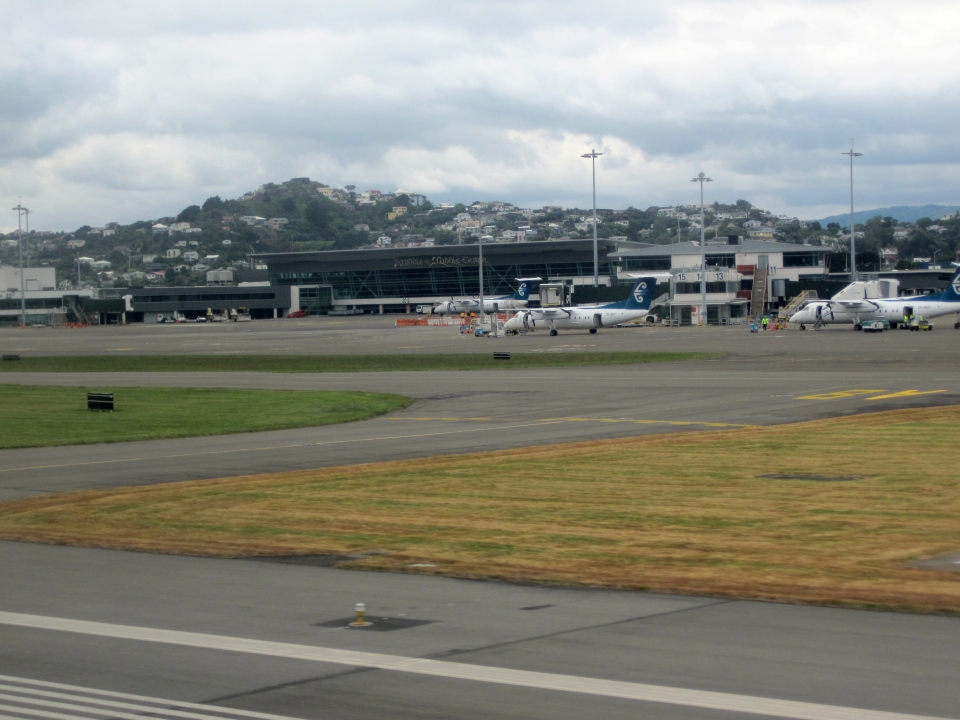 Coming in to land at Wellington Airport in calm conditions. Image: LEARNZ. 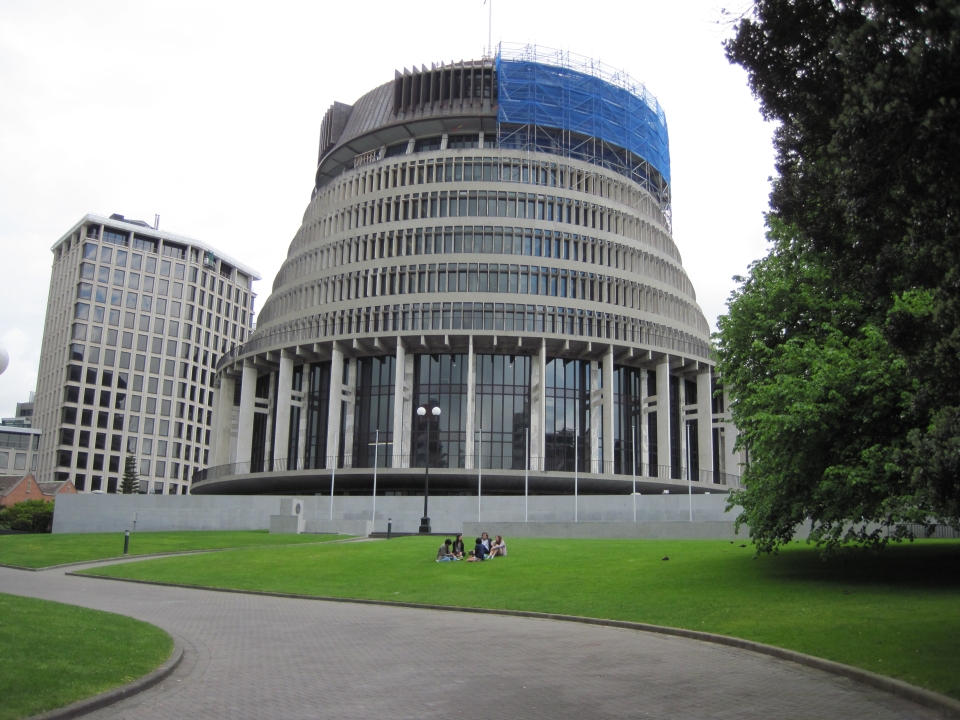 The Beehive is the executive wing of the Parliament Buildings in Wellington where the New Zealand Government is based. Image: LEARNZ. 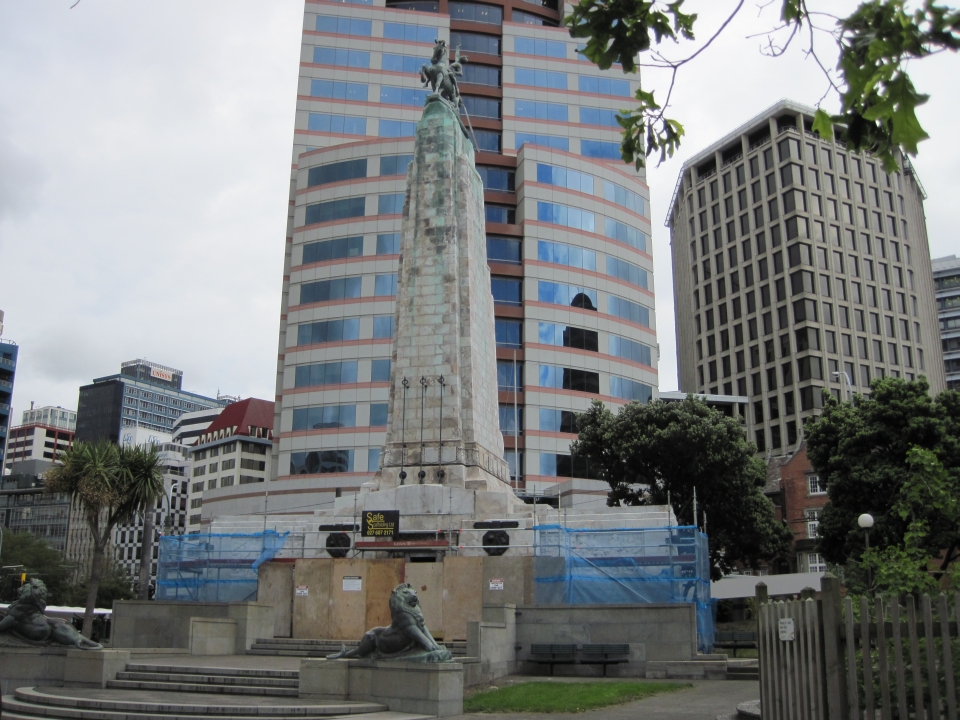 The Wellington cenotaph remembers those who died in both the First and Second World Wars. Image: LEARNZ. 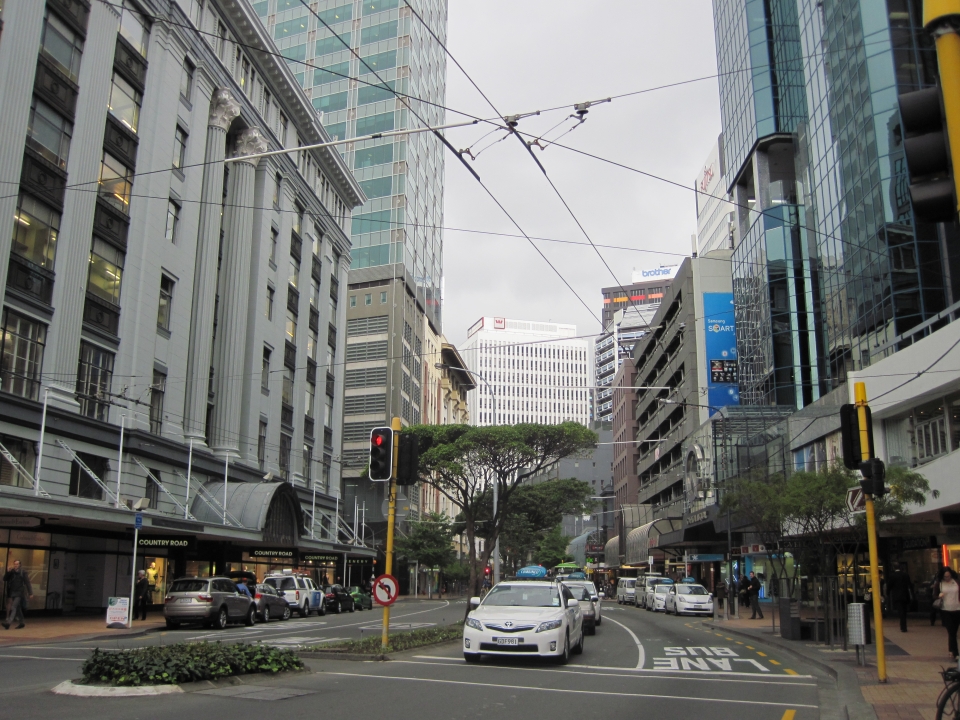 High-rise buildings in the centre of Wellington block the view of the National War Memorial. Image: LEARNZ. 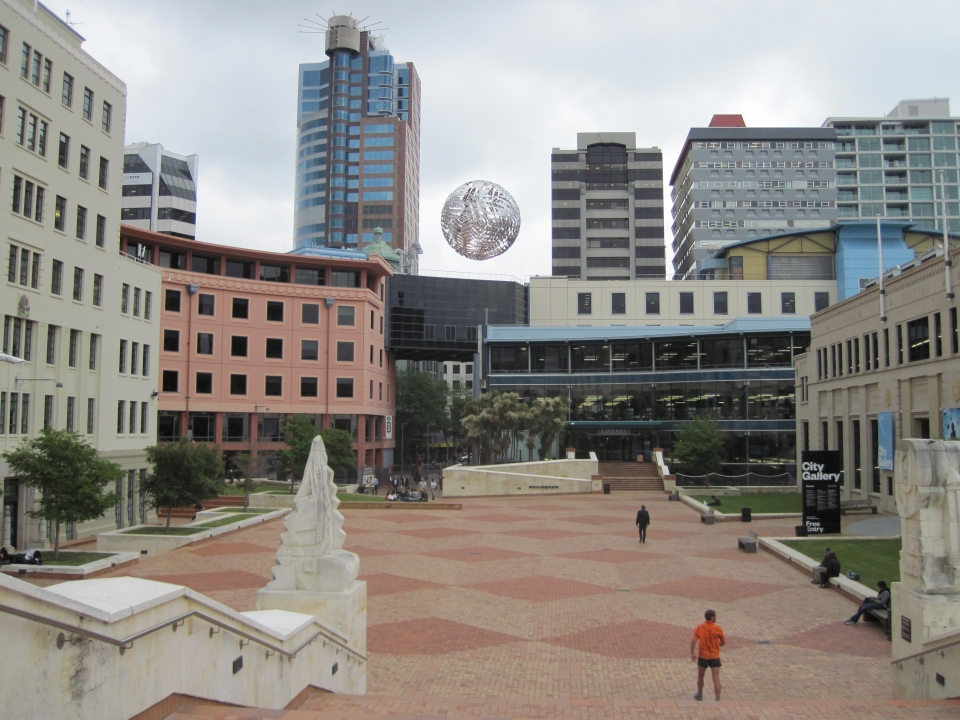 The Civic Centre on the Wellington waterfront is a great place to explore with lots of art, sculptures and monuments. Image: LEARNZ. 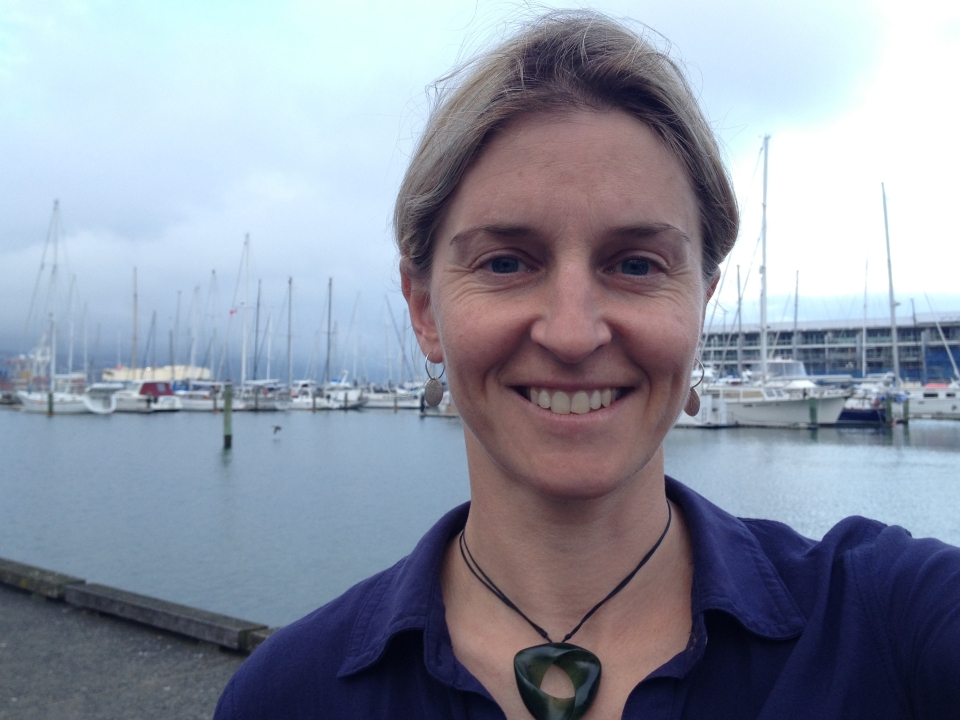 The 'Solace in the Wind' sculpture by Max Patte is one of many art pieces visible on Wellington's waterfront. Image: LEARNZ. A ferry makes its way into the calm waters of Wellington Harbour. Image: LEARNZ.