You woke to a spectacular day in Wellington this morning, keen to discover more about the construction of Memorial Park.

Looking Back in Time

You met with Matthew Tonks from the Ministry of Culture and Heritage in the Memorial Park Information Centre and found out a bit about the history of this area. The Mount Cook/Pukeahu area has always been important in Wellington’s history as a place for defence. A Māori pā was located here and later European settlers built their army, police barracks and prisons along Buckle Street. When the National War Memorial was opened in 1932 the plan was to also build a park but the economic depression hit and then the Second World War so it wasn’t until 2012 that the Government announced that it would put Buckle Street underground and create a new National Memorial precinct.

The Memorial Park Alliance was set up to work on the project but before the trench for Buckle Street could be built, archaeologists had to carefully uncover the layers of history and preserve the treasures that they found. You saw parts of old canons, a replica of the gun pit and even pottery and toys from the crèche that was located nearby. All these treasures have been preserved and can be seen in the information centre. You heard Matthew tell some amazing stories about the area; such as when ten Armstrong guns were brought to New Zealand in the 1880s during a time known as the ‘Russian Scare’, when it was feared that the Russians would invade New Zealand. One of these canons ended up in Wellington but it was never fired in battle.

The Vision for Memorial Park

Your trip to the capital city would not be complete without meeting someone from the Government. Chris Finlayson, the Minister for Culture and Heritage, dropped by to talk to you and the ambassadors about the importance of the Memorial Park project. He showed you some of the plans and explained how the park would provide a special area to remember those who have served at war. You can watch the video about this.

Wanganui Intermediate School asked challenging questions during our first audioconference and had obviously done their homework. Some students were worried about whether the new tunnel will be earthquake proof. Matthew explained that nothing is ever 100 percent earthquake proof but that everything has been designed to withstand earthquakes and not collapse. When the Buckle Street underpass is complete it will be able to cope with a 1 in 2,500 year earthquake event – that would be a large earthquake!

After a quick break for lunch you met up with Cole Meiring, a Project Engineer with the Memorial Park Alliance. Cole explained the stages of construction and it was easy to see just how complex this project is. Everything has been carefully planned to reduce disruptions to people living and travelling around Wellington. You can find out more in the video.

Tomb of the Unknown Warrior

To gain a better view over the construction site you had to put all your safety clothing on so you could climb the Carillon tower. Before heading up the tower Matthew showed you around the National War Memorial and you saw the Tomb of the Unknown Warrior. To serve as a focus of remembrance for the sacrifice made by all New Zealand servicemen and women, in 2004 a project was undertaken to repatriate the body of an unknown warrior for burial in this new tomb. The Unknown Warrior is one of over 250,000 New Zealanders who served in overseas wars. He is one of 30,000 who died in service. He is one of over 9,000 who have no known grave or whose remains could never be recovered. The remains are from the Caterpillar Valley Cemetery in Northern France, near where the New Zealanders fought in 1916.

At the base of the Carillon Tower there is an area known as the Hall of Memories. Inside there are six mini alcoves or chapels on each side of the Hall dedicated to the different branches of the New Zealand Armed Forces that have served in overseas battles. At the end of the hall sits a statue of a mother with her children to remember that those left at home also suffered during times of war.

You were given special permission to climb the Carillon tower with Matthew. After climbing several flights of stairs and ladders you made it to the top of the 50 metre tower. On the way up you saw some of the 74 bells that make up the Carillon instrument. The four large base bells are massive and include the ‘peace bell’ which weighs an incredible 12.5 tonnes. Although the Carillon is currently being restored and earthquake strengthened you were lucky enough to see how the bells are played. Large keys can be hit with your fist and feet to activate pulleys to ring the different bells. There are only a few people who know how to play the Carillon properly but you all had fun trying!

St Peter’s School asked questions during the second audioconference and it was quite special being able to talk to them from half way up the Carillon tower. Your climb to the top of the tower was rewarded with amazing views over the city and you could see the entire Buckle Street trench beneath you. Cranes, machinery and people were all hard at work on the site. Tomorrow you will be able to venture into the trench and see up close how construction is progressing. 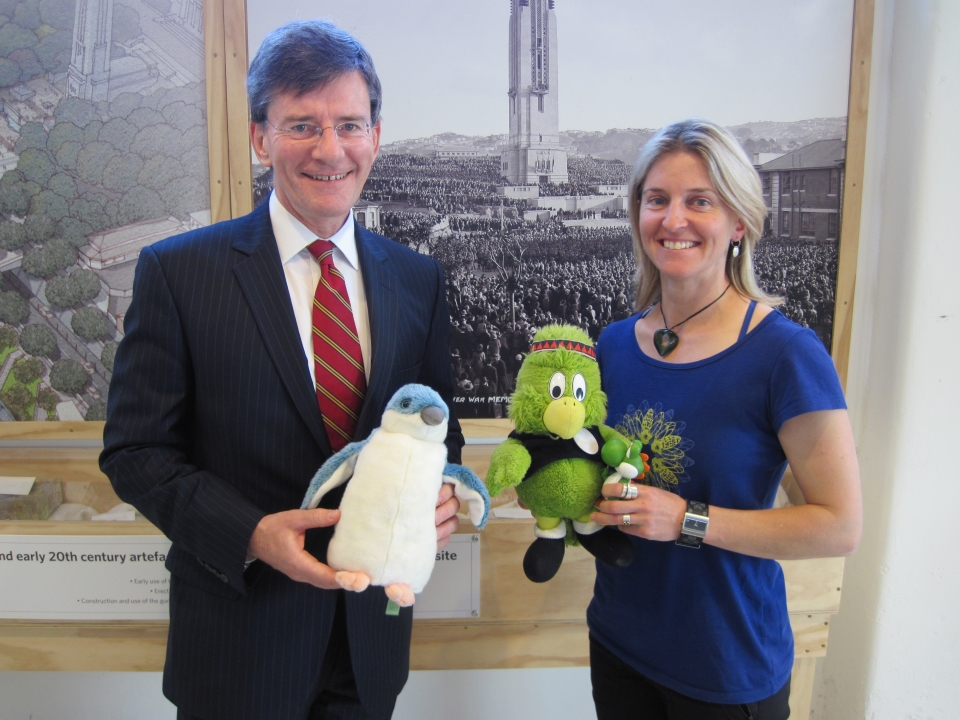 Minister for Culture and Heritage, Chris Finlayson talks to Shelley and the ambassadors about the Memorial Park project. Image: LEARNZ. 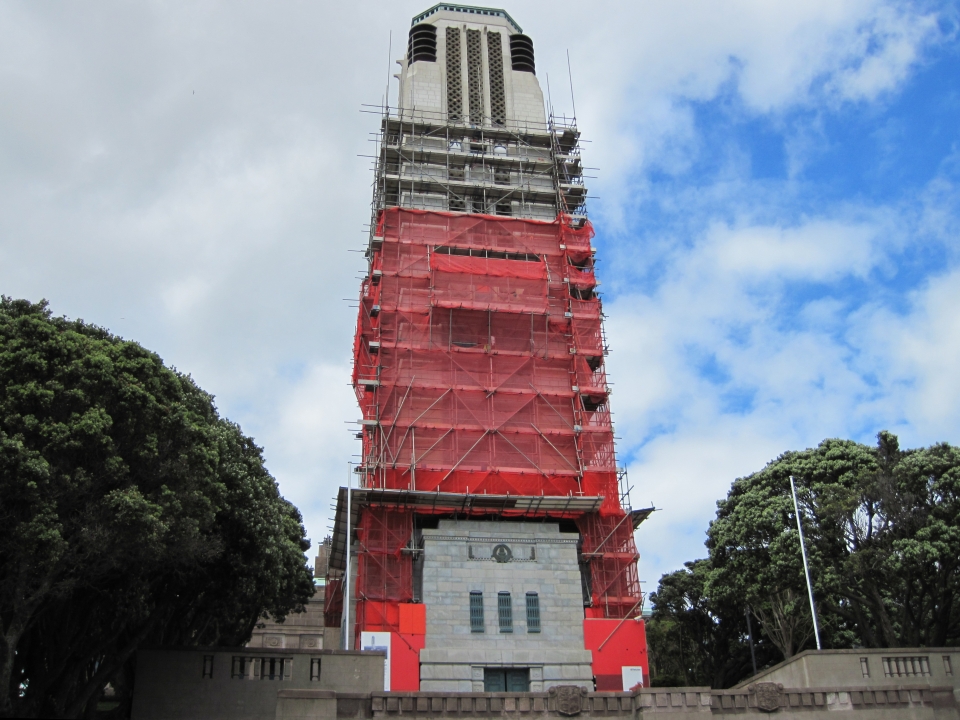 The Carillon Tower is part of the National War Memorial and is currently being earthquake strengthened. Image: LEARNZ. 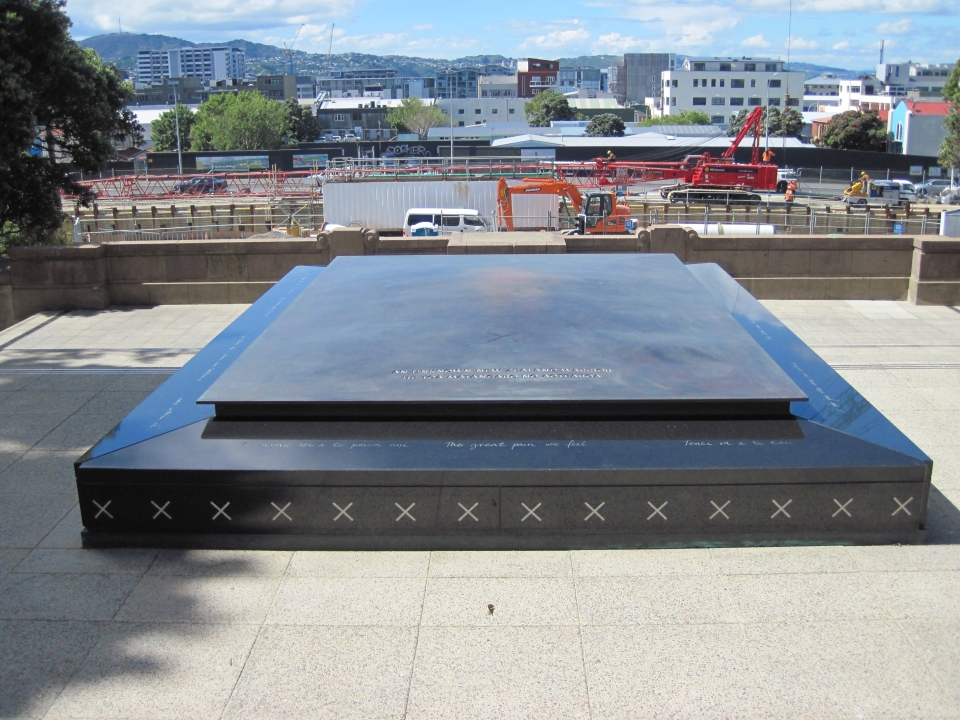 The Tomb of the Unknown Warrior forms part of the National War Memorial. Image: LEARNZ. 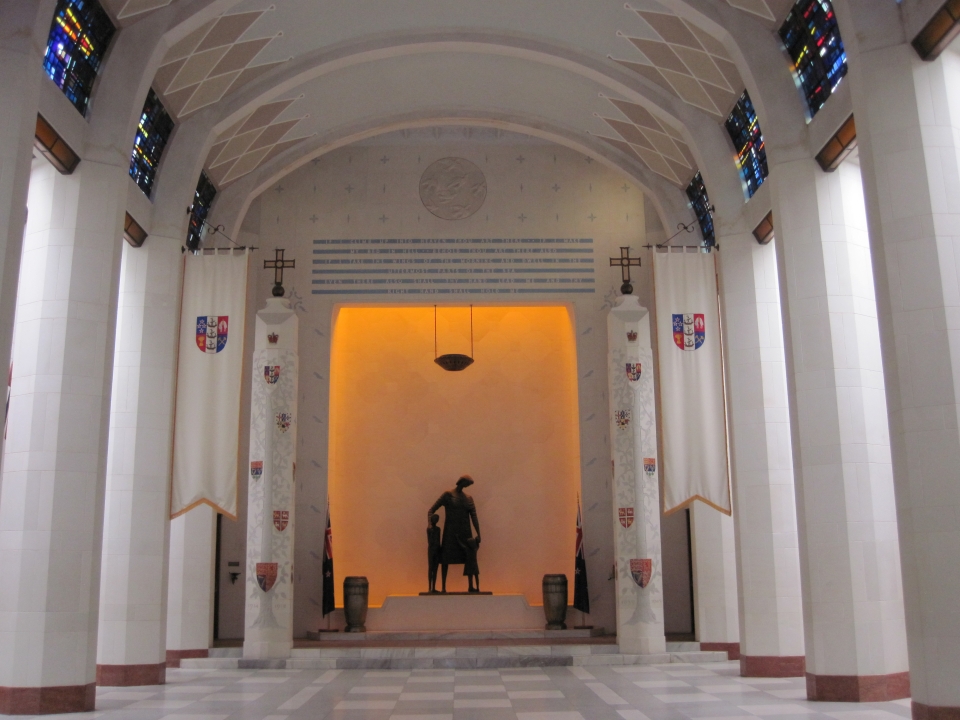 The Hall of Memories inside the National War Memorial has six mini chapels or alcoves dedicated to the different branches of the New Zealand armed forces. Image: LEARNZ. 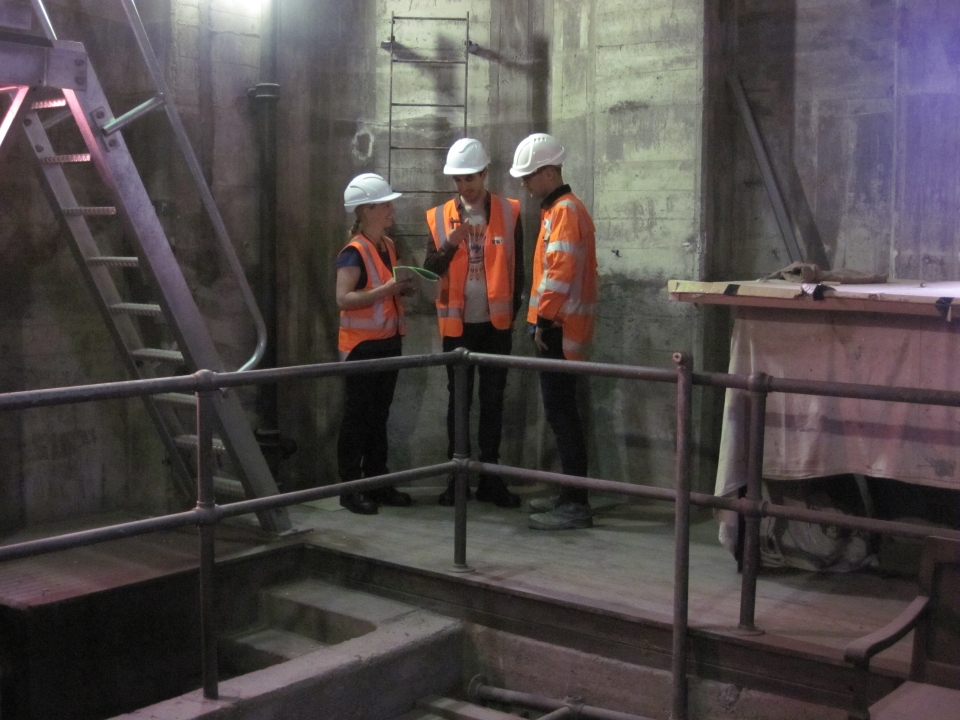 You can see some of the large bells that make up the Carillon instrument. There are 74 bells in total. Image: LEARNZ. 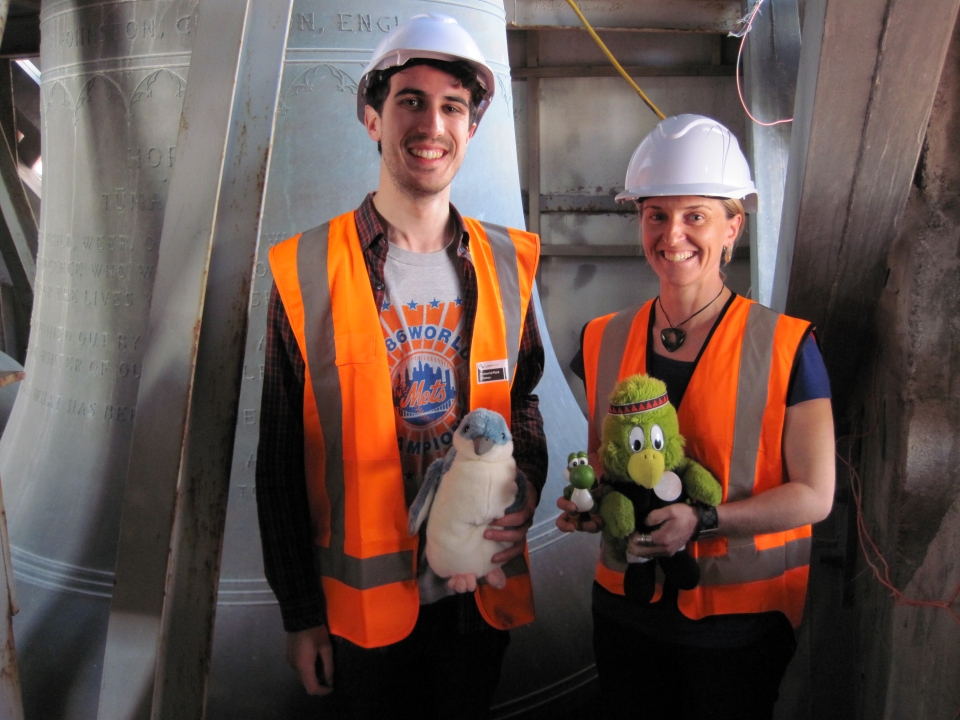 Matthew Tonks, Shelley and the ambassadors beside one of the four base bells in the Carillon. Image: LEARNZ. Shelley attempts to play the Carrillon. There are keys that can be hit with your fists and other keys you can tap with your feet. Image: LEARNZ. 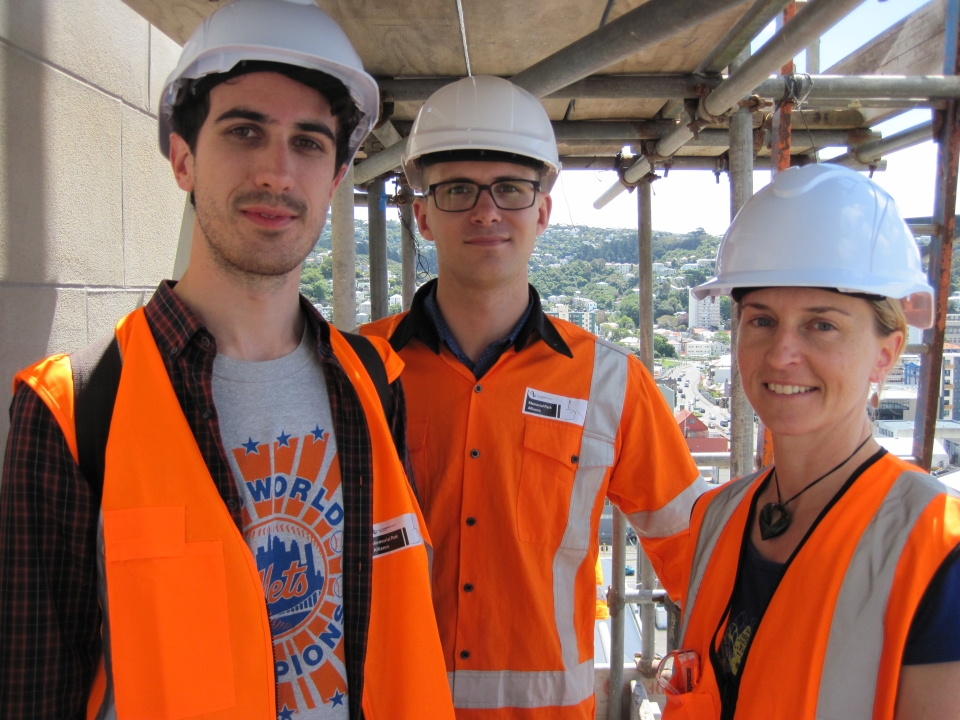 Matthew, Cole and Shelley venture out on to the scaffolding near the top of the Carillon Tower. Image: LEARNZ. 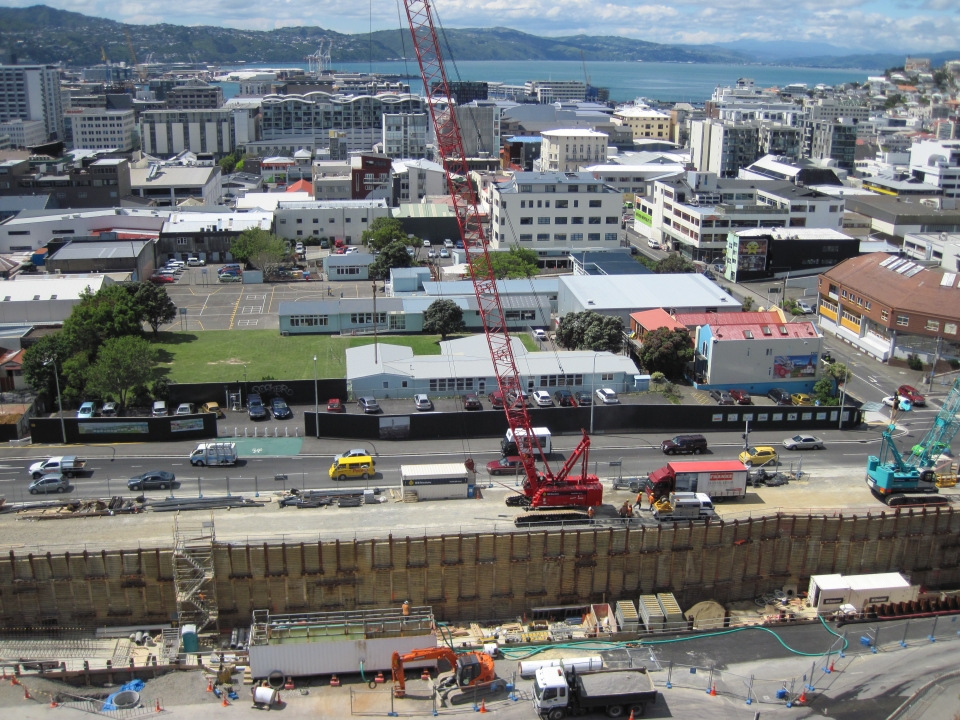 You can see the trench that will make up the Buckle Street underpass far below the top of the Carillon Tower. Image: LEARNZ.