The Antarctic sea ice supports a community of microorganisms that play an important part in the Antarctic marine food web. This community is called a Sea Ice Microbial Community or SIMCO.

The frozen seawater of the Antarctic seems like a place where nothing could survive. Yet, within this cold environment a surprising number of microorganisms live.

A microorganism is a microscopic organism that can only be seen by people with the aid of a microscope. A microorganism may be a single cell or multi-cellular. Microorganisms can live just about anywhere, including soil, hot springs, on the ocean floor, high in the atmosphere and deep inside rocks within the Earth's crust.

Microorganisms are important nutrient recyclers in ecosystems as they act as decomposers. Microorganisms live on the underside of sea ice and include;

Together, these organisms make up the sea-ice microbial community or SIMCO. SIMCO are well adapted to the extreme Antarctic conditions and are important members of the larger sea ice ecosystem.

What data have scientists gathered to show that SIMCO are an important part of the sea ice ecosystem?

Sea ice as a habitat

Sea ice is an ever changing habitat, shrinking and growing as temperatures rise and fall during different seasons and over longer time scales.

Because of the high salinity of seawater, new sea ice only begins to form once temperatures in the surface layers of the ocean (the first 100 meters below the surface) dip to –1.8 °C. The first ice crystals that form are known as frazil. As frazil forms, salt is squeezed out of the freezing water, creating a slushy mixture known as brine. Pockets of brine become trapped between ice crystals. However, because salt is denser (heavier) than water, brine is pushed out from the freezing crystals, and slowly drains downward into the bottom layers of sea ice.

Brine is filled with nutrients that attract salt-loving microorganisms. So SIMCO are mostly found in the bottom layer of ice. SIMCO form the foundation of the local food chain, serving as a food source for krill, which are eaten by fish.

The temperature of sea ice can drop to –35 °C, making it one of the coldest marine habitats on Earth. Although microorganisms do not appear to be able to sustain active growth at such low temperatures, once the ice warms to a cosy –10 or –5 °C, some extreme cold-loving sea ice organisms can grow.

How could you test the theory that microorganisms living in sea ice produce gel-like coatings to stop them from freezing?

There are still lots of questions about sea-ice microorganisms. Of particular interest to scientists is understanding how much these microorganisms contribute to the marine ecosystem.  It is thought that if microorganisms make up a significant percentage of biomass in polar ocean environments then all other organisms from algae to whales could be affected if sea ice melts in response to climate change. 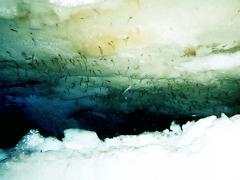 The undersurface of the pack ice in Antarctica colored green by algae. Antarctic krill can be seen feeding on the ice algae. Image: Kils & Marschall. 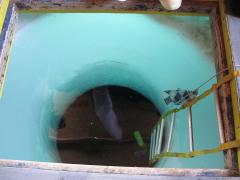 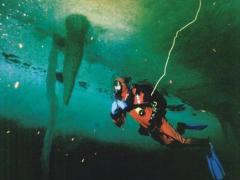 All divers are tethered to the surface during a dive below the sea ice for both safety and communication reasons. Image: R.Budd (NIWA) 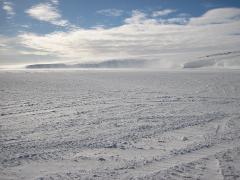 Find out more about SIMCO and what scientists have discovered about these communities.