During this field trip you will be following the work of Otago University scientists as they collect data about sea ice microbial communities and how they contribute to food sources relied upon by fish, penguins and seals.

Stephen Wing from Otago University in Dunedin will be leading a group of scientists and graduate students who will be working in Antarctica to find out more about Sea Ice Microbial Communities (SIMCO) and their role in the marine food web.

The goal of this project is to find out if plant life formed in sea ice is an important food source for coastal animals including the prey which seals and penguins rely on.

To find out how sea ice microbial communities fit into the Antarctic food web scientists need to be able to trace how much SIMCO contribute to the diet of different animals. Scientists are also interested in how this changes as the coverage of sea ice changes.

Scientists need to show what happens to the plant life produced in sea ice – where does it go?

What might we expect to see in this research?

Animals under permanent sea ice might be expected to have a higher proportion of C13 because they consume more organic material from SIMCO.

Research in the past has shown that SIMCO (the sea ice microbial community) is an important source of organic matter for consumers (animals) beneath the sea ice in McMurdo Sound.

The 2014 research will focus on the structure of the marine food web under the sea ice and use chemistry to track the amount of energy and nutrients from sea ice microbial communities up to the higher trophic level creatures like seals and penguins.

This project is important because it will help us to understand the connection between primary production within sea ice and the availability of food for animals feeding on organisms below the sea ice.

It will help provide new understanding of the role of sea ice for ecosystem functioning in Antarctica and how these ecosystems may change if there is less sea ice due to climate change. 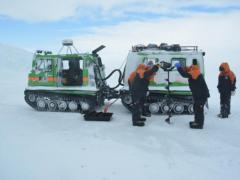 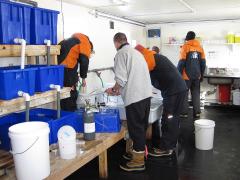 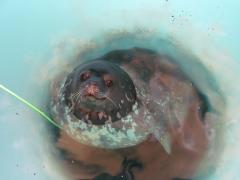