You have been at Scott Base for a few days now and are probably starting to get used to life in Antarctica. It seems to be easy to wake up in the morning because as soon as you open the shutters on your bunkroom window light streams through. Twentyfour hour daylight certainly allows you to pack more into the day.

After a large breakfast we talked to Havelock North Intermediate, Christian Renewal School and Jean Batten School. There were a few questions on what it is like to live in Antarctica and Kate talked about lots of rewards and challenges about which you can find out more by listening to the recorded audioconferences.

Back out in the field

The dive team had a rest day yesterday so they were keen to go back to collect more samples today. You met the team at Cape Evans Wall where Rebecca McMullin was just finishing her fishing. The dive hut at this site sits right beneath the glacial ice of Mount Erebus - you can see this in the panoramas. Rebecca is looking at two species of Antarctic fish; one pelagic species (lives up near the sea ice) and one benthic species (lives on the sea floor). Take a look at the photo of the fish that she caught and see if you can decide which fish lives in which environment. Rebecca is interested in finding out what these fish eat and whether they rely on food which eats sea ice algae or phytoplankton from the open ocean. She will take these fish back to New Zealand, dissect them and chemically analyse their muscle tissue for trace elements that will prove what food source they rely on.

Holes had been drilled in the sea ice so that Rebecca could fish. She used a short fishing rod with lures and a strobe light to attract the fish. Rebecca needs 60 fish for her research so she has had to spend many long cold hours out on the sea ice trying to catch fish. These fish didn’t look anything like the fish you see in New Zealand, probably because they have adapted to living in such cold water. Conditions under sea ice are very different from the conditions out in open water. The sea ice blocks out a lot of light and these fish even have a special anti-freeze protein in their blood. Rebecca uses red or white lures and a strobe light to attract the fish.

Down on the sea floor

When you look across the sea ice it is easy to think that not many animals can survive in this white wilderness. But under the sea ice there is a huge variety of animals living happily in the freezing water or on the sea floor. Anything that lives on the sea floor is known as benthic and the benthic community is surprisingly colourful. Sal Genovese described some of the creatures he had seen during his diving here. Sea stars, anemones, sponges and big worm-like animals called nemertean covered parts of the sea floor. Each of these animals has a part to play in the food web and lots of them rely on sea ice algae that fall from the sea ice and sink to the sea floor. You can watch the video about the benthic community.

An under sea ice survey

The dive team also went diving at Arrival Heights near McMurdo Station. The scientists are diving at different sites to get lots of samples but also to try and see how the thickness of sea ice affects the organisms that live below. The divers use a quadrat (a frame of a set size) to photograph animals living on the sea floor and to photograph the SIMCO (sea ice algae). By using a quadrat the scientists can estimate the number of certain species living in an area and compare this with different sites. This will help scientists understand what lives under more permanent sea ice compared with what lives under sea ice that melts back each summer. You may have used quadrats at school. You can see the divers using the quadrats in the videos.

Spending a day out in the field, zooming along on skidoos and helping out scientists can be exhausting. Take a break and join us again tomorrow for the final day of the Antarctica field trip. 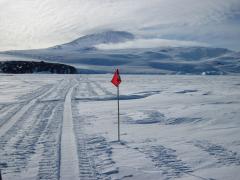 You headed out to the Cape Evans Wall dive hut to meet the science team this morning. Why do you think the scientists need to go to different dive sites? Image: LEARNZ. 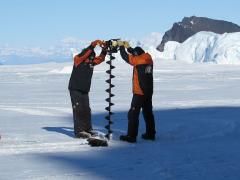 Jim and Steve drill a hole in the sea ice for fishing. How thick do you think the sea ice is? Image: Rebecca McMullin. 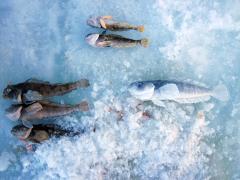 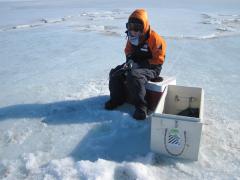 Rebecca patiently waits for a bite on the line. She needs to catch 60 fish. Why do you think she needs so many fish? Image: LEARNZ. 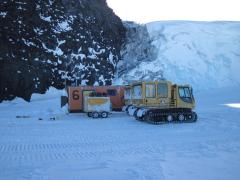 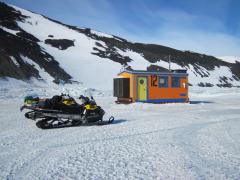 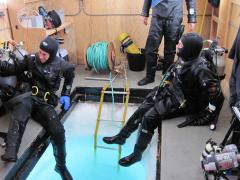 Sal and Steve prepare for another dive under the sea ice. Image: LEARNZ. 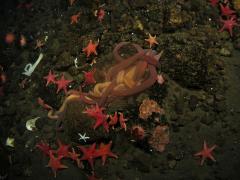 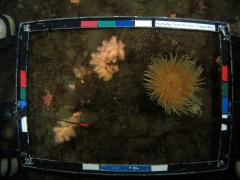 This photo records a quadrat sample taken on the sea floor under sea ice in McMurdo Sound. How many animals can you see in the quadrat and do you know what they are? Image: James Leichter. 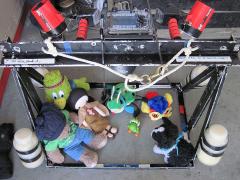 The ambassadors check out the quadrat which the divers have been using  in the water below the sea ice. Can you see where the camera is mounted? How many ambassadors are there in this sample? Image: LEARNZ.