Your time at Scott Base has flown by and the science team was keen to make the most of the last day by heading back into the field to find some seals. Before leaving base we spoke to Clifton Terrace Model School, Rosebank School and Glendowie School. Kate enjoyed answering their questions especially when students asked about some of the rewards and challenges of her science work. Listen to the audioconference recordings to find out more.

One of the highlights of this trip has been travelling out to so many new places on skidoos. Racing along the sea ice with clear views of Mount Erebus reminded you of how lucky you have been to experience Antarctica, especially in such fine weather. You met the science team who had travelled out earlier on the Piston Bully at Turtle Rock. This area usually has Weddell seals because it has big cracks in the sea ice where the seals can haul themselves out of the water. You had to walk the last one hundred metres up to the colony so that you didn’t scare the seals with the noise of the skidoos.

Weddell seals and their pups

Many of the seals were sprawled out on the ice basking in the sun and there were quite a few seal pups that were only a few days old. I was surprised at how big these pups are. Weddell seal pups are around half the length of their mother at birth, and weigh 25 to 30 kg. They gain about 2kg a day, and by 6–7 weeks old they can weigh around 100kg and begin to hunt for themselves.

It was incredible walking around the colony and hearing the seals call. You may have even been able to hear the shrill call of the seals under your feet as they swam beneath the sea ice. These seals can also make low booming sounds and Steve said that these can be really loud when you’re diving. The divers have seen a few seals this week during their ice dives, but today the scientists needed to be above the sea ice to collect samples.

Steve was after seal scat (pooh) so he could chemically analyse it to see what they have been eating in much the same way as he will for the penguin guano you helped collect on Monday.

Weddell seals are interesting because they are towards the top of the food chain and live in areas of persistent sea ice deep in McMurdo Sound. This means that these seals can give scientists a better idea of how the food web functions in this area. On a previous trip to the ice Sal and Steve saw a Weddell seal eating an Antarctic tooth fish. They are hoping that their samples will give evidence of how important this food source is for these seals. You can find out more in the video.

You have been lucky enough to see what lives both above and below the sea ice during this field trip and gain an understanding of how important the sea ice is to this ecosystem where everything within the foodweb is interconnected. It was hard to leave the seal colony and the cute little seal pups once all the samples had been collected but at least you had time for one last look around.

Before heading back to base you were able to go exploring at the Erebus Ice Tongue which is a long narrow finger of glacial ice that meets the sea ice. Last summer the sea ice in Mc Murdo Sound melted almost completely away. When the sea ice breaks out like this it means that the sea waves can erode the ice more and the sea ice is weaker the following year. Where water meets the glacier, caves have formed. You discovered a gap in the ice that led into a huge ice cave with narrow passages and large caverns. Delicate ice stalactites grew down from the walls of the ice cave and everything inside the cave glowed blue. Watch the video taken inside the cave. It was an amazing world of ice and a special place to end your Antarctic journey.

During this busy week you have worked with scientists to collect samples from penguins, sea ice algae, the sea floor, fish and seals. Once these samples are analysed back in New Zealand the data will give scientists evidence to help them better understand the Antarctic marine food web. It will also help predict what might happen in the future. It has been a privilege and a pleasure to share this amazing Antarctic adventure with you and I hope you have enjoyed it as much as I have. 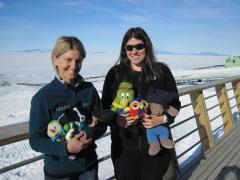 Shelley, Kate and the ambassadors check the weather outside Scott Base just before this morning's audioconferences. Image: LEARNZ. 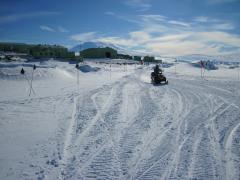 You left Scott Base on skidoo to go and search for seals at Turtle Rock. Image: LEARNZ. 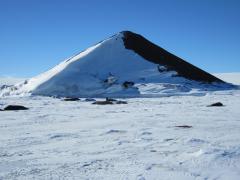 This island is known as Turtle Rock and is home for a group of Weddell seals. Why do you think the seals are here? Image: LEARNZ. 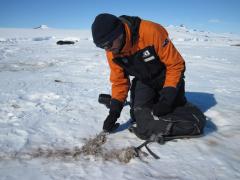 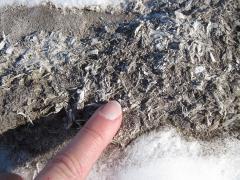 Weddell seal scat; can you see the bone fragments in this scat? What kind of bones do you think these are? Image: LEARNZ. 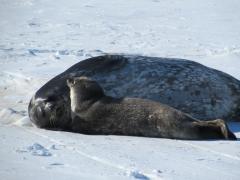 A Weddell seal and her pup enjoy the sunshine at Turtle Rock. How old do you think this pup is? Image: Rebecca McMullin. 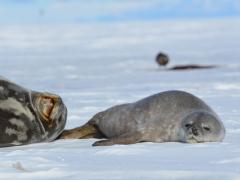 Weddell seal pups are about 25-30 kg when they are born and can hunt for themselves in 6-7 weeks. Can you see the skua in the background? Why do you think skuas hang around seal colonies? Image: Steve Wing. 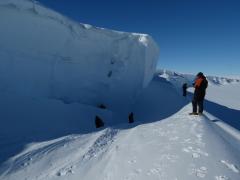 Can you see the entrance to the ice cave at the Erebus Ice Tongue? Image: LEARNZ 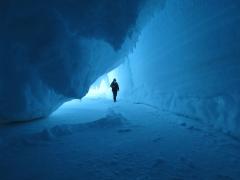 Come into the ice cave that has formed in the Erebus Ice Tongue, a glacier that flows down Mount Erebus and meets the sea ice. How do you think this cave formed? Image: LEARNZ. 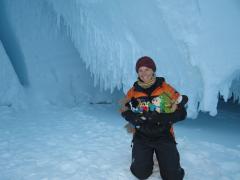 Shelley and the ambassadors explore narrow passages within an ice cave. Image: LEARNZ.