Date:
Wednesday, August 26, 2015
Field Trip Name:
Smart Motorways
Field Trip Place:
Wellington
Weather:
Fine
Where You Are:
On and around the smart motorway

You were met with a crisp, clear Wellington day this morning – quite a contrast to yesterday. It was a later start than yesterday morning too, so it was interesting to experience some of the very congestion the smart motorway is trying to ease as we drove to the site office from Johnsonville.

First for the day was the second audioconference and the less formal chat session in the LEARNZ Adobe Connect meeting room. The speaking school for the audioconference was Bellevue School in Newlands, which is almost just around the corner from the smart motorway site office. Glen Prince, Project Manager for the smart motorway, was the morning’s expert answering the questions. You can always listen to an audioconference recording if you missed the live version.

Lighting up on the smart motorway

One of the most visual parts of the smart motorway are the electronic variable message and lane control signs. This morning you had a look at a whole bunch of them currently in storage, waiting to go up on the new gantries. The message signs sure are big! You don’t realise just how big they are when up on the gantries and viewed from a car.

Bruce Walton explained how the signs work and how they play a key role in the smart motorway system. The term ‘variable’ means they can and do change, depending on the message being given to motorists. You can watch the video or read the background page What is a Smart Motorway for more of an idea of how the system works.

You then met Adrian Grainger to find out more about the gantries. The gantries are large structures that go right over the motorway and hold up the signs. You can imagine they have to be very strong – not only to hold up the big signs but to also withstand other conditions such as strong winds that Wellington experiences.

That part of the motorway has to be shut down when putting in the gantries so the work is actually done at night. Sometimes people using the motorway wonder why no one is working on certain sections of the road. But it is important to know that decisions to not work at certain times is so that disruptions to motorists’ journey times are kept to a minimum.

Soon it was time to visit a section of the construction site. After putting on some PPE (personal protective equipment) you took a drive to the northern end of Thorndon Overbridge where you met site engineer Jack Gillard. It was great to get out and about on the construction site and be amongst the hustle and bustle of the work taking place. It sure was noisy with all the motorway traffic racing past!

Jack described the amazing engineering that went into repurposing an old off-ramp from the bridge part to form part of the extra northbound lane that is being constructed. You can watch the video for an explanation of how this was done, and you can also read about it in the smart motorway project update number 3 or this NZTA media release.

Finally today, you met project engineer Dan Edwards. Dan took you to another part of the motorway construction site where the central median barrier is being replaced. The old barrier is quite wide, so they need a narrower one to help create more room for the extra lanes. I must say the new barrier looks much better, especially with the stylish etchings being put on some of the sections!

The barrier is made of concrete. A large machine constructs the concrete segments on site, and can be described as being like a giant 3D printer. A total of three kilometres of central median barrier will be replaced, and there is a fair bit of drainage work to be sorted as well. Drainage is important so that when it rains there is no pooling of water on the road which would be dangerous to motorists. Draining water away from a motorway may not have been something you ever thought about, as it is something you never see.

Like drainage, there are many hidden features of this smart motorway. And because the features are hidden, it is easy to take the whole system for granted. For me, finding out about all the work that is being put into the motorway is helping me to appreciate roads a lot more when I drive on them! 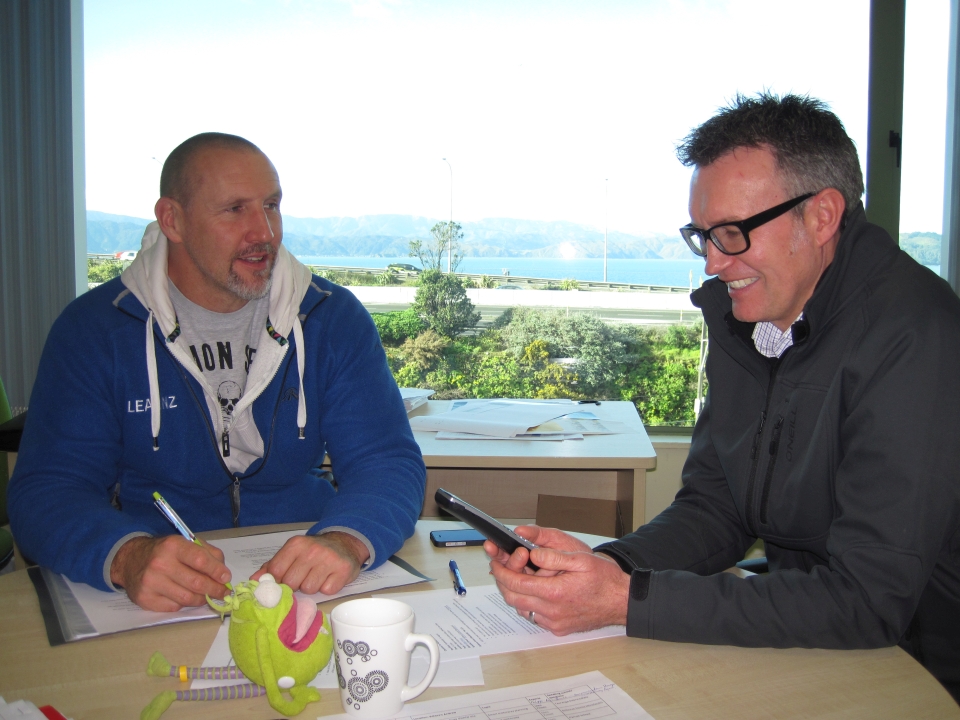 Andrew and Egbert listen as Glen Prince answers another question from this morning's audioconference. Image: LEARNZ. 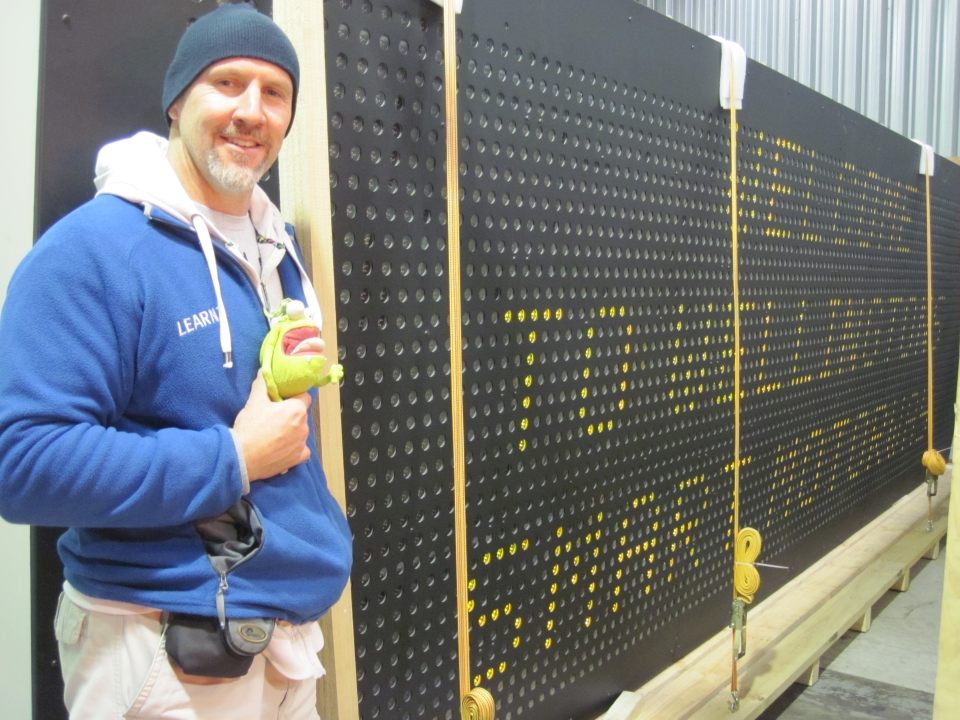 Andrew and Egbert stand next to one of the huge variable message signs. How do they help motorists? Image: LEARNZ. 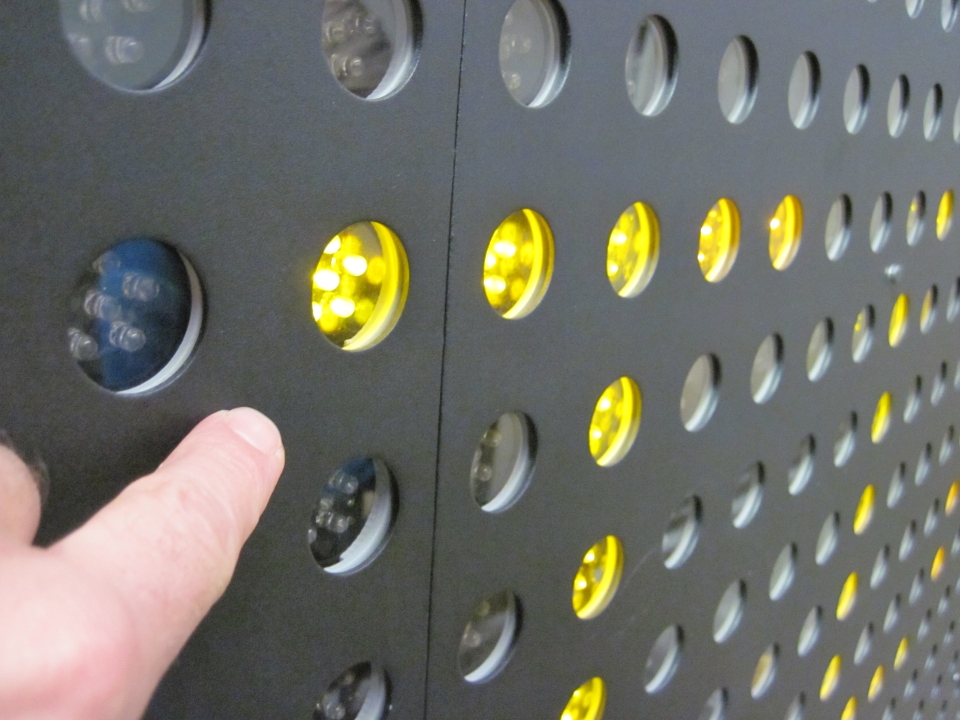 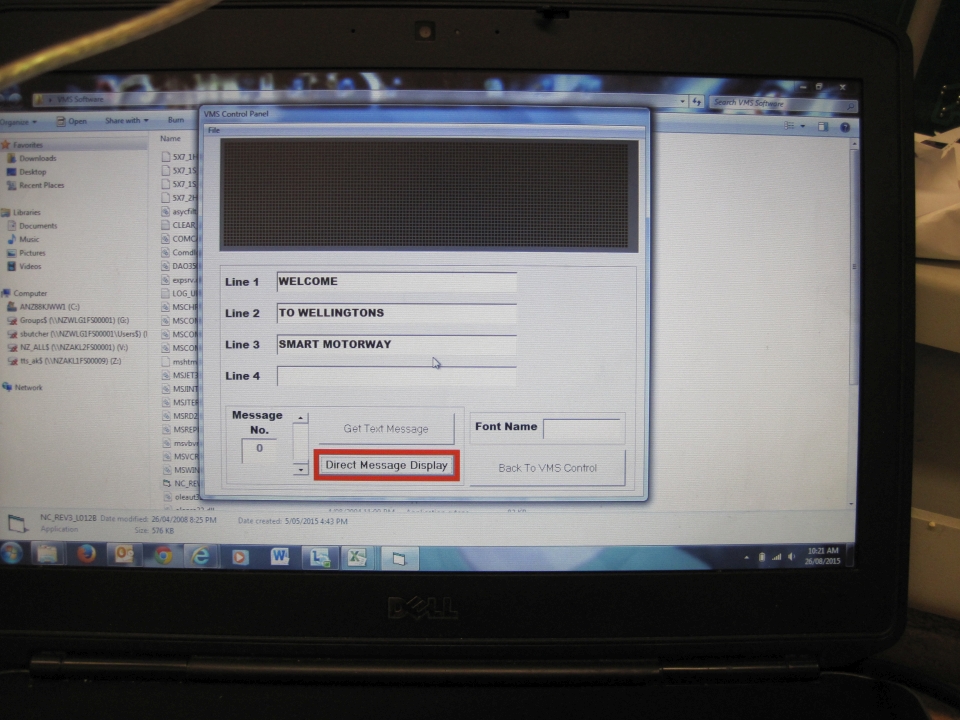 Messages are created with computer software that is linked to the signs. Image: LEARNZ. A look at the circuit boards inside the variable message signs. Image: LEARNZ. 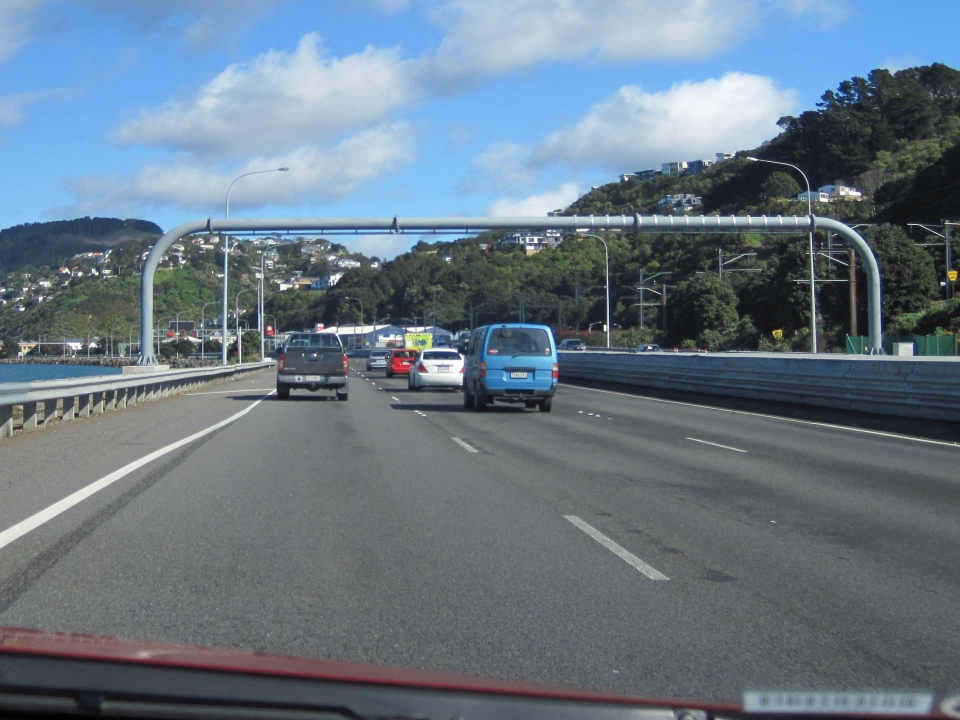 About to drive under one of the new gantries that will hold the new variable message signs. Image: LEARNZ. Part of the Thorndon overbridge that has been adjusted to create what will be a fourth lane. Image: LEARNZ. 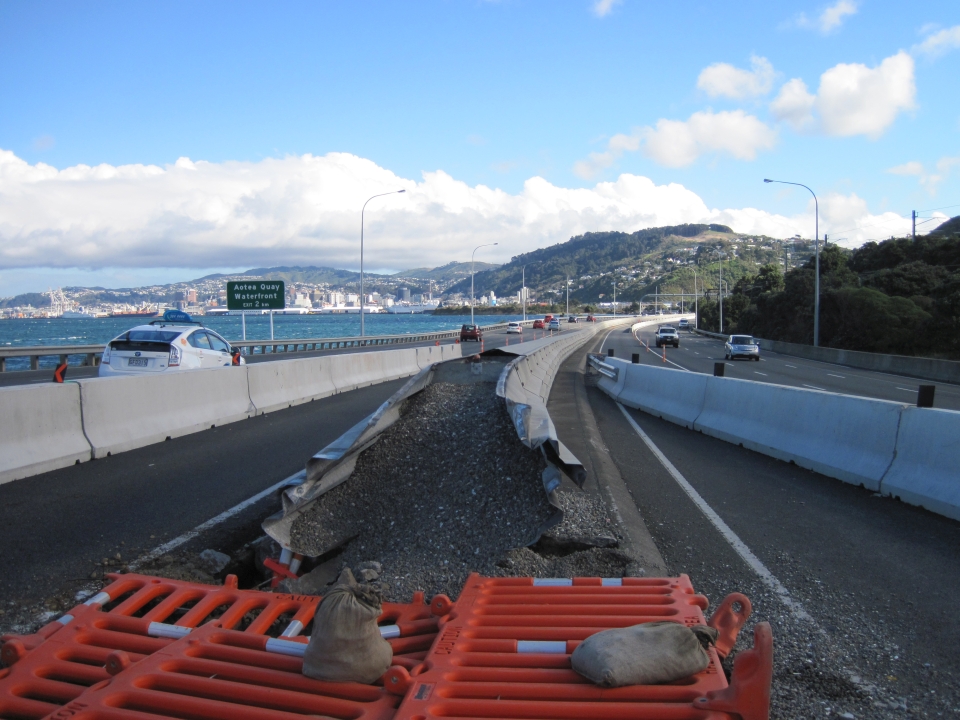 A look at the old central median barrier. I wonder what is being done with all the pebbles that were used to fill it. Image: LEARNZ. 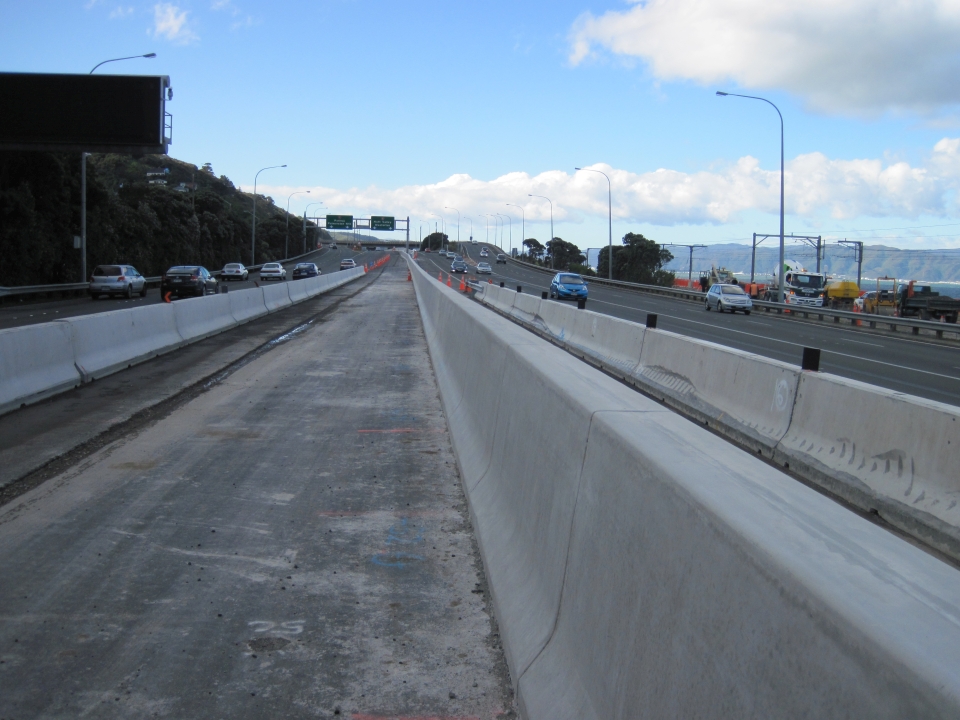 A view of the new central median barrier. Why is this better than the old one? Image: LEARNZ. 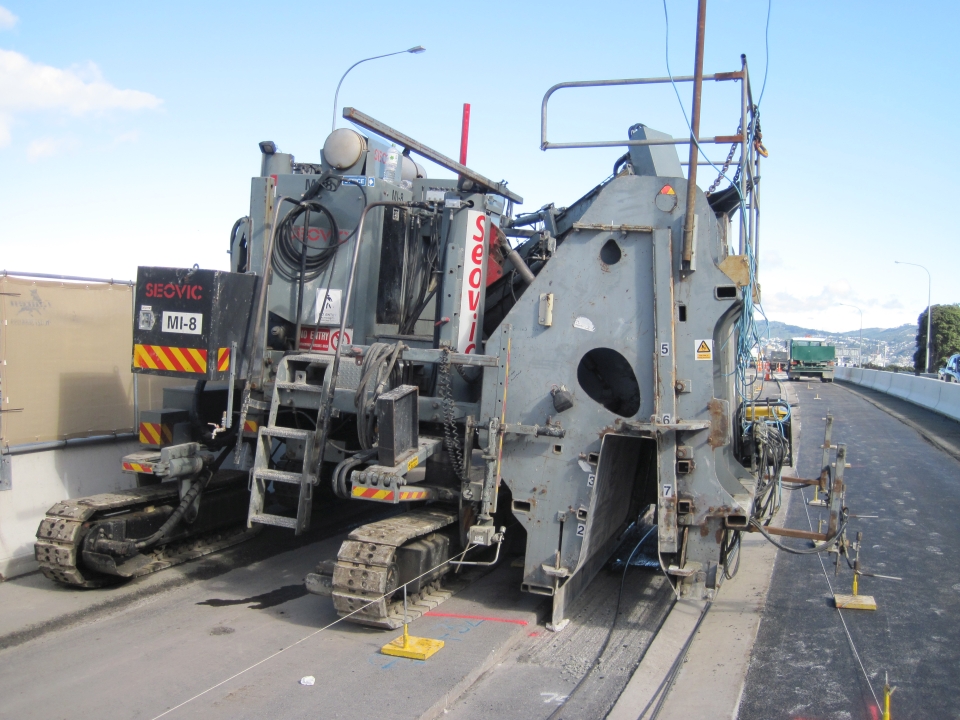 This is the machine that builds the concrete sections for the median barrier. Image: LEARNZ. 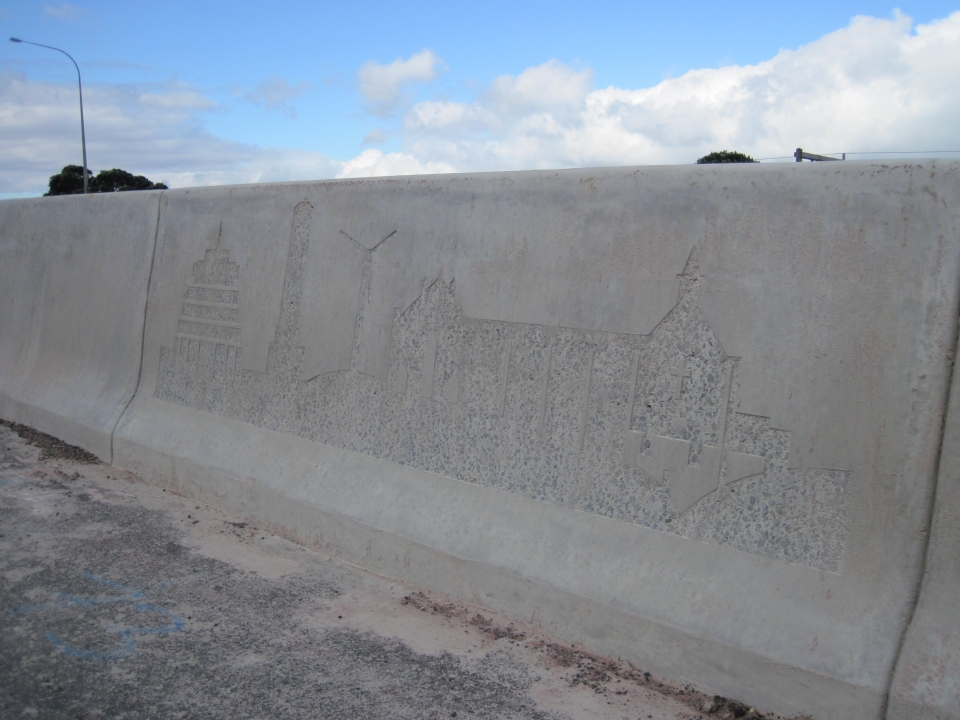 Etchings in one of the new concrete median barrier sections. Do you recognise any of the features in the picture? Image: LEARNZ.